Since you may only be in town for a short visit, The Growler Magazine put together a simple and convenient guide to help you find the best places to grab a pint in or around the skyways that connect U.S. Bank Stadium to downtown. 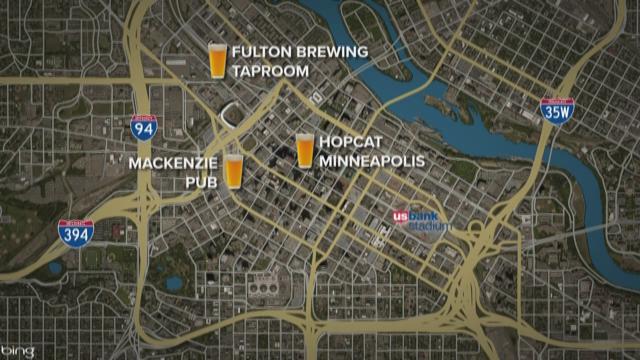 Read more from The Growler Magazine.

MINNEAPOLIS - There are now more opportunities than ever to drink great, local craft beer in the Bold North. Minnesota is now home to 150 breweries and brewpubs, and dozens of them are concentrated in the Twin Cities metro area, giving visitors in town for the big game a super opportunity to see what the Land of 10,000 Drinks has to offer.

Since you may only be in town for a short visit, we’ve put together a simple and convenient guide to help you find the best places to grab a pint in or around the skyways that connect U.S. Bank Stadium to downtown.

Spanning more than 80 full city blocks over 11 miles, the interconnected pedestrian paths and tunnels of Minneapolis’ skyways make up the largest such continuous system in the world. But this climate-controlled indoor streetscape can be a bit of a divisive issue here in the Bold North, where we take our reputation for cold weather hardiness very seriously.

“I don’t hate the skyways, but I don’t think they’re good for Minneapolis and I love Minneapolis,” local entrepreneur and founder of the Skyway Avoidance Society, Eric Dayton, told KARE 11. Dayton says he founded Skyway Avoidance Society because he believes the year-round skyway system has negatively impacted the vibrancy of Minneapolis’ street-level business culture. “To me this is more about being pro-downtown than anti-anything.”

Whether you’re a hardy northerner who’s down for some outdoor adventure, or a you’re an out-of-towner looking to stick to the skyways, you’ll be able to find something that suits you in our guide to drinking great beer downtown.

One of Minneapolis’ hottest dining and drinking destinations right now, the North Loop, is home to a handful of quality craft breweries and a bevy of fine dining and drinking establishments. Our first featured stop of the day is Fulton Brewing Company’s downtown taproom. In the shadow of Target Field––and just a couple blocks off the skyway––Fulton was the first taproom opened in downtown Minneapolis after the Surly Bill, which allowed Minnesota breweries to sell their pints on premises. With a wide variety of quality craft beer, Fulton is sure to be a crowd pleaser with your Super Bowl squad.

Mackenzie Pub is a haunt for beer industry folks like Brian Hoffman of Fulton (right) and Patrick Mulcahy of Indeed (second from left). (Photo: Aaron Job, The Growler Magazine)

As long as I’ve been drinking beer downtown, Mackenzie Pub has been a regular stop. With a reputation for quality craft beer and a kitchen cranking out some great from-scratch cooking, this “American Bar with a Scotch Flavor” is a great place to gather with friends for beer or food. Located on Hennepin Avenue in the heart of downtown’s theater district (and just off the skyway), Mackenzie has a heated outdoor patio, plenty of TVs, and bar games galore. Stop by for a pint and stay for some Scotch eggs.

Other notable dining and drinking establishments in the vicinity:

- Mercy (make sure to hit the downstairs Library Lounge)

HopCat opened their first Minnesota location in July at the corner of Nicollet Mall and 5th Street, mere blocks (by skyway no less) from U.S. Bank Stadium. HopCat has 80 taps, more than half of which typically feature Minnesota-made beers.

HopCat in Minneapolis has 80 beers on tap, more than half of which are typically from Minnesota. (Photo: Emily Haavik, KARE 11)

Other notable dining and drinking around U.S. Bank Stadium:

Credit: Emily Haavik, KARE 11
Joseph Alton has a pint at HopCat in Minneapolis.

For the skyway avoiders

For those of you willing to brave the elements, some of the city’s best beer drinking can be found on the fringe of downtown. Less than a mile to the east of the stadium (about a 15-minute walk) is one one Minnesota’s most venerable and well-respected pint purveyors. Minneapolis’ award-winning Town Hall Brewery offers a diverse selection of excellent craft beer and some of the best brewpub grub the state has to offer. It also happens to be right across the street from one of the best craft beer bars in the country.

Other drinking and dining worth the walk: