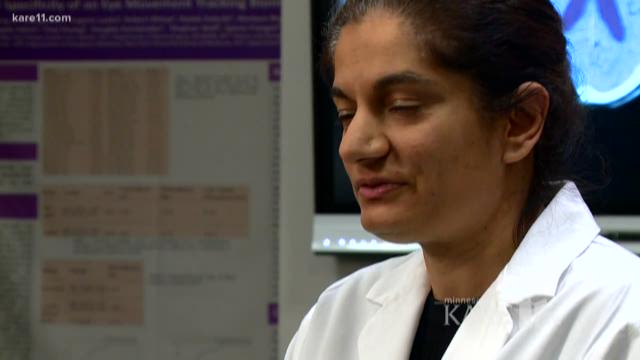 As the Vikings prepare to play the Saints in the playoffs, Hall of Fame quarterback Brett Favre is making news for his comments about the last time the two teams met in the 2009 playoffs, telling KFAN radio about what he considers an undiagnosed head injury.

"If head ringing, or fireworks going off (in your head) is a concussion, yeah I did have that," Favre said.

"You can't blame (the players)," said Dr. Uzma Samadani, a neurosurgeon and the Chair for Traumatic Brain Injury at Hennepin County Medical Center. "When Brett Favre was out there he was incredibly happy because he loved to play the game."

Though Dr. Samadani says she knows players are often determined to stay on the field, as a concussion spotter for the NFL, she'll be there on the sidelines of US Bank Stadium this weekend trying to save players from themselves.

"It can be hard because there's a lot going on on the field and you can't see everything," Samadani said. "That's why they do have two spotters at the games and now for the playoffs they're adding a third spotter."

By next season, she says she's hopeful the additional oversight will extend beyond spotters, but it hinges on if the FDA will approve a new tool for diagnosing concussions.

Dr. Samadani is referring to eye-tracking technology that helps quickly identify whether someone is experiencing symptoms of head trauma.

"We can detect the pupil position," Dr. Samadani said. "You can see whether eyes are moving in coordination or not."

The eye-tracking cameras could soon eliminate cheating on baseline concussion tests. Once you stabilize your head in front of the cameras, all you do is watch a video as it moves around the screen for about four minutes.

Dr. Samadani says research, including six published papers, shows a lack of eye coordination is a serious sign of trouble.

"The amount of (eye) disruption correlates with the concussion symptoms that someone is having after a blow to the head," she said.

She says the technology could help the NFL quickly diagnose players faster and with more certainty, but she says it has even more potential beyond the field.

"The irony of football, in my mind, is that it has shed this massive light on the long term consequences of brain injury but brain injury happens to everybody," Samadani said. "Almost half of people in society will have a brain injury at some point in their life."