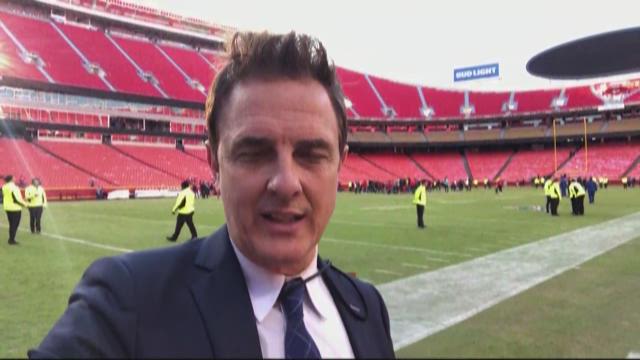 KANSAS CITY, Mo. — Harrison Butker matched a career long with a 54-yard field goal to tie the game late in the fourth quarter, then drilled a 44-yarder as time expired to give the Kansas City Chiefs a thrilling 26-23 victory over the Minnesota Vikings on Sunday.

The first person to greet Butker in celebration? Patrick Mahomes, the reigning league MVP, who missed his second consecutive game as he recovers from a dislocated kneecap.

Mahomes looked just fine rushing onto the field to party.

Matt Moore started in his place and threw for 275 yards and a touchdown without a pick, and he made the crucial plays when they mattered. Moore hit favorite target Tyreek Hill to convert a crucial third down and set up the tying field goal, then hit him again to make the winner more manageable.

Hill finished with six catches for 140 yards for the Chiefs (6-3), including a spectacular TD grab, while Damien Williams ran for 125 yards — most of it on a 91-yard touchdown run.

Kirk Cousins threw for 220 yards and three touchdowns for the Vikings (6-3), though he struggled to deal with the Chiefs' blitzes late in the game. Dalvin Cook was held to 71 yards rushing while top wide receiver Stefon Diggs had a single catch for four yards.

They largely controlled the first half, building a 10-7 lead with the ball in the closing minutes. But they proceeded to go three-and-out, the Vikings marched downfield for a tying field goal, then got the ball back when Mecole Hardman fumbled the opening kickoff of the second half .

Suddenly, it was the Vikings who had taken control.

They needed just five plays to punch it into the end zone, despite a holding penalty setting them back. Amir Abdullah finished it with a 17-yard catch in which nobody was within 10 yards of him.

Hardman hurt the Chiefs again by failing to call a fair catch on a punt downed at their 3. But that flub was rendered irrelevant when Williams took a handoff, found a gaping hole on the left side of the line and made the only safety in front of him miss on a 91-yard touchdown run .

Minnesota answered in the seesaw affair.

Leaning heavily on Cook, the league's leading rusher, the Vikings marched 75 yards without facing third down until the final play. That's when Cousins hit Kyle Rudolph from 3 yards out for the score, taking advantage of a Kansas City defense with just 10 players on the field.

After trading punts, the Chiefs put together another drive. Moore hit Hill to convert a key third down, and Butker matched his career long with a 54-yard field goal with 2:30 to go.

It was a monumental kick — and he had another coming a couple minutes later.

Chiefs DT Chris Jones, back after missing three games to a groin injury, wreaked havoc at the line of scrimmage. He was instrumental in holding Cook in check, harassed Cousins all game and forced an incompletion that led to the Vikings' final punt of regulation.

Vikings: WR Adam Thielen left late in the first quarter after aggravating a hamstring injury that first occurred against Detroit and kept him out last week against Washington.