One Vikings fan is hoping to end the season on a more positive note, with some #MinnesotaNice. 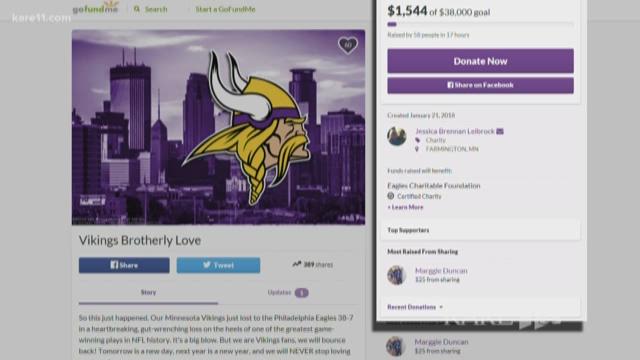 MINNEAPOLIS - The Minnesota Vikings season came to an end Sunday night with a 38-7 drubbing at the Philadelphia Eagles in the NFC Championship.

Not exactly what fans who bleed purple and gold had hoped for. But one Vikings fan is hoping to end the season on a more positive note, with some #MinnesotaNice.

Jessica Leibrock of Farmington started a GoFundMe on Monday, with a goal to raise $38,000 for the Eagles Charitable Foundation, which serves low-income children in the Philadelphia area. The goal, $38,000, is $1,000 for every point the Eagles scored on the Vikings.

Last week, Vikings fans raised more than $100,000 for New Orleans Saints punter Thomas Morstead and his charity, What You Give Will Grow, after the sportsmanship he displayed following the "Minneapolis Miracle." Morstead is donating the money to Minneapolis Children’s Hospital during Super Bowl week.

"Let's welcome the Eagles to our house in two weeks by presenting them with a great big check supporting their charitable foundation," she added. "Let's show them what this fanbase is made of and welcome them with our version of some Brotherly (and sisterly) Love!"

Some Vikings fans are taking the high road and donating to the charity, despite reports Eagles fans were not the most welcoming to their guests from the Bold North on Sunday.

The Eagles will play the New England Patriots in Super Bowl 52 in Minneapolis on Feb. 4.