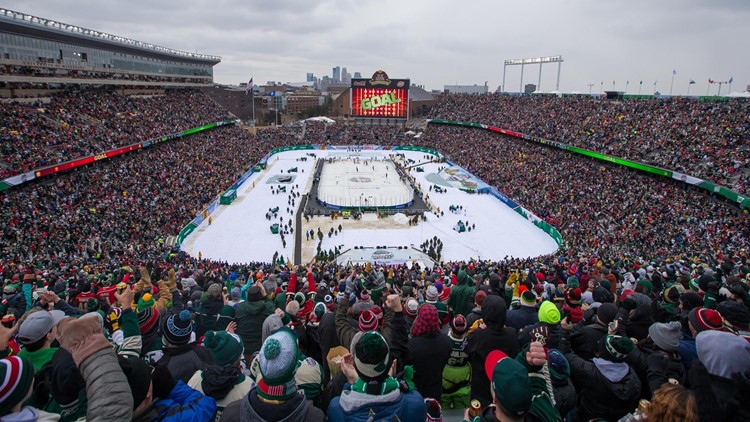 ST. LOUIS PARK, Minn. — The day after the Minnesota Wild were officially awarded the NHL's next Winter Classic, they fittingly had practice scheduled for one of the area's many outdoor rinks.

Eager to serve as a first-time participant in the 2021 edition of the league's signature regular season event to be staged at Target Field, the Wild also couldn't help but think, “What took so long?”

The organization has long lobbied to host this annual in-the-elements New Year's Day game, which began in 2008, touting a state where the sport's tradition is as strong as any in America with generations of skaters on frozen lakes and ponds and even hosed-down parkland.

“You just felt like the people here, they deserved one,” left wing Zach Parise said after the workout Thursday that was open to the public in St. Louis Park, a first-ring suburb of Minneapolis.

The Wild did play in a Stadium Series game in 2016 at TCF Bank Stadium, but those don't quite get the same exposure or carry the same prestige.

“It was a little overdue, but we finally got one, and we'll all enjoy it," said Parise, one of three Minnesota natives currently on the roster.

RELATED: 2021 Winter Classic coming to the state of hockey

The Wild lacked the brand power of most of the previous hosts, one reason why the NHL has been hesitant to send the game to Minnesota. Dallas became the 10th different market to hold one, when the Stars beat Nashville at the Cotton Bowl on Wednesday in the southernmost of the 29 outdoor games the league has sanctioned. There have been 12 editions of the Winter Classic, with Chicago, New York, St. Louis, Boston, Washington, Detroit, Philadelphia, Pittsburgh and Buffalo all getting a turn. Chicago and Boston each had two, one in a baseball venue and one in a football stadium.

The league has yet to decide the opponent, but a Central Division rival like Chicago, Dallas, St. Louis or Winnipeg is a good bet.

“The memory of growing up doing it, I think that's the cool part,” said center Eric Staal, who's from Thunder Bay, Ontario, just across the Canadian border with northeast Minnesota. “You did so much of it as a kid, for the love the game, just playing outside on the pond and fooling around.”

The Twins have long been interested in hosting the event, so they were more than willing to commit to the necessary winterizing of the ballpark. The building, which opened in 2010, has ample indoor spaces and radiant heaters for those not uncommonly cold and wet April games, but it was not designed for January use.

The Winter Classic was previously played in baseball venues in New York, St. Louis, Washington, Philadelphia, Boston and Chicago. Target Field will be equipped to sell about 40,000 tickets, far less than the crowd of more than 85,000 that packed the Cotton Bowl on Wednesday. That was the second-largest crowd in league history, behind the Winter Classic in 2014 that drew more than 105,000 to Michigan Stadium when Detroit was the host.

“It’s kind of serendipity that in our 20th anniversary season we get to host this outdoor game, so maybe it’s a good thing that we waited this long,” Wild President Matt Majka said.