After the whirlwind of packing his bags for a new team in Pittsburgh, Zucker took a few moments to compose a thank you to the State of Hockey. 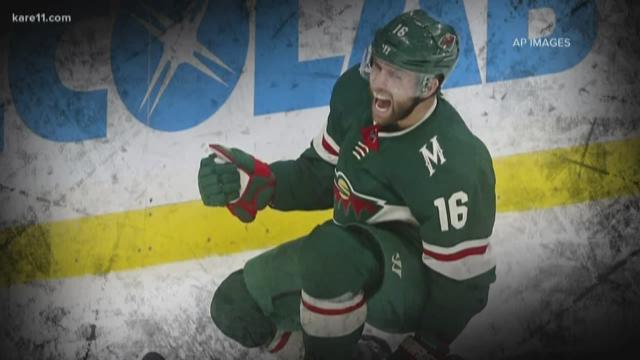 ST PAUL, Minn. — It was obvious when news of the trade broke (despite the fact it was expected) that Wild fans would miss forward Jason Zucker. Not just for the speed and scoring he provided on ice, but for the emotional investment he made in his community.

Now we know the feeling is mutual.

After the whirlwind of packing his bags and making his debut as a member of the Pittsburgh Penguins, Zucker took a few moments to compose a thank you to his Wild coaches, teammates, and the Minnesota hockey community.

"Minnesota will always be home," he posted on Twitter. "Minnesota is where I met my wife, watched Sophia grow up and welcomed Hendrix and Stella. We are grateful for the chance to share those experiences with Wild fans."

Zucker then mentioned the support Minnesotans have given to his GIVE16 foundation, which raises funds to benefit the Zucker Family Suite and Broadcast Studio. It's described as "a special place" within the University of Minnesota Masonic Children’s Hospital, where families and kids can go to watch Minnesota Wild games, record their own TV shows, and escape - if only for a couple hours - from their hospital rooms.

He went on to offer kudos to the Wild organization, and those who helped make him a part of it. "Thank you to my friends, my teammates, Bruce Boudreau and the rest of the coaching staff for teaching me over the years. Chuck Fletcher for drafting me, the Minnesota Wild organization for treating my family like gold, and to Craig Leipold for running a world class organization."

Zucker closed his Twitter post by looking ahead, making it clear that his new team in Pittsburgh is now a career focus."I am am excited to start our quest towards the Stanley Cup. Let's go Pens!"