Wild GM: 'If there is quit, there will be more trades'

Bill Guerin says he fully expects the Wild to make the post season and expects a playoff-type effort from his team. 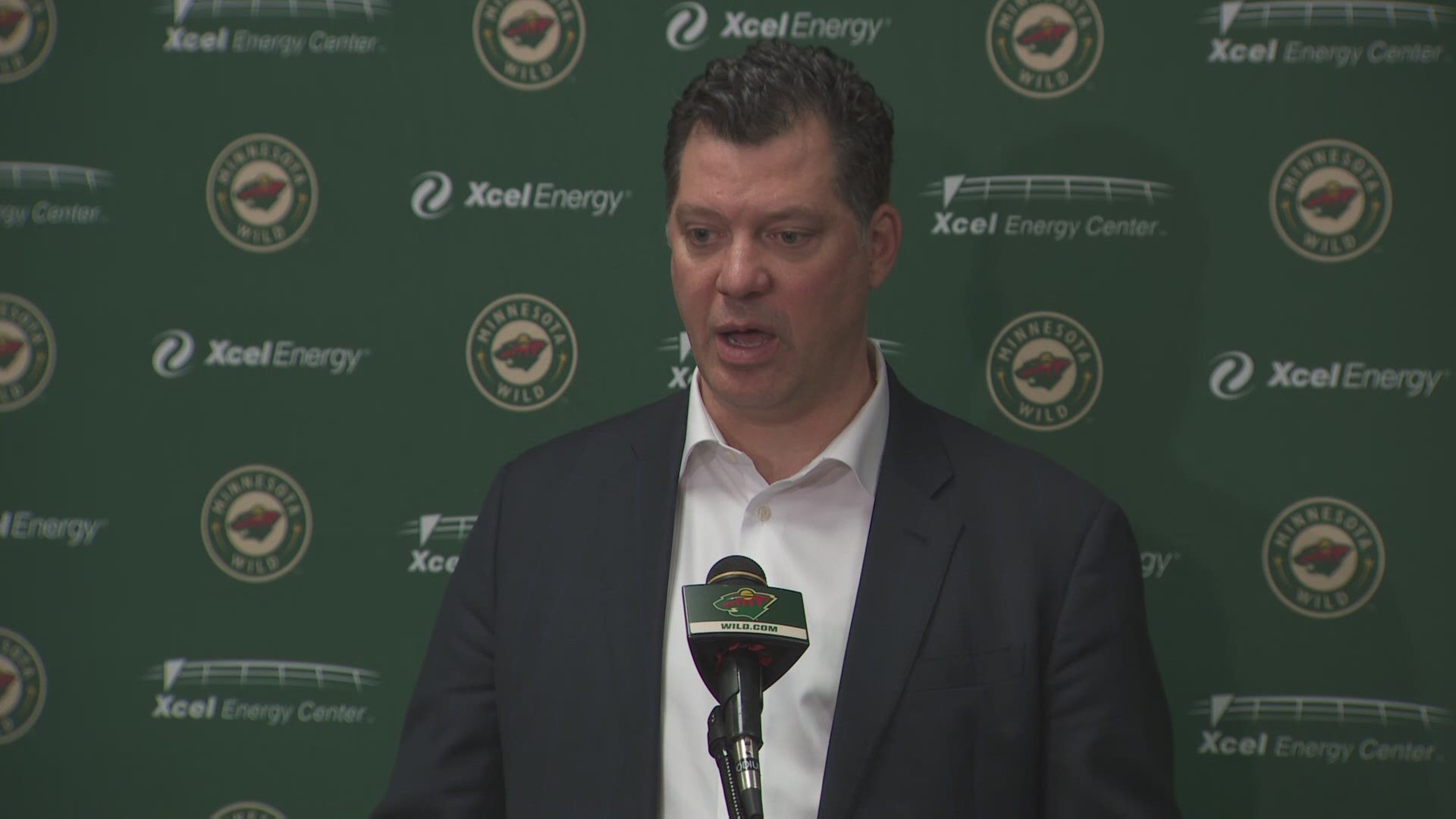 ST PAUL, Minn. — First-year Wild GM Bill Guerin admits he is still learning about his job and about the players he inherited when he took the reigns in St. Paul.

There is, however, one thing he is certain of: Guerin says he fully expects the Wild to make the post season, and expects a playoff-type effort from his team.

"I can promise you this, if there is quit there will be more trades," Guerin told reporters just hours after shipping left wing Jason Zucker off to the Penguins for center/wing Alex Galchenyuk, defenseman Calen Addison and a 2020 conditional first-round pick. "I wholeheartedly expect this team to compete for a playoff spot. We’re right there, and if there’s any signs of anyone taking their foot off the gas, that will be an indication."

Guerin says things were a bit quiet on the deal-making front until the past few days, but now things are heating up. That being said, he shared that the Wild's needs are well known to fellow GMs, and they're not easily obtainable.

"When there’s a definite need, wherever it is on any team, the other teams know what’s goin’ on with you too, and teams aren’t just giving up first and second line centers for free," Guerin explained. "So, they’re deals that are usually hard to make."

"We’re gonna do our best, we know where we stand right now, what we need to address, we’ll keep working towards it," the GM continued, "but like I’ve said in the past, I’m not going to make trades just to make trades and fabricate something that’s not good enough. If a deal makes sense we’ll do it, if not we’ll be patient and we’ll wait."

Guerin addressed other topics regarding the trade and the team Tuesday.

On the Wild's locker room culture and will to win:

"To be honest with you, I think the attitude of a winning team is a little more swagger, a little more confidence, a little more belief that we’re as good as anybody. And I didn’t quite feel that at the beginning, I didn’t feel that from the team when I was on the outside looking in, but getting to know these guys and seeing them on a daily basis and learning more about them as individuals and as a team, their attitude is great. These guys want to win,  they don’t just want to make the playoffs, they want to make the playoffs and make an impact. We have good people here."

"Sometimes you get caught behind the 8-ball a bit early on in the season, they have quite a few good players over there and it’s a little tougher to get on the first power play unit, or even the second power play to be quite honest."

"I know for a fact Alex is in great shape, he works really hard, he took the break in the season they had, he took the time to train and try to get better… he’s trying to do all the little things to get back to where he was before."

"When you look at it, he’s a third overall pick, he’s had success in this league, and sometimes you need to make a few stops along the way before you find someplace you’re going to have success. And maybe it’s here."

On young defenseman Calen Addison, who is still skating in Juniors:

"He’s gonna turn pro next year and we’ll see where he goes. We’ll take it step by step, but he’s a guy we want to make sure we go through the right process of development with, he’s extremely important to us. He’s very good on the power play, kind of like that quarterback type guy, a modern day defenseman."

He’s (Addisson) not 6' 4", but he skates really well, moves the puck, he’s got great hockey sense and he competes. Competes real hard, and like II said, knowing him from my time in Pittsburgh he’s a good kid and he wants to be a player."

On the gravity of moving a popular, entrenched player like Jason Zucker:

"It’s hard for those guys, I understand that, but we expect everybody to be professional and I have no doubt that they will. I also understand the human aspect of it because it’s not just the player on the ice, there’s wives and children involved in it, you’re uprooting a family and hey… I’ve been there, many times before, so I don’t take it lightly whatsoever. (Guerin was traded and relocated a number of times during his NHL career)