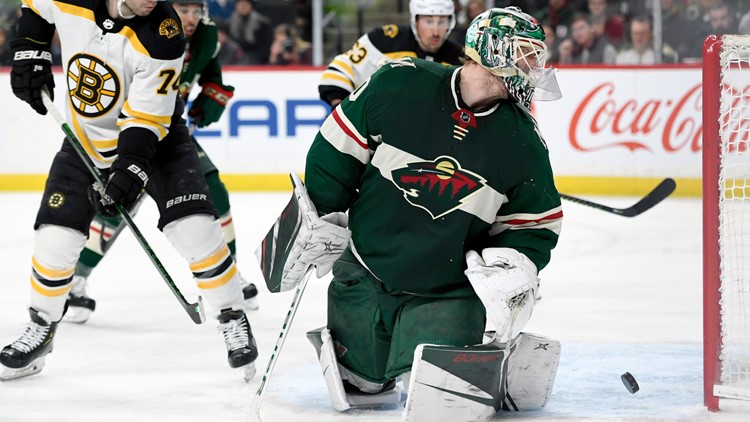 ST PAUL, Minn. — The Boston Bruins used the break to recharge their power play. The time off sure didn't slow David Pastrnak down. Then again, few opponents have done that this season.

The NHL scoring leader matched his career high with his 38th goal, Torey Krug scored twice and the Bruins had three power-play goals in the second period to surge past the Minnesota Wild 6-1 Saturday night.

“Just trying to help my team. That's the way I help the most, so hopefully I can keep going,” Pastrnak said.

Brad Marchand had a goal and an assist for the Bruins, who stayed strong out of their brief hiatus and improved to 7-2-1 in their last 10 games. Jaroslav Halak had 25 saves, holding the shutout until 5:29 was left on a shot by Mats Zuccarello. Then the Bruins tacked on two more goals after that, by Anders Bjork and Jake DeBrusk.

Pastrnak, who also had two assists, broke a tie on the league leader board with Washington's Alex Ovechkin. After tallying 35 goals in 82 games in 2017-18 and 38 goals in just 66 games in 2018-19, the 23-year-old right wing from the Czech Republic reached 38 goals in his 53rd game this season.

“He's not being selfish doing it. That's where we'll draw the line, if he's cheating behind everybody or making high-risk plays, and he's not,” coach Bruce Cassidy said.

David Krejci added two assists, one of five players with multiple points against goalie Devan Dubnyk. The Bruins converted all three of their man-advantage situations after scoring on two of four in a 2-1 win at Winnipeg on Friday night. They're second in the NHL on the power play at 27.3%, and they put on a clinic against the Wild. In their last four games before the break, the Bruins had an 0-for-15 slide.

Krug, who used some slick stick work to finish a drop pass from Par Lindholm midway through the opening frame, scored again early in the second period off a setup by Marchand. The initial shot glanced off Dubnyk's outside shoulder, hit the post and went off Dubnyk's back to bounce in.

Just 76 seconds later, after a second straight interference penalty on the Wild, Marchand's one-timer put the Bruins up 3-0. Then with 4:31 remaining before the second intermission, DeBrusk distracted Dubnyk during a save attempt, and the ever-dangerous Pastrnak, who was parked just outside a crowd around the crease, snagged the loose puck and snapped it in for the 4-0 lead.

Pastrnak is on full-season pace for 59 goals.

“He's such a happy kid. He loves the game," Krug said. "If he were able to do it, I think there'd be a lot of happy guys in this room.”

There wasn't much happiness down the hallway.

“One of the keys to the game was no lazy penalties," Wild coach Bruce Boudreau said. “If you’re not going to compete, you’re going to get penalties, and we didn’t compete hard enough. They won every battle. They won every race to the puck.”

The Bruins kept up their push for the Presidents' Trophy, now trailing the Capitals for the Eastern Conference lead by just one point with one more game played. Having revamped their roster last month by dumping veterans David Backes and Brett Ritchie, the Bruins could not have been happier about the way they skated out of the break. And Halak, whose steady goaltending has allowed for more rest for the stellar Tuuka Rask, delivered another winner.

The Wild looked rusty out of their eight-day break for the All-Star Game and their bye week, starting their final push for a spot in the playoffs in precisely the wrong way. They began the day six points out of the second wild card with games in hand on most of the teams in front of them, but they're in 12th place in the Western Conference with only 31 games to go. With a few more performances like these, general manager Bill Guerin could be prompted to sell before the trade deadline on Feb. 24.

“He’s been frank with us that he’s going to wait as long as he can," Wild defenseman Matt Dumba said, "but we’ve got to play better and we’ve got to show him that this is the group."

The Wild have the worst penalty kill in the NHL over the last two months, with a 65.3% denial rate since Dec. 1, allowing goals on 26 of 75 short-handed situations.

“If I start talking about it I’m going to start using names. I’m not going to talk about it," Boudreau said. "It’s just obviously as bad as you can possibly get in this league.”

NOTES: Dumba, who wears No. 24 like the late Kobe Bryant did in the NBA, honored one of his favorite childhood athletes during warmups by wearing “Bryant” on his jersey. ... Wild center Ryan Donato, who was acquired last year in a trade with the Bruins for center Charlie Coyle, was scratched for the second straight game. ... Marchand has six goals and seven assists in 14 career games against the Wild.