"Hey, who wants to come to North Korea to play hockey with me?," said 30-year-old Alex Frecon, a copywriter with Solve in Minneapolis. 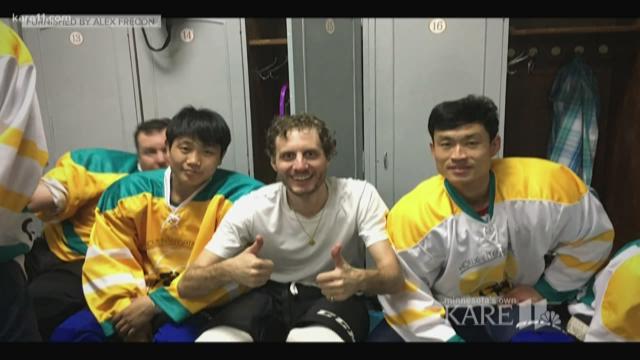 "Hey, who wants to come to North Korea to play hockey with me?," said 30-year-old Alex Frecon, a copywriter with Solve in Minneapolis.

Frecon thought about clicking; I mean, he loves hockey, even wrote a music video about playing. But, in North Korea?

So, Frecon researched if he'd be safe and signed up. Last March, he flew to Pyongyang, with his camera, fully expecting..

"People will be very suspicious of me being an American, they'll be hostile," said Frecon.

Only he was on a team, set up through a sports tourism organization - Howe International Friendship League - in Canada. They practiced six hours a day and played three games with the North Korean National Hockey Team.

Off the ice, Frecon went looking, documenting Pyongyang. As a tourist, he only saw what tourists are supposed to see. In Pyongyang, he saw a clean, modern city, with bright pink, blue, and green buildings, people with cell phones, riding in cars and the subway system.

But, when he left the city..

"Transportation - they had like oxen pulling carriages, some people had bikes," said Frecon.

Frecon was in North Korea a week. When he got back, he decided to call his parents and tell them exactly where he'd been, information he had withheld from them.

When the shock wore off, he told them he had met some kind and curious people, although he didn't see everything.

"I was put on a conveyer belt," said Frecon. "What I wasn't planning on was these kind of interactions that I had along the way, and they give you little bits and glimpses of what people are thinking."