It wasn't that long ago that former Gopher Tori Dixon was nearly a lock to become one of the youngest players to ever make a U.S. Olympic Volleyball team. 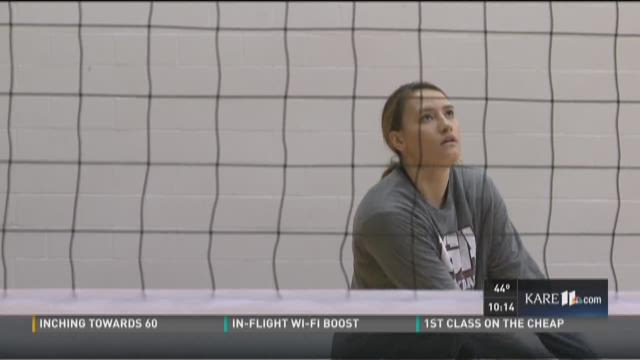 ST. PAUL, Minn - It wasn't that long ago that former Gopher Tori Dixon was nearly a lock to become one of the youngest players to ever make a U.S. Olympic Volleyball team.

“Before when I thought I had a chance,” says Dixon. “Is now a pretty big question mark.”.

That question mark comes from a torn ACL suffered in Japan, which has completely changed the course of her Olympic dreams.
“I landed badly and I kind of instantly knew something was wrong,” Dixon stated.

So instead of playing with the U.S. National Team, Tori spends her days on campus at the U of M rehabbing and working on her fundamentals. She won’t be cleared to start jumping and hitting until the middle of May, and the Olympic team will be selected in late June. Which means she'll have a little over a month to show she's 100 percent. A tall task even for a 6-foot-4 highly accomplished player like her.

“I am going to do everything I can to do it but at the end of the day it's out of my control,” she said.

But her perseverance comes from experience. Though the knee was her first injury, it wasn't her most serious surgery. When she was a star for the Gophers and she was diagnosed with a serious heart condition that put her career and her life in danger.

“They said if you want to be a volleyball player at a high level than we suggest you get this surgery,” Dixon recalls.

It was a big decision for a college student to have to make.

“People wanted me to think about it more before getting the surgery,” she says. “But in my head I was just like let’s get this over with let’s do it.”

And she wasted no time in making it.

“Me and my wife were in the car and on our way to the airport,” said her father, David Dixon. “We get the phone call that says, ‘Oh yeah I'm having open heart surgery tomorrow’,” he followed.

And she was back playing volleyball two weeks later. Tori's love and dedication to sports started early, when she would follow around her dad, former Viking David Dixon, at training camp.

“You could tell she enjoyed what I used to do and all sports at a really young age”, said David. “I remember when I was stretching and I looked to the side and she was stretching there with me.”

Now David is the one watching Tori in her quest for Rio.

“He's watched enough now that he kind of knows what’s going on and he can give me some hints and tips and I'll listen to some of them,” said Tori.

One thing they can agree on is a shared desire to be in Rio in August.

“Phenomenal, just to be going to the Olympics is a once in a lifetime kind of dream,” David stated.