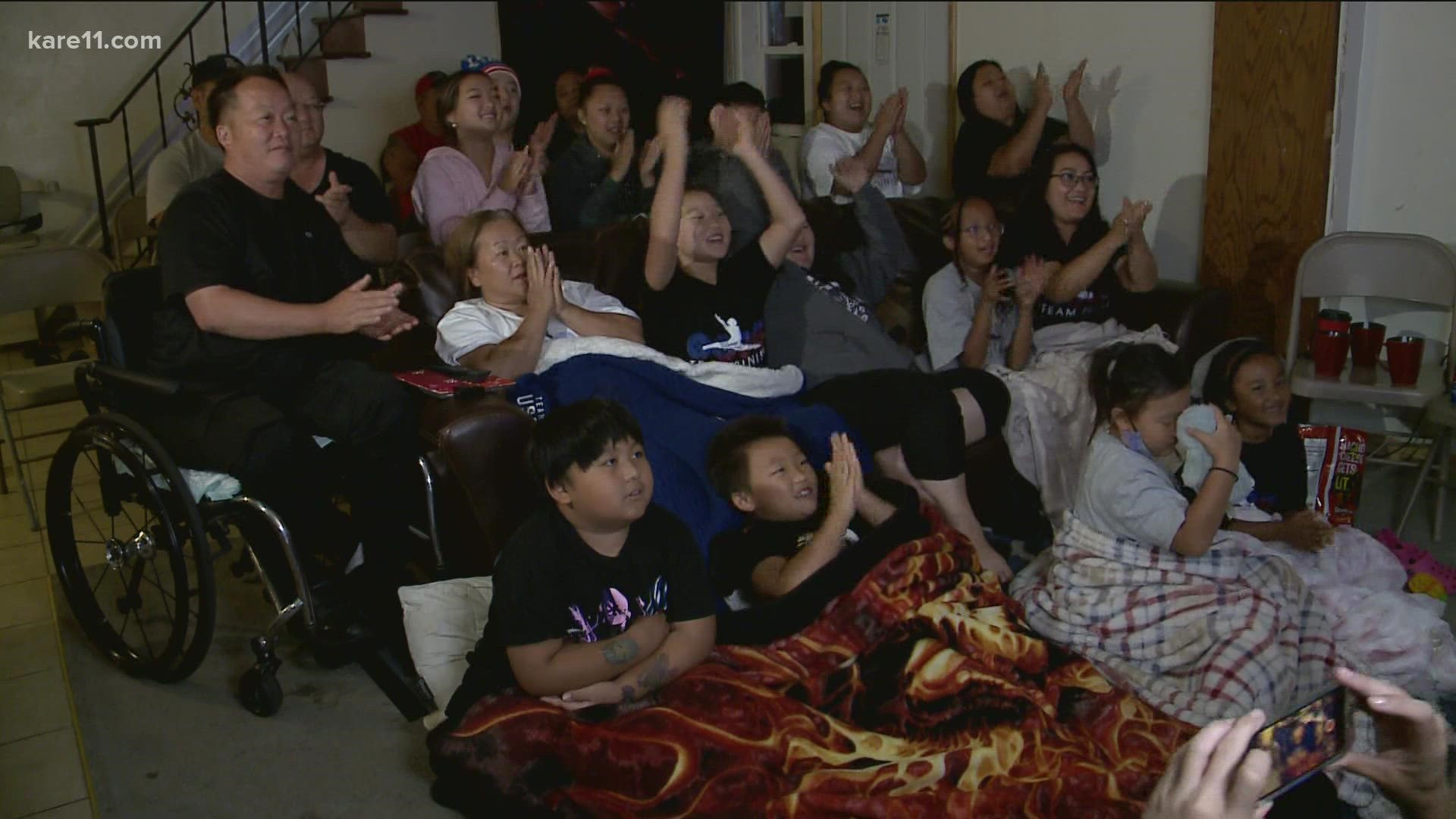 ST PAUL, Minn. — Gathered around the TV in a St. Paul home, Suni Lee's family was awake at 4 a.m. Tuesday, waiting for the hometown champion to compete in the individual balance beam final.

Lee already won three gymnastics medals at the Tokyo games, one gold in the all-around, one team silver and one bronze in the uneven bars.

As she took the floor alongside U.S. teammate Simone Biles, fans up bright and early across the metro were cheering for the 18-year-old gymnast.

It’s almost 4 am and some of @sunisalee_ family haven’t gone to sleep yet. They’re waiting for her final event, the beam. She’s competing with her teammate Simone Biles. #sunrisers pic.twitter.com/8V8oI4sfcR

Hopes were sky-high for Lee since the beam is one of her signature events. She was awarded the third-highest score in qualifications (14.200), behind two athletes from China.

.@sunisalee_ family cheering @Simone_Biles on her final beam routine. “Nice!” you could hear Suni’s dad saying throughout. Big smile after her dismount. So proud of you, Simone. ❤️ #Tokyo2020 pic.twitter.com/G6MoulovwL

Biles competed first with a strong showing, and looked happy and confident following her routine.

Suni struggled a little on beam and at one point came close to falling off. But she held on and was able to complete her routine with a solid score of 13.86, though it wasn't enough to place her in the top three.

.@sunisalee_ with an *incredible save on the beam. Her family amazed by her ability to stay on. And that is it for the Saint Paul, MN native in the #Tokyo2020. Now it’s just waiting for the rest of the group to finish to see where she ends up on the scoreboard. pic.twitter.com/tGv2AnSXMu

In the end, Simone Biles came away with a bronze medal.

Simone gets BRONZE in the beam finals! What a journey. Way to go! #Tokyo2020 pic.twitter.com/IEXF3df08h

While Suni Lee wasn't able to leave the competition with another piece of hardware, her family isn't any less proud of the colossal effort it took to carry her all the way to Tokyo from their home in St. Paul, Minnesota.

Suni says the challenge was staying focused on beam. She leaves with three medals, including gold in all-around. “I haven’t even had time to breathe and let it sink in.” She says this Olympics has been an amazing and crazy experience. She’s excited to go home with her fam. pic.twitter.com/2NWitbYgu1

Forever grateful for @sunisalee_ family for sharing their early mornings with me. You guys. Her parents were still working through this #TokyoOlympics and are this morning! 😮 Just as impressed with them as I am her. Thank you. 💕 #TokyoOlympics2020 #Hmong #HmongAmerican pic.twitter.com/nkVQVQcbkQ

From NBC Olympics: Simone Biles shined the spotlight on mental health at the Olympic Games. But she's not the only Team USA athlete speaking out about the pressure to perform. Anne Thompson looks at the mental toll athletes experience.