Most of Minnesota's confirmed cases have been clustered in the southeast, with a few cases in Meeker and Crow Wing County of central and north-central Minnesota. 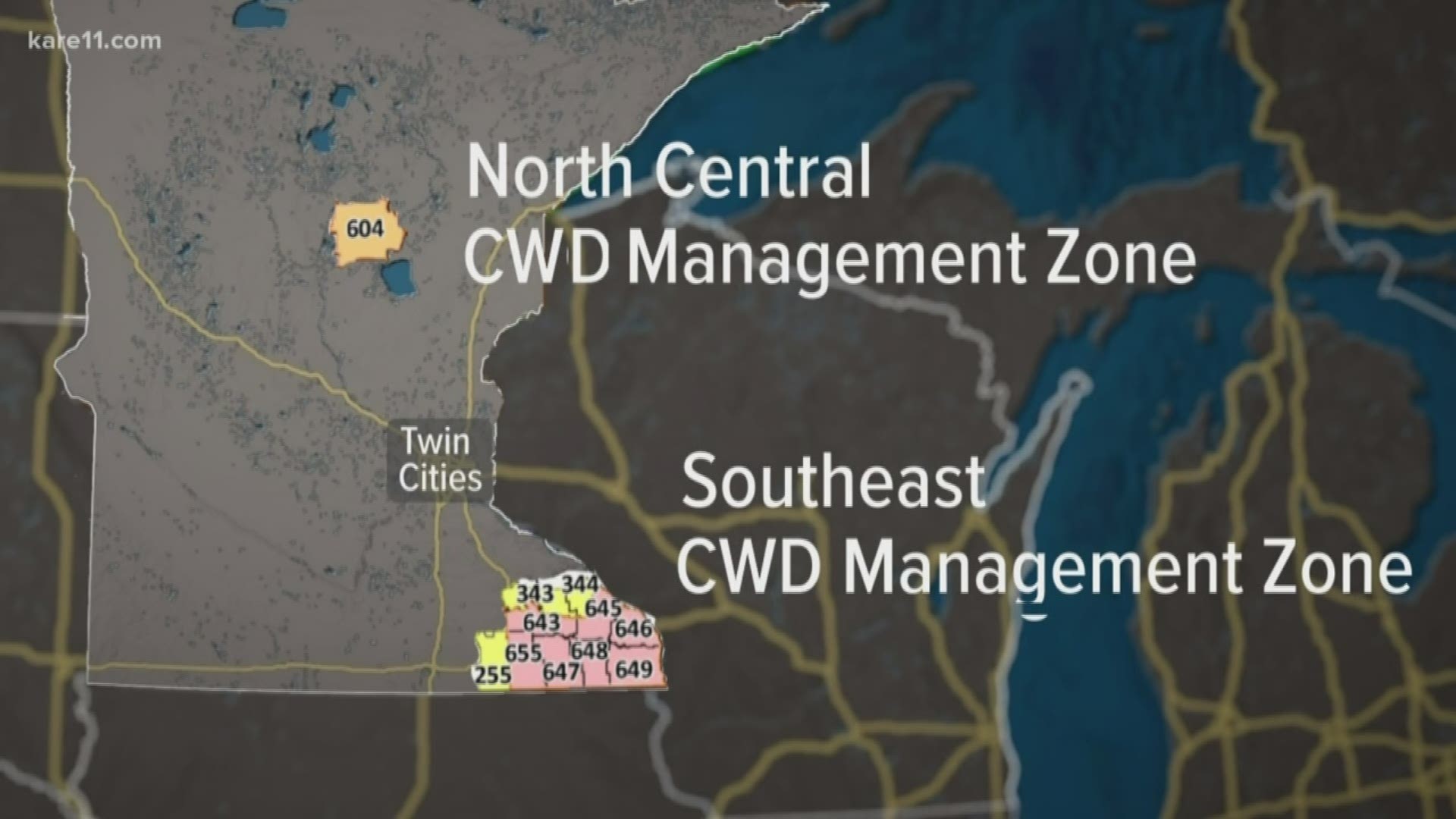 MINNEAPOLIS — After one hauler backed out, Minnesota wildlife managers said Monday they're close to rounding up enough trash bins to safely dispose of deer carcasses as they try to stop the spread of chronic wasting disease.

Waste Management recently decided not to accept carcasses that potentially could be contaminated with the fatal brain disease, which has been found in wild deer in parts of southeastern, central and north-central Minnesota. That sent the Department of Natural Resources scrambling to find replacement bins and haulers ahead of Saturday's firearms deer season opener.

The DNR's wildlife health program supervisor, Michelle Carstensen, told reporters on a conference call that some other haulers have now submitted bids, though she wasn't sure if they'll hit their goal of 26 dumpsters statewide for the opener.

"If we can get to 20, that'd be pretty good coverage," Carstensen said, expressing hope for 16 in southeastern Minnesota and four in north-central Minnesota. "So, we'll see if we can make that."

Speaking on the same call, Barb Keller, the agency's big game program leader, highlighted their three-pronged strategy for preventing the disease from becoming widespread, as it has in neighboring Wisconsin. Bag limits have been raised to reduce deer populations in areas where it's been found because it spreads from deer to deer; feeding bans have been imposed in those areas to discourage deer from bunching up; and carcasses can't be moved out of the hot zones until they test clean.

"The aim is to keep prevalence low where it does occur and to prevent the spread of the disease outside of that area" Keller said.

The DNR requires hunters in designated deer permit zones in southeastern, central and north-central Minnesota where diseased deer have been found to submit their deer for mandatory tissue sample testing, and it urges them to use the designated bins instead of dumping carcasses in ditches or the woods, where they could spread the disease to other deer. Less stringent rules apply in some nearby areas designated as control zones.

Chronic wasting disease is caused by a prion, an abnormally shaped protein that can remain infectious in the environment for years. Two deer shot in southeastern Minnesota have tested positive for the disease since the archery season opened Sept. 14, bringing the statewide total of wild deer testing positive to 54 since 2010, when the state recorded its first case in free-ranging deer.

Most of Minnesota's confirmed cases have been clustered in the southeast, with a few cases in Meeker and Crow Wing County of central and north-central Minnesota. While there's no evidence of the disease spreading to humans, the DNR urges people who hunt in the affected zones to wait until test results come back before eating their venison.

Results from opening weekend could take around eight business days, compared with the normal four.

The department expects nearly 500,000 hunters to participate in this year's deer seasons. Regional wildlife managers said they anticipate good opportunities in northwestern and central Minnesota. But they've taken a more conservative strategy toward issuing permits in northeastern and southwestern Minnesota so populations there can recover from the harsh winter of 2018-19.

The DNR is also advising hunters to scout or call ahead on ground conditions due to this year's wet weather. Recent heavy rains have made some forest roads and trails impassable.