Rachel Banham ready for the WNBA 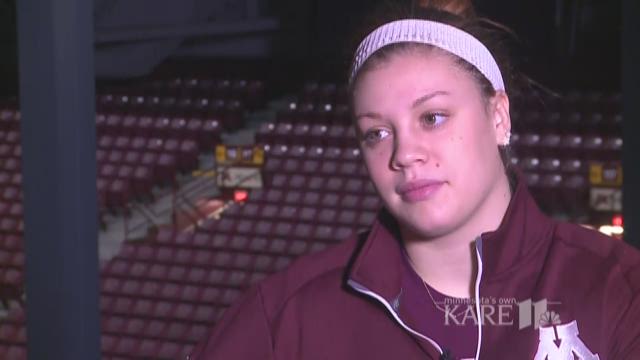 Kobe Bryant, of the Los Angeles Lakers, is playing his final career game Wednesday night. Rachel Banham, of the Minnesota Golden Gophers, is preparing to turn in her collegiate jersey for one with a team in the WNBA.

Banham, a senior guard from Lakeville, ended her collegiate career as an Associated Press All-American. A few of the many other career highlights include a sixth place finish on the NCAA’s all-time scoring list (3,093 points) and tying a NCAA record with 60 points against Northwestern on Feb. 7th.

"It's pretty cool," she told KARE 11 Sports Director Eric Perkins. "You shoot for those goals, but you never really know. It's been an honor."

Banham is thankful for her experiences, especially those after the knee injury suffered her junior year.

"My family, the trainers, teammates, friends -- I couldn't have done it without them," Banham said. "They said keep pushing, keep pushing, it's going to pay off. Well, it has."

Banham will be in Connecticut for the WNBA Draft, set for 6 p.m. Thursday on ESPN2. Several mock draft sites have the Connecticut Sun picking Banham at the number four slot.

"I'm really lucky, especially to be playing basketball at the time I am now," Banham said. "I think women now have so many more opportunities -- I'm going to try to make the best of it."

"It's going to be so fun, but weird, sitting there at the table and waiting to hear my name. I'm really excited and where ever I end up will be really cool."

Maybe with the Minnesota Lynx?

"I would love to stay home and play for the Lynx. I'm not getting my hopes up, but that would be a dream come true."