The state patrol incident report says the defensive back had a BAC of .10, and a loaded firearm was found in the car. 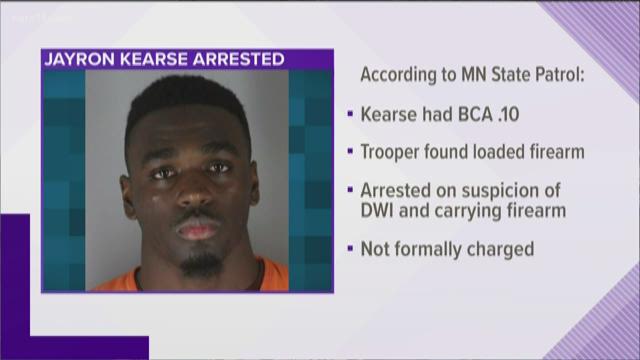 MINNEAPOLIS — According to the Minnesota State Patrol, a Minnesota Vikings player was arrested early Sunday morning driving on a closed portion of Interstate 94.

The state patrol incident report says that Kearse had a BAC of .10, and a loaded firearm was found in the car.

Kearse was arrested on suspicion of driving while impaired and carrying a firearm without a permit, according to the state patrol. He has not been formally charged. According to Hennepin County Jail records, Kearse was released from jail just before 2:30 p.m. Sunday after posting his $6,000 bond.

The Minnesota Vikings provided a statement on Sunday, saying, "We are aware of Jayron’s arrest and are gathering additional information at this time."

Kearse, a defensive back for the Vikings, was drafted as a rookie by Minnesota in 2016. He previously played for Clemson University.

He is the nephew of former defensive end Jevon Kearse.