Tommies pitcher returns to the field

Kierstin Anderson-Glass missed 2 seasons because of a concussion and is competing for St. Thomas in the NCAA softball super regional starting on Friday. 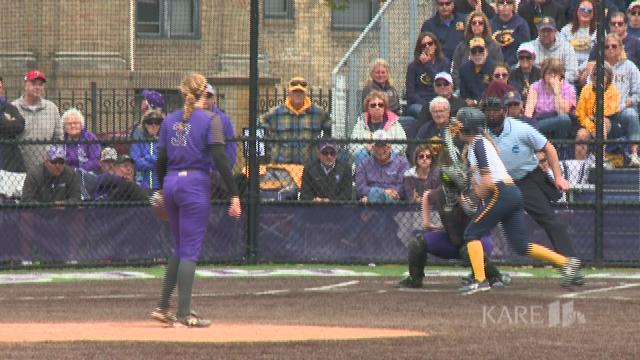 ST PAUL, Minn. — Kierstin Anderson-Glass has been a rock star on the field this season.

The junior pitcher is 24-3 for the Tommies heading into this weekend's NCAA Division III softball regional against UW-LaCrosse.

"She really stays in the moment and doesn't get too far ahead of herself," said Tommies head coach John Tschida.

"I'm focusing on just one pitch at a time not on what just happened or in the future. It's about keeping everything present in time and place," said Anderson-Glass.

There was a time when Kierstin didn't know if she'd ever play softball again.

She suffered a concussion back in 2016 at the College World Series that left her sidelined the past two years from playing the sport she loved.

"It's been a long road to recovery."

"I have had some ups and downs but working hard every day and just having the support of my teammates and knowing that they have my back was huge for me," Kierstin said.

"She always gives 100 percent for our team. You know she will give 100 percent even if she doesn't feel she has everything," said Tommies infielder Elise Barnes.