An upset at TCF Bank Stadium as the Gophers top Penn State 31 to 26! 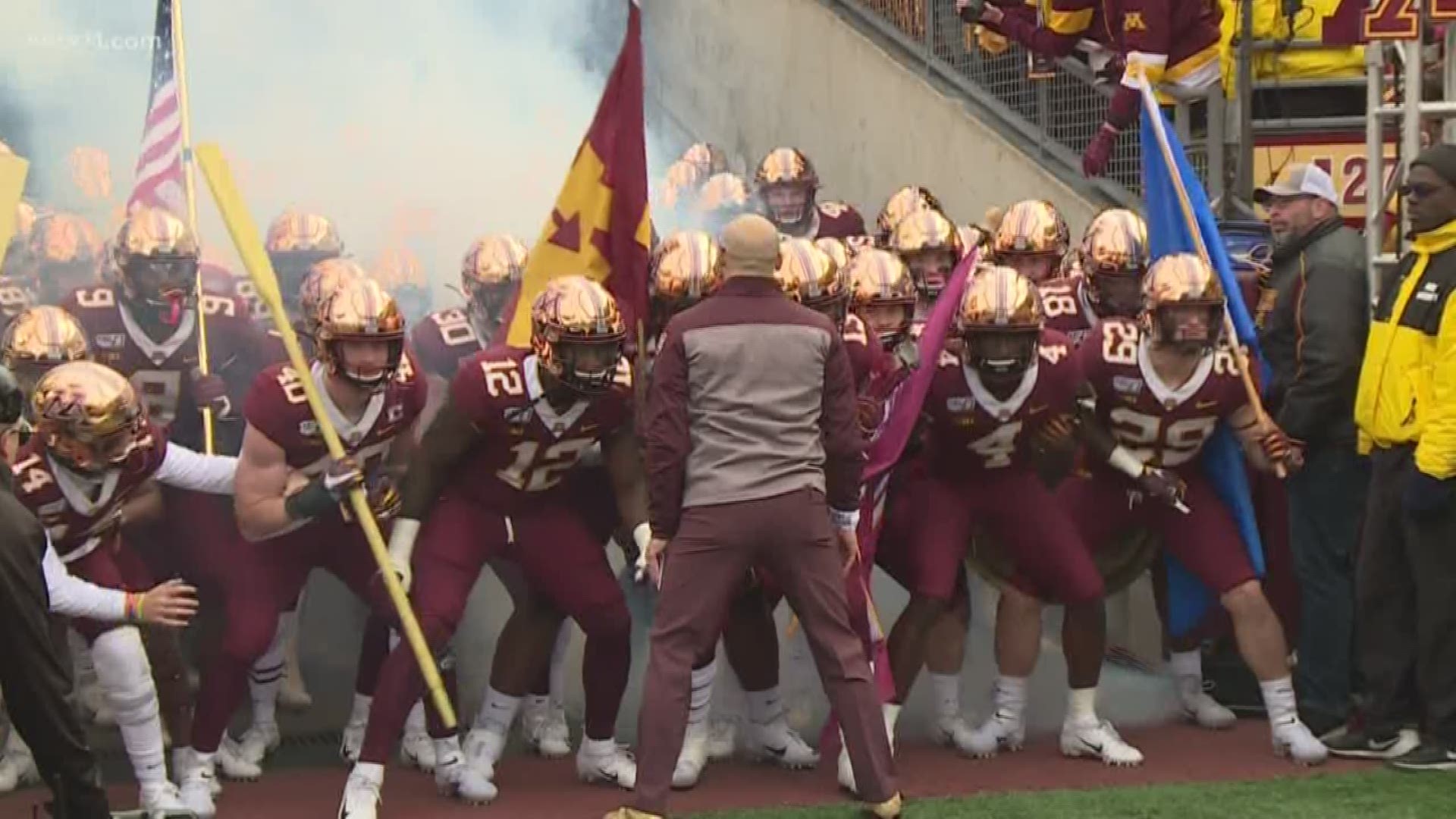 MINNEAPOLIS — The No. 13 Gophers staged an upset at TCF Bank Stadium, overcoming undefeated No. 5 Penn State, 31 to 26.

Before Saturday's game Governor Tim Walz went as far as to declare Friday Maroon and Gold Day in advance of the historic showdown.

Excitement on campus is palpable; so much so, the Gophers announced this weekend will be their first sellout since 2015. They even drafted a letter to try to persuade ESPN to hold its weekly "College GameDay" program outside TCF Bank Stadium to capture some of that excitement.

And were it not for the top two teams in the country facing off—No. 1 LSU at No. 2 Alabama⁠—ESPN viewers may have be seeing Dinkytown as a backdrop this weekend rather than Bryant-Denny Stadium down in Tuscaloosa, Alabama.

The absence of GameDay shouldn't diminish the importance of Saturday's matchup. The Gopher program seems to finally be back on track—or rowing the boat in the right direction—for the first time in years. Even past players are optimistic about where the team is headed.

"The reason I shook hands with (former Gophers football coach) Glen Mason was because of the hope to turn around a program and bring it back to its Big Ten Championship glory days," said former Gopher tight end Ben Utecht. "We were so close my senior year (2003) at 10-3 and we've waited a long time for this."

Utecht was a captain on that 2003 Minnesota Gophers team, which finished 5-3 in the Big Ten with their three losses coming to Iowa, Michigan State and eventual conference champion Michigan. All three teams were ranked when the Gophers faced them, and both Iowa and Michigan finished the year in the top 10.

"I came out of the (Tony) Dungy NFL era where culture wins," said Utecht, who won a Super Bowl under Dungy in 2007 with the Indianapolis Colts. "So, I bought into the language P.J. Fleck was using and the style of coaching, and I think we're starting to see the results."

While it seemed as if the football program had turned a corner—posting winning records in four consecutive seasons from 2002 to 2005—the Gophers were never able to build on that momentum. Minnesota posted sub-.500 record in eight of the next 13 seasons, but after beating Wisconsin last season in Madison—their first win at Camp Randall since 1994—and a 34-10 rout of Georgia Tech in the Quick Lane Bowl, that momentum seemed to have returned.

"If they can win any of these last few games, it would be huge I'd think," said Gopher Hall of Famer Jim Carter. "(Fleck) seems to have it going the way it needs to go. Winning takes care of a lot of things, so if they can continue to win, it's certainly going to be a lot better atmosphere than not."

The former Gophers fullback was the one of the leading rushers for the 1967 team—the last Gopher football team to win a conference title.

"We had some really, really great players," said Carter, who went on to play linebacker for the Green Bay Packers from 1970 to 1978. "I think we had like 11 or 12 guys either getting drafted or playing in the NFL, and that's pretty amazing for one team.

"But the big thing I remember about it, and I think most of our teammates are the same way, is the frustration we felt because back then, you either won the whole Big Ten and you went to the Rose Bowl or there was nothing else. ... Second place didn't do any good and we tied for first with Purdue and Indiana."

Indiana went on to represent the Big Ten in the Rose Bowl that year, despite the Gophers beating the Hoosiers 33-7.

Purdue and Indiana met in the final game of the regular season. With a chance to win the game, Carter said Purdue running back Perry Williams fumbled near the goal line to allow Indiana to win and represent the Big Ten in the Rose Bowl.

"We were playing Wisconsin that day and when we saw the score that day, it took the air out of all of us," Carter said. "It was really disappointing."

Carter and Williams became teammates in Green Bay, and Carter said he never let Williams live that moment down.

"I ended up giving him endless (grief) day after day, as much as I could for what that cost us," Carter joked.

But it still marks the Gophers' best finish in the Big Ten in more than 50 years.

There are no guarantees Minnesota will have an opportunity in the final week to clinch a spot in the Big Ten Championship, but at 6-0, the Gophers have a two-game lead in the Big Ten West—two games clear of Wisconsin and Iowa—and they control their own destiny, playing both teams in the final three weeks.

It has yet to be seen what the Gophers will do with this opportunity, but for many around campus and those who used to wear Maroon and Gold, it's promising just to see Minnesota back in this kind of position.

"As athletes and our competitive nature, we understand how significant every game is," Utecht said. "But you can rest assured these players definitely understand the significance of what these last games mean."

A spokesperson for the U says four fans were taken to the hospital following the post-game celebration. The U says all injuries were minor, like sprained ankles from jumping over the wall. 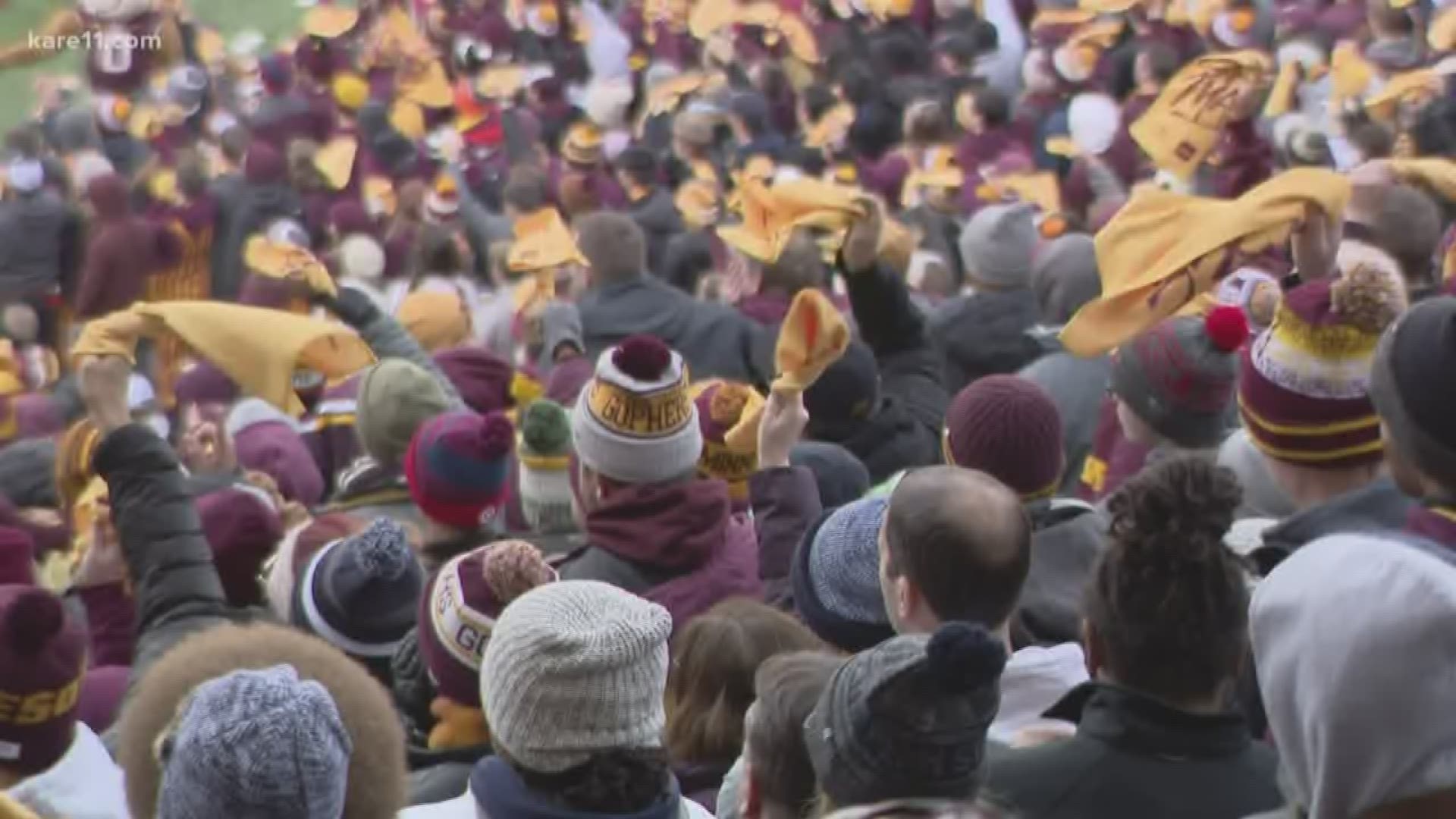