The 16-year-old from St. Paul, Minnesota, is at her first world championships after placing second behind only Simone Biles at U.S. nationals in August 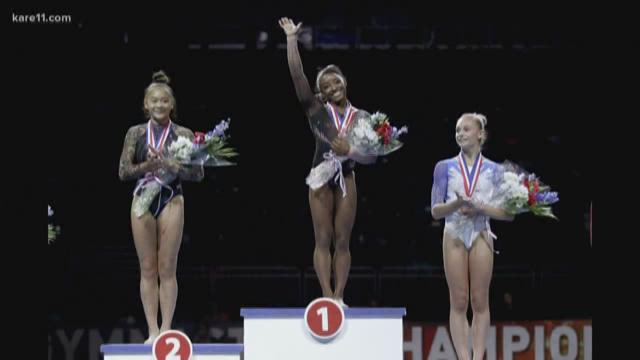 STUTTGART, Germany — As Sunisa Lee heard the national anthem play for her first world championship gold medal, her thoughts were back home in Minnesota.

Just two months have passed since Lee's father John injured his spine in a fall while helping to trim a tree. He's undergoing rehab after suffering partial paralysis.

"It was amazing. I almost started crying. It just feels so surreal and I can't even believe that I'm here and I'm a world champion now. That's so crazy for me," Lee said after being part of the winning U.S. women's all-around team. "(I was) just thinking about the whole routine and my dad. I'm just super proud of this team."

The 16-year-old from St. Paul, Minnesota, is at her first world championships after placing second behind only Simone Biles at U.S. nationals in August, days after her father was injured. She won national gold on the uneven bars, the only athlete other than Biles to win an individual event.

"I FaceTimed him last night and he's telling me that he's super excited and proud, and he even woke up super early this morning just to watch," she said Tuesday.

Grace McCallum, of Isanti, Minn., was also part of the gold-winning squad competing in the vault and the uneven bars.

Lee competed on the uneven bars, balance beam and floor. She showed resilience to recover from slipping off the beam — saying "the nerves got to me" after a long wait at the apparatus — to post the day's third-best score on the floor behind Biles and fellow American Jade Carey.

After a whirlwind two months, Lee is still adapting to being on the U.S. national team alongside athletes like Biles, now a 21-time world championship medalist.

"A bunch of them have been helping me a lot. Just because I'm the rookie, they've been giving me a lot of pep talks and stuff like that," she said. "I look up to Simone so much. She's super inspiring and such an amazing gymnast. It's definitely been a crazy ride and I'm super excited to compete in the all-around with her."