The Vikings hosted eight local Special Olympics teams from around the metro on Tuesday. 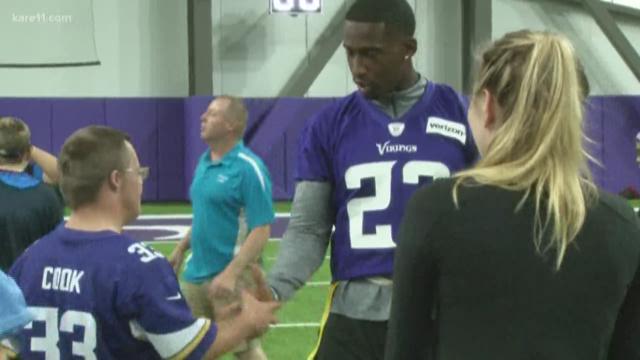 Gone were banging of helmets, coaches yelling, and whistles; replaced with high fives, laughter and so many smiles.

“It was incredible,” said Vikings Cornerback Mackensie Alexander. “The scenery, the people, the kids. It reminded of me when I was young.”

The Vikings hosted eight local Special Olympics teams from around the metro. Each team was paired with a Vikings player. A simple gesture that these kids won’t forget for a long time.

“The Vikings are heroes to all the people in Minnesota,” said Special Olympics Minnesota President and CEO Dave Dorn. “To have our athletes who are football players get to play with the best of the best, it’s just phenomenal."

“They see you, they watch you play, they want to be around you,” said Alexander. “They don’t forget things like that. I remember when I was a kid and going to camps and stuff and I still remember that today.”

Certainly everyone was having a good time. But Vikings General Manager Rick Spielman's daughter is a Special Olympics athlete, so for him, this was about more than just opening up the facility to Special Olympics Minnesota.

“It’s personal,” Spielman said, fighting back tears. “As fortunate as I am in this business to see a lot of great NFL athletes and a lot of great college athletes, I get probably more enjoyment out of watching these Special Olympics athletes get out here and compete.”

Tomorrow it will be back to competing here but for this hour today, scores don’t matter. Only smiles do.