The governor, a former football coach himself, says he understands the passion for sports. But he also says the data shows it's a risk to continue. 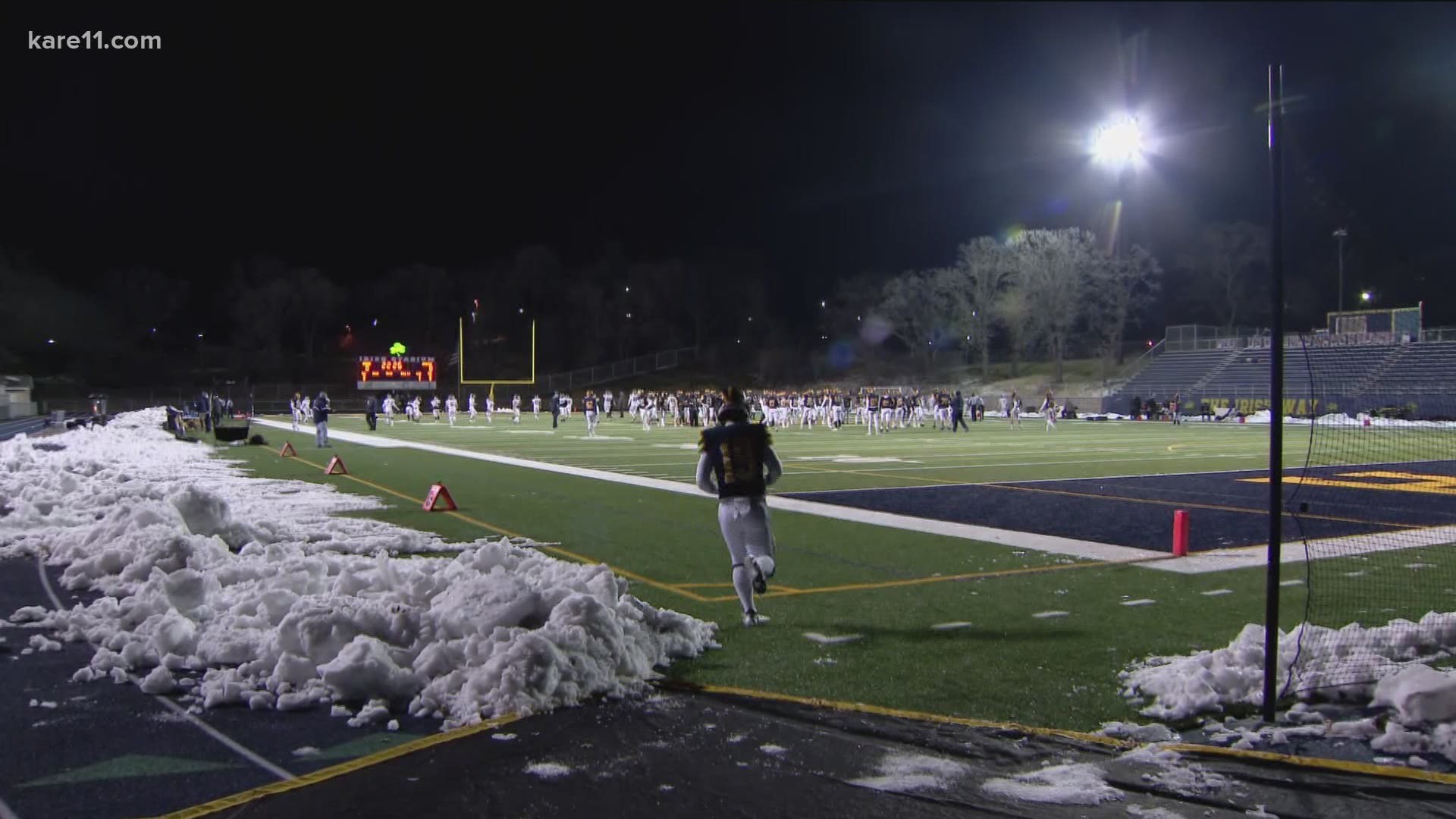 ROSEMOUNT, Minn. — As he approached the end of another work-from-home day on Tuesday afternoon, Chris Barnick came across a news item that he knew would devastate his teenage son.

Within 24 hours, Barnick learned, Gov. Tim Walz would likely issue a pause on youth sports as a part of broader COVID-19 restrictions. The decision, expected during a statewide announcement on Wednesday, would effectively bring high school football sectionals to a premature end – with fewer than two weeks left in the playoffs.

Barnick quickly dropped his work-related conference call and walked over to hug his son, Charlie, a senior captain on the Rosemount High School football team.

The Irish were scheduled to face Anoka in the sectional quarterfinals within a matter of hours.

“This might be your last game. It might be it,” Barnick told his son. “So, leave it all out on the field.”

Barnick begged the governor to let fall sports, like volleyball and football, complete their playoffs in the coming weeks.

“Governor, if you’re listening or watching, all we need is 10 or 11 more days for our boys to finish this football season,” Barnick said. “To see his face … Charlie’s a tough kid, he’s a linebacker. But I could tell he was holding back some tears.”

Gov. Walz, a former teacher and coach who helped lead Mankato West to a state football championship in 1999, said during a news conference on Tuesday that he sympathized deeply with the players and coaches. However, he also said he could not deny the growing number of COVID-19 outbreaks connected to sports, including 35 in football, according to data from the Minnesota Department of Health.

Although he did not reveal the exact details of his planned pause, Walz did not give any indication that he would carve out exceptions for fall playoff schedules. John Millea of the Minnesota State High School League, who was tweeting developments in real-time, interpreted the governor's comments to mean that Tuesday would likely be the "final day for football playoffs and volleyball regular season... at least for a while."

So if an immediate "pause" is announced tomorrow, today could be the final day for football playoffs and volleyball regular season ... at least for a while. https://t.co/81QLVXHBtK

The pause will also greatly impact many winter sports, scheduled to begin later this month.

“If we don’t get a handle on this, it’s not going to be a choice whether we keep it open. There’s going to be no coaches to coach, and we’re going to have more kids in the hospital. It is inevitable with this growth,” Walz said. “So, we’re going to issue some guidance around this… I’m not telling you anything that should surprise a whole lot of people, that we’ll have a pause in a lot of these activities, but we’re being thoughtful about where it’s hitting, what we can do, and how to best get us back to a place where we can do these activities.”

Indoor boys’ and girls’ winter sports, like hockey, basketball and wrestling, pose even greater health risks, according to experts. Patsy Stinchfield, a Children’s Minnesota nurse practitioner, pointed to a recent CDC report that described how COVID-19 spread to more than a dozen hockey players this summer, during a recreational game at an ice rink in Florida.

“It’s environments the virus likes: cold, indoor air, little bit of circulation, and lots of exhalation from skaters,” Stinchfield said. "You can see in that setting, how many people can get infected and how fast it spread."

Stinchfield acknowledged that youth sports can be incredibly positive for kids, particularly from a social and mental health standpoint. However, with cases and hospitalizations rising, she said the risks currently outweigh the benefits.

"Sports are good," Stinchfield said, "but, I think, right now, I do agree with the pause.”

Many parents had already prepared for the possibility of a youth sports stoppage.

Kate Singer’s son, for example, is playing football this fall for East Ridge High School, but she said he preemptively decided to skip wrestling this winter because of COVID-19 concerns.

“He has some high-risk issues, as far as health is concerned,” Singer said, “so that’s fine with me.”

But other parents are pushing back – especially those with kids participating in volleyball or football playoffs this month.

“My son Charlie and his teammates have worked very hard their entire lives to compete as seniors in the playoffs,” Chris Barnick said. “All we’re asking for is 10 or 11 more days.”