I-94 reopens after multi-vehicle crash closed highway near Monticello

A State Patrol spokesperson said nearly 30 vehicles were involved, about half were semi trucks. 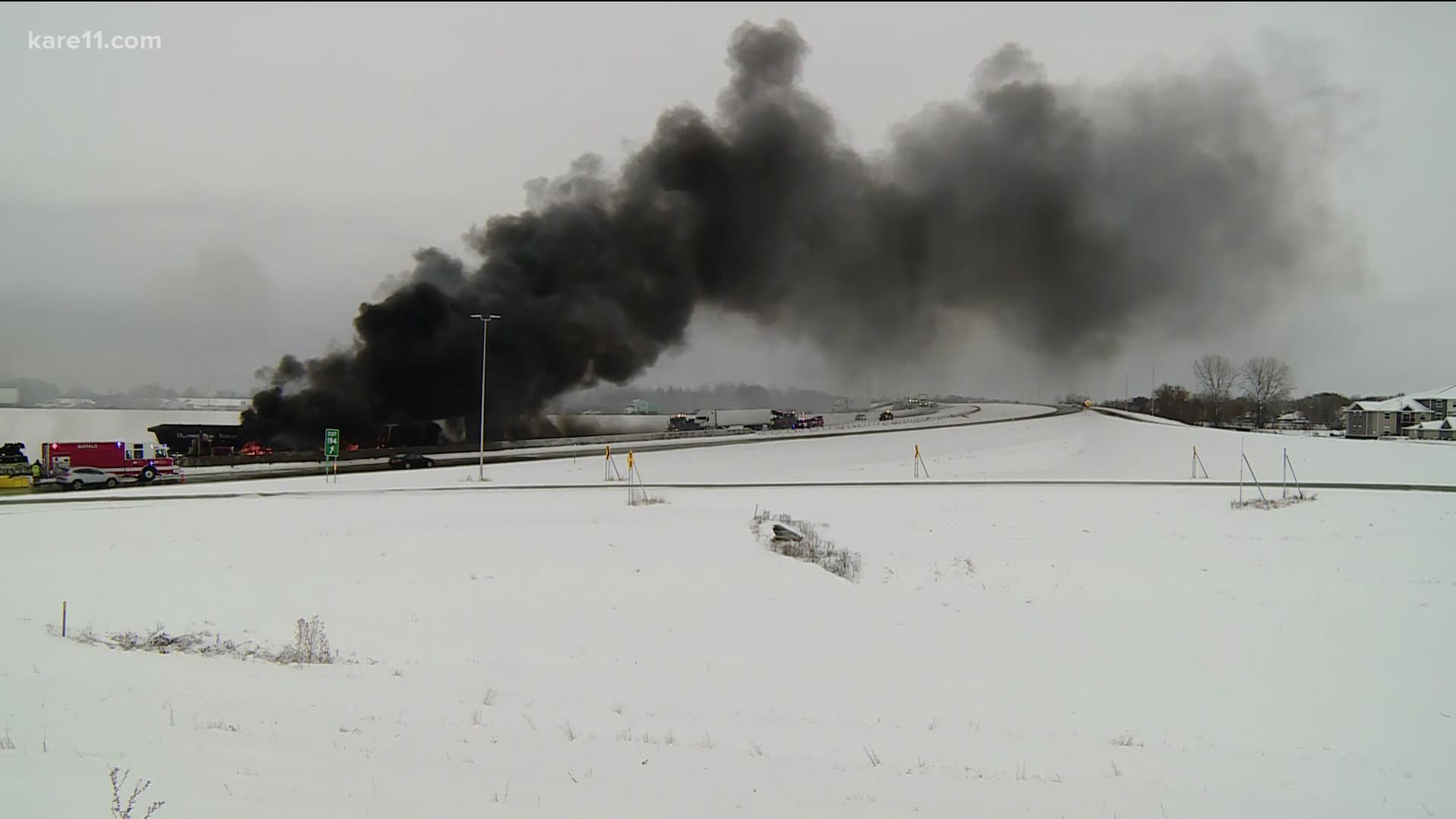 MONTICELLO, Minn. — Interstate 94 has now fully reopened in both directions in Monticello after 29 vehicles, half of them semis, crashed during a snow squall this morning, with several vehicles catching fire.

Grabow said that eastbound lanes of the interstate were able to open just before 1 p.m., but that westbound traffic had remained shut down at that time.

Thursday afternoon, crews worked to put out several vehicle fires and clean up the scene.

In a statement, the Department of Public Safety (DPS) said 29 vehicles were involved in the crash, and half of those were semi trucks. Grabow said one truck was carrying a load of tractor tires.

DPS said nine people were taken to the hospital with what appeared to be minor injuries.

Jim Rosenow was in the middle of it. He was steering his Chevy pickup down I-94 and says conditions went from fine to horrible in moments, with some of the heaviest snowfall he's ever seen.

"All my life driving in Minnesota snow, I’ve never seen anything as heavy as that," Rosenow recalled. "Put both feet on the brake and slammed into the median, another car slammed into me, and then a semi truck just creamed me. The whole back end of my pickup truck almost came through my back window. Some guy knocked on the back window…broke the back window and I got out and started helping other people." 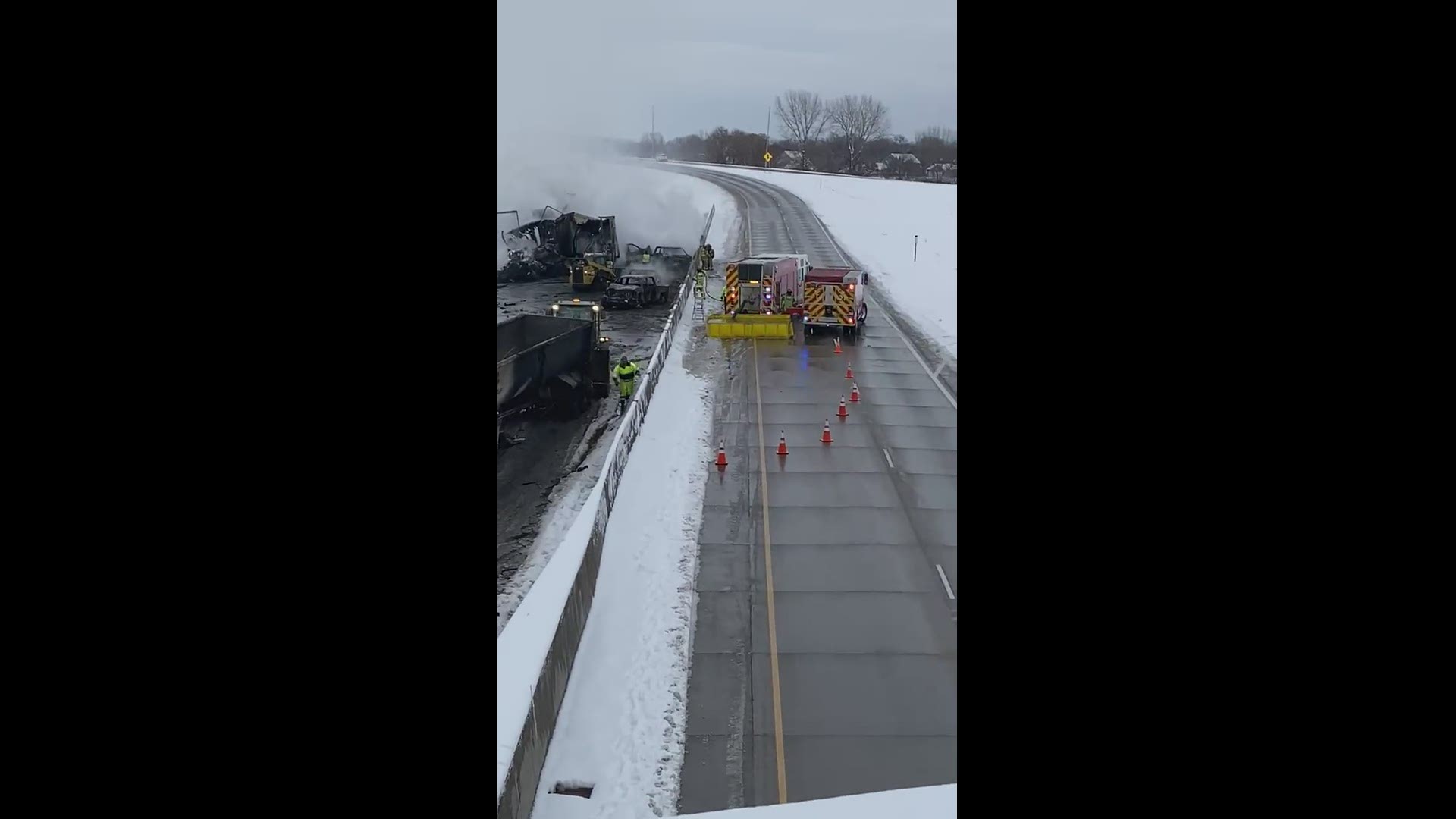 Rosenow's pickup was one of the vehicles that burned. He told KARE 11's Chris Hrapsky that he saw a woman escape her car just 30 seconds before it went up in flames. Rosenow is thankful to be OK, and that everyone else seems to be as well.

The State Patrol's Grabow tweeted that the road could remained closed for "several hours" and urged motorists to seek alternate routes.

I94 Monticello - both EB & WB directions remain closed while the fire department continues to put out the fires. One load was tractor tires. Preliminary info indicates approximately 30 vehicles involved (half were semis) working to get road open https://t.co/UtVIO32TcR pic.twitter.com/pvRYB7xdbU

Earlier in the morning, MnDOT traffic cameras showed flames and smoke billowing into the air from a burning semi. Grabow says the driver of that truck is OK. Other vehicles appeared to be damaged and pulled to the side of the interstate.

I94 EB is now closed at Hwy25 (Monticello) making both directions EB & WB closed while Troopers, responders & tow trucks tend to the several vehicles on the freeway https://t.co/UtVIO32TcR pic.twitter.com/JNMPjkjOLp

The area was under a snow squall warning at the time of the crash, meaning motorists may have encountered white-out conditions. 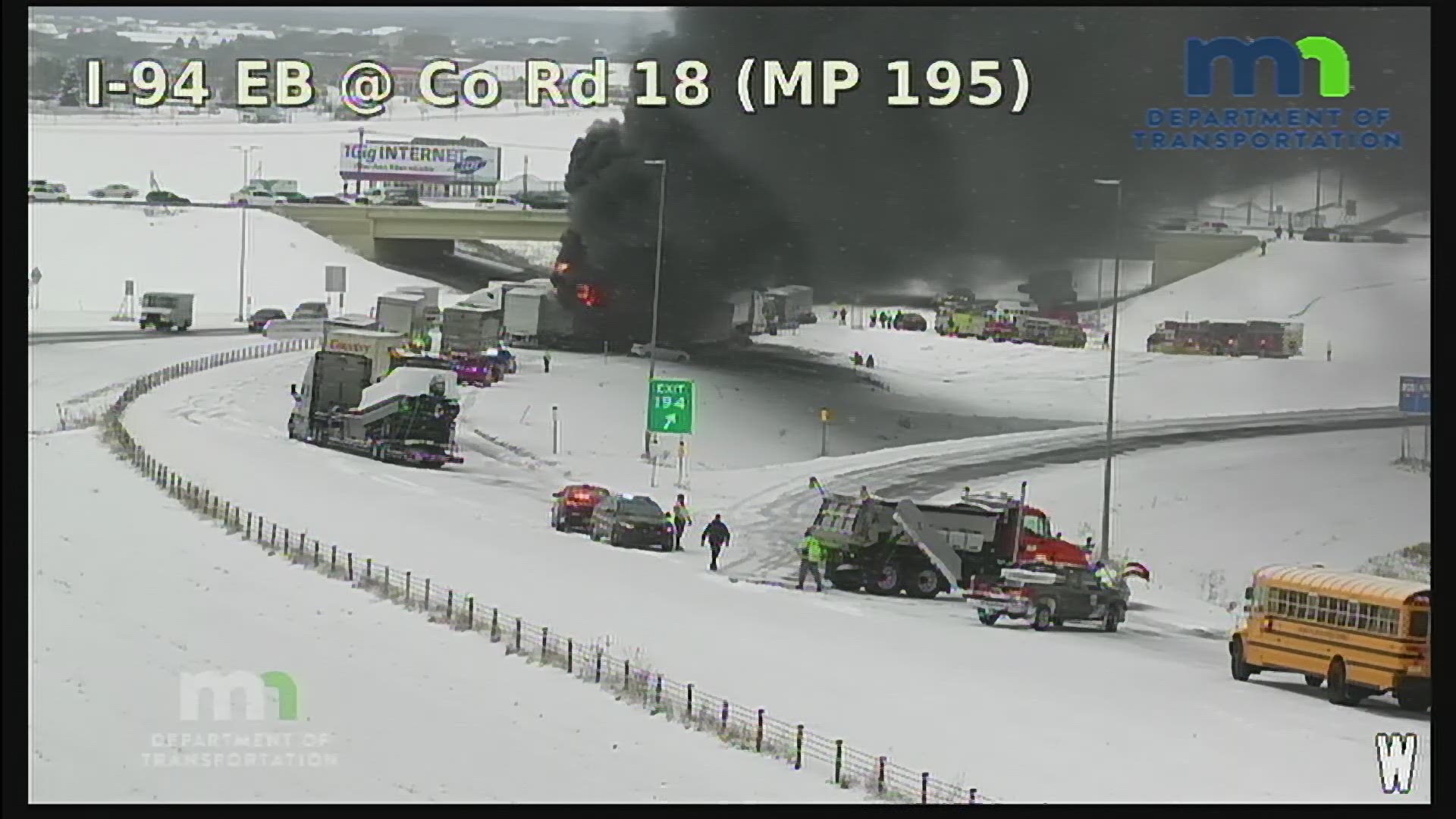