In the past week, there have been at least three reported rescues of animals in the metro area. 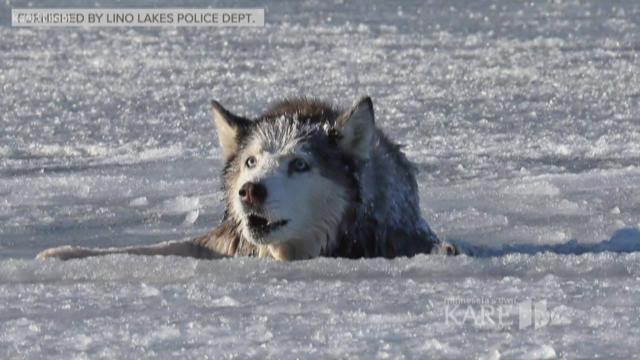 MINNEAPOLIS -- Law enforcement and fire departments in Minnesota are warning people to say away from thin ice on lakes, ponds and rivers.

In the past week, there have been at least three reported rescues of animals in the metro area.

Over the weekend, a dog was rescued by the Lino Lakes Police Department on Otter Lake after a dog broke through the ice. According to a Facebook post by the department, the dog's owner also fell through after trying to rescue their pet. Both are doing ok.

Last week, the Eden Prairie Police Department posted on its Facebook page that law enforcement and firefighters helped rescue a dog from Staring Lake. The dog is doing ok.

Also last week, Bloomington firefighters say they rescued a dog who fell through an icy pond near Penn Aveue South. The Bloomington Fire Department says it got a 911 call from someone who was worried that the dog's owner would try to go into the pond to save their pet.

"We don't want pet owners going out onto the ice trying to rescue their dogs or cats. It's an instinct that we might have, but it only causes more problems," said Robby Smith, a Bloomington firefighter.

The Minnesota DNR makes it easy for you: