Want to travel like Sven? Here are his dos and don'ts for an African self-drive safari. 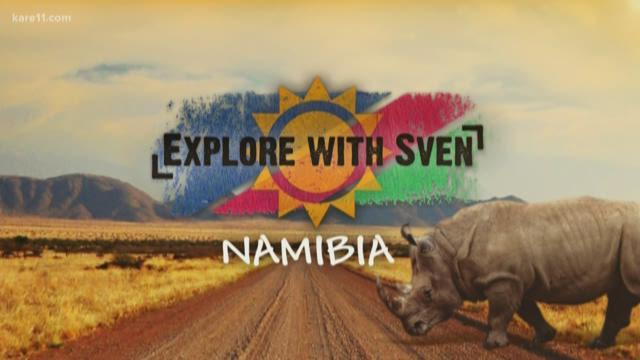 I’ve always wanted to be my own tour guide to experience a world full of magical beasts from my childhood dreams. A self-drive safari in the second least-densely populated country in the world was the perfect way to fulfill this lifelong desire. This was my once-in-a-lifetime trip to Namibia, and I invited my close friends Robert and Andreas to join me.

The self-drive safari is common practice among locals and neighboring South Africans but is entirely different from what most Americans picture as a typical safari. Namibia does not have an extensive network of paved roads, so renting a fully equipped 4x4 vehicle that can traverse the primarily dirt and gravel roads (or even sand if you’re up for a real adventure) is a must.

There are a few options for rentals. I personally used Britz, which is a large South African based

company. The vehicles come equipped with everything you need, including sleeping bags, pillows, cookware, a propane gas cooktop, a water tank (to refill as needed) and tents that pop up on the rooftop of your vehicle. They even have a fridge/freezer chest in the back of the vehicle that runs off of its own battery separate from the car’s battery and will keep things cold for a surprisingly long time. In all, the double-cab rental cost us around $1,200 USD, including insurance.

Everyone’s preferences are different, but we tried to break up our 10 days between camping and staying at a nice lodge every two or three nights for comfort. Most campsites are clean and well-equipped, have communal bathrooms, showers and grill pits, and some even have electrical charging outlets. The campsites generally run $10-$20 USD per night, and some even have food for purchase if you are running low.

Because Namibia is sparsely populated and has a challenging infrastructure, the driving distances between locations can take three to five hours. Unless you have a large budget and are willing to take bush planes from place to place (which can cost thousands of dollars for a two-week trip), driving is the way to go and the scenery of the country does not disappoint.

We picked up our vehicle (which comes with a full training session) in Windhoek, the capital of Namibia and the city with the most accessible airport for arrival. If, like me, you’re not auto-savvy, it’s worth refreshing yourself on some automotive basics such as fluid checks, and most importantly, how to change and repair a tire. You will definitely change or repair one or two tires in a two-week trip around Namibia since the roads are rough and most of your travels will be rather remote. In 10 days, we had to repair two tires. It’s all part of the adventure, but also keep in mind to pad your travel time a couple of hours each day for these possible delays.

If you need to buy anything other than food, do this in Windhoek. You will not find a mall or major store in Namibia other than in Windhoek or Swakopmund (many hours away on the west coast).

We made our way to the Little Sossus campsite on day one, which is about four to five hours from Windhoek. This was our jumping-off point for our first full day in Namibia, when we would

see the world’s tallest dunes, Sossusvlei, near Sesriem. Luckily, after a long day of driving, we made it to the campsite just before sunset. Our first African sunset in Namibia was incredible!

After that, we had about 20 minutes of daylight left to set up camp and make a quick dinner. We had a good night’s rest after our exhausting day and were up by about 4 a.m. to drive an additional 45 minutes to the Sand Dunes of Sossusvlei and Deadvlei. These gigantic red-orange dunes, each with its own name, look most brilliant at sunrise or sunset when they cast shadows and the light colors them differently. The dunes aren’t without other natural elements; we saw an ostrich running, and we noticed pockets of petrified trees where water used to run.  Conditions are so dry now that the trees died, but they remain preserved among the red sand landscape.

We then drove north to the cooler, foggy Atlantic coast of Namibia and its second largest city, Swakopmund, where we met up with a native Minnesotan who works with Save the Rhino Trust. He arranged for us to visit Mondesa Youth Opportunities, a school for gifted children who cannot afford educational opportunities similar to what most American students are accustomed to in public schools. The trust partners with many area schools to help kids learn the value of protecting rhinos across Namibia while emphasizing the rhinos’ importance to local culture.

We spent one night in Swakopmund right on the coast at the Stiltz Lodge. It was damp and cold the following day when we set off north along the eerily named ‘Skeleton Coast.’ It can be a pretty treacherous journey because the roads are made of salt mixed with sand, which resembles concrete but is extremely slippery when wet. The coast earned its name from the whaling days when skeletons of whales routinely washed up on shore. Also along the coast is the Cape Cross seal colony, which is well worth the visit but smells horrific with thousands of seals and their droppings.

Our destination that evening was Wereldsend base camp in the western Kuenene region, where researchers are studying African wildlife and the environment. We camped there with special permission, which can be obtained by writing the camp for access. The purpose of our stay in Wereldsend was to see the elusive desert black rhino. The area is home to one of the last truly wild black rhino herds left in the world. Most other rhinos are within national parks or game reserves—sadly needed for their protection—but local communities and Save the Rhino Trust have made it possible for this wild herd to continue to exist and rebound from an extremely low number in the 1980s. Anyone can hire Save the Rhino Trust trackers or stay at Desert Rhino Camp to get into the remote areas where these rhinos can be found. That day, we saw giraffes, zebras and, of course, rhinos.

Later that day, we made our way to Grootberg Lodge for a couple nights of rest and relaxation on an actual bed and enjoyed the lodge’s restaurant and pool overlooking the Grootberg Valley. Throughout our stay at the lodge, we tracked black rhino and desert elephants and saw plenty of other animals with the help of a guide, which can be employed for about $50 USD. I highly recommend using a guide—it makes locating and spotting wildlife significantly easier than it is on your own.

After checking out of the lodge, we headed to Etosha National Park, probably the most visited place in Namibia. It’s an entirely different experience seeing wildlife in a national park versus tracking them in the wild in unprotected lands. At the national park, you’re guaranteed to spot elephants, zebras, various antelopes and wildebeests. But even in Etosha National Park, you can

find a way to get off the beaten path. Our first campsite was at the Halali camp in east-central Etosha, which was probably our least favorite camp on the trip since it had so many vehicles and tents. The upside was that camping here gave us the opportunity to go to the Halali watering hole, which provided an incredible display of wildlife at night, including rhinos, hyenas and even a rare leopard (very uncommon to spot in the wild—and at night, no less). More exciting, we witnessed a mama rhino with her calf chasing off a leopard (who may have been just trying to get water, not the calf ).

The next day, we drove various trails to multiple watering holes, all offering their own glimpse of different wildlife. The highlight of Etosha had to be finding lions. They’re probably the most difficult to spot in action because they hunt at night, and lounge in the shade by day. We were lucky enough one morning to see a pride of lions walk in front of our vehicle as they moved from the previous night’s hunting grounds to their lounging grounds for the day.

We then drove clear across Etosha, a trip most find challenging to make due to the distance and difficulty, to the Dolomite Lodge in the far west part of the park, an area which had previously been restricted to visitors. We experienced more unbelievable sunsets and another opportunity to relax at a pool in the afternoon and enjoy sleeping in a real bed.

After a few days at the Dolomite Lodge, we stayed at the Etosha Safari Camp, just south of the park gates. It was an excellent spot for our last night in Namibia, as it featured local musicians and green grass – something we hadn’t seen much of throughout the journey. This was a great spot to be situated to drive only three hours (which you’ll find in Namibia is a short drive) back to Windhoek. It seems like a whirlwind, but we completed our circle of nearly 1,500 miles in 10 days.

Before you head to Namibia for your own self-drive safari, check out Sven’s tips to ensure a stress-free adventure.

• The best time to go is in August or September because it’s the end of the dry season in Nambia, so the animals are most likely to congregate at the few sources of water that exist, making wildlife spotting easier.

• Get a cigarette lighter charger with multiple outlets to charge your devices while you’re driving for hours, as you may not have electric to hook into at some of the campsites.

• Be sure to pack as light as possible. You will be dusty and dirty the majority of your time in Namibia, so there’s no need for constant changes of clothing since you won’t be able to keep up with the environment.

• At the end of the dry season (end of the Southern Hemisphere winter), the weather gets

hot by day (80 to 95 degrees Fahrenheit), but remarkably cool at night (into the 40s and 50s). So, having some hoodies and sweats isn’t a bad idea for the late evenings and early mornings.

• Refresh your automotive repair skills and try changing or repairing a tire at home. You can even consider bringing a tire repair kit. Your vehicle will most likely have two spare tires and a jack.

• We rented a Nissan double cab 4x4, which was fully equipped for camping. There were three of us, and this was just enough room considering our bags, food and camping supplies. While you might think you can seat three to five people in that large of a vehicle, remember all the gear you’ll be traveling with. I recommend a double cab for even two people, and certainly something bigger for anything more than three people.

• Plan out meals and grocery shopping. It will save you from wasting food and overbuying.

Keep in mind that you will pass locations at least daily where food can be purchased, so there’s no need to stock too much food, especially perishables.