Our crew was shooting a story on a flooded street, inundated with murky brown water swept in by Florence. A couple began to walk through the water and started to struggle. 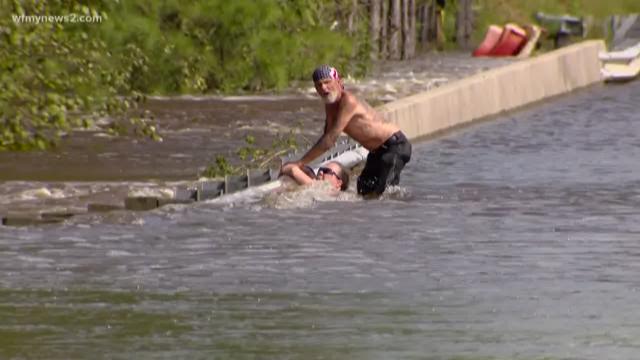 CUMBERLAND COUNTY, N.C. (WFMY) - Monday afternoon, our crews were reporting from an area in Cumberland County about the high water and flooding. Behind them was a flooded street, inundated with murky brown water swept in by Florence. A couple began to walk through the water and started to struggle.

“Help!” our crews heard them shout, and we called 911. We were on the phone with them for 12 tense minutes.

Three men help a woman to safety after her and her husband were pulled under floodwaters following Hurricane Florence on Sept. 17, 2018.

Three men started into the water after them as our reported stayed on the phone with an emergency dispatcher.

“They got her,” you can hear reporter Adrienne Broaddus say on the phone. “The man is struggling to walk and two men are carrying the woman over their shoulders.”

I’m on the phone with 911. A woman and man are trapped in the water on McCormick bridge. https://t.co/fCMIVGuxca

The good Samaritans made it back to dry land with the couple who told us they had been trying to get home. We brought them some towels we had in the car.

“I was trying to get back to my house and all the roads is bad,” Mike Morris, the man who was rescued, told us. “I didn’t think it was bad enough that we wouldn’t be able to cross.”

A woman is pulled from the floodwaters in Cumberland County after she tried to return to her home by crossing a flooded street.

Morris said they hit a hole and fell under the brown water.

“If we hadn’t have hit the hole, we would’ve been able to hold on,” he said. “But we hit a hole that big around and we both went under.”

Morris' partner, Kathy Griffin, told us her own brother was one of the people who helped them to safety.

The original three men who went in stopped to talk to our crews before leaving the scene.

"She was screaming for help and we didn't know if they [emergency responders] were going to get there in time," Mike Wolfe, a paramedic by trade, said. "At first we were thinking, 'Well, let's see how deep it is and if we can help them, because we don't want to become, you know, casualties.'"

"And then once we were under the bridge [and could get to them] it was a no brainer," Michael Cornelius chimed in. "We were in the right place at the right time."

Corneilus had his kids in the car waiting for him as he pulled Griffin to safety on his back.

Morris walked over and shook their hands as a way of saying thanks as Griffin hugged them.

He had a message for everyone watching at home:

“I thank everybody and don’t cross no water!” he said emphatically. “Do not even attempt it, I thought it was alright…but I hit a washout and we went completely under.”

Michael Cornelius hugs the woman he pulled from floodwaters and carried to safety.