Recent weather, from snow to the polar vortex, created the perfect combination for ice dams to form. 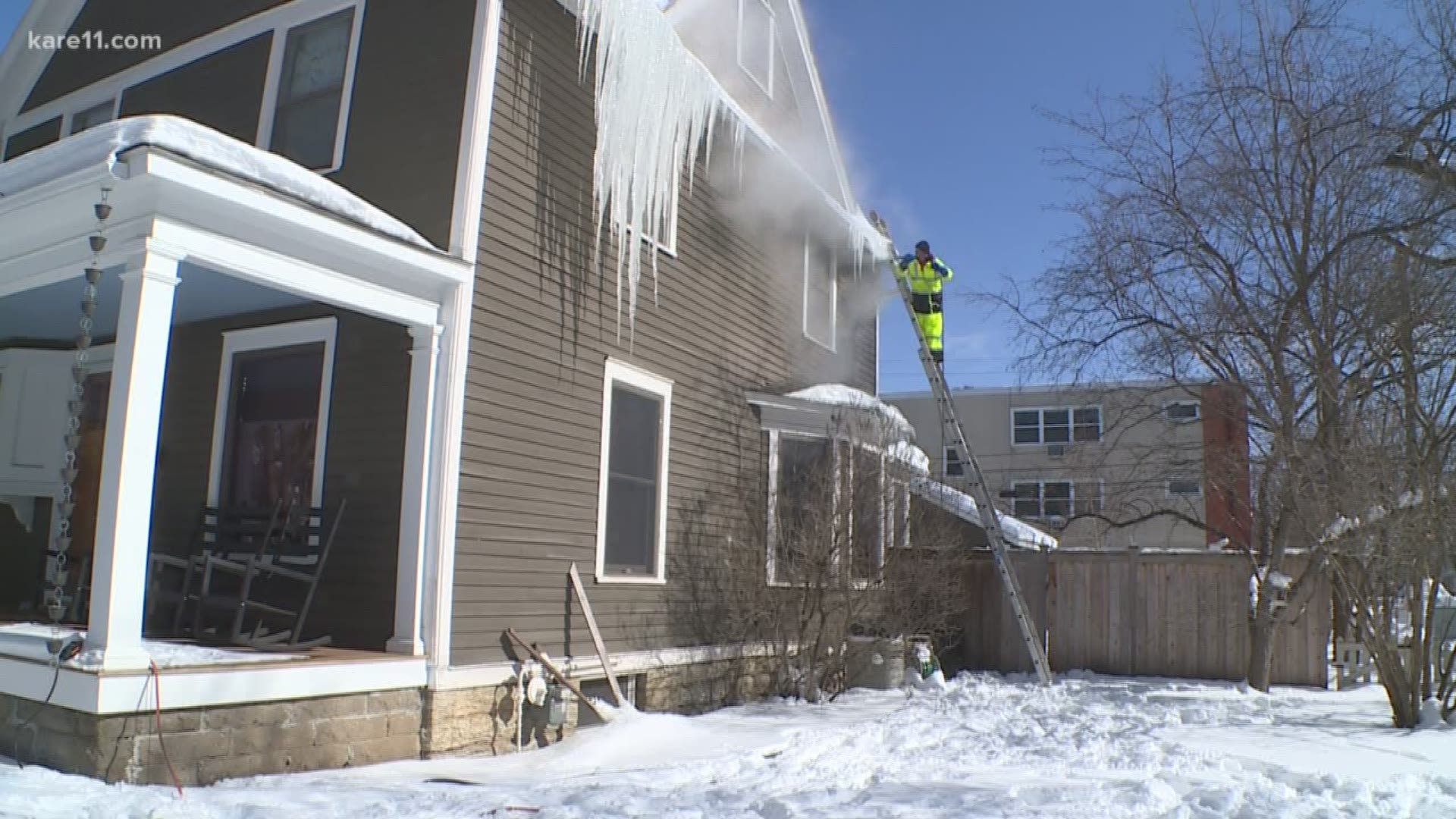 MINNEAPOLIS — Ice dams can be seen on roofs all across the Twin Cities and with more snow on the way, ice dam removal companies expect to stay busy.

"It's been five years. 2014 was the last time it was here in Minnesota. So that's the other thing, it's not a reoccurring annual thing because you gotta get a lot of snow, really cold temps, then it's going to happen," said Mike Hilborn, owner of RTD Ice Dam Removal in St. Paul.

Hilborn said it started a week ago, with more calls coming in by the end of the week. Sunday was a slow day but then came Monday and Hilborn said, "Boom! Phones just blew up this morning."

A crew worked Monday morning on Matt Vogt's home in Uptown. Ice dams could be seen on both the north and south sides of the house. Vogt said it's the worst he's seen it since moving in six years ago.

"We didn't want to have any chance of water damage," Vogt said.

Recent weather, from snow to the polar vortex, created the perfect combination for ice dams to form.

"My neighbors and I, we were actually talking last night about it. How just every house up and down the neighborhood has it," Vogt said.

When heat from inside creeps through the roof, it melts the snow on top. When it gets to the edge of the roof, where there isn't heat, it freezes. The melted snow continues to build up until it pools up behind the ice.

"That's why they call it an ice dam and then that starts leaking into people's homes," Hilborn said.

RTD Ice Dam Removal crews use steam machines to melt the ice off.

Hilborn said there are several reasons why someone's house could be more prone to ice dams. He sees older homes—especially in south Minneapolis, Edina and St. Paul—most impacted by them.

"Most cases it's insulation, ventilation and then it's sealing up the pipes that kind of go through the attic and exit the house. If those aren't sealed up, there's a lot of chance for heat to get in there," Hilborn explained. "Then insulation, you want that attic to be the same temperature as it is outside."

Roof rakes can also help. Hilborn recommends clearing the bottom three feet of snow from the roof but said, "The problem is it happens so fast. Within 12 hours it's too late if you didn't get right on it."

"I've never seen that stuff work and maybe the ones that work aren't the ones that are calling me. The ones that we're going out to... we're actually taking the salt sock off the roof because the ice has gone over the top of it," Hilborn said.

WIth more snow on the way, Hilborn expects they'll stay busy through the end of February.

If you have a house that gets a lot of ice dams, Xcel Energy offers a number of home energy efficiency programs—including home energy audits—that can help you figure out how to fix the problem.