Ice jam leads to flooding on Mississippi in Anoka

Trails in several city parks are closed for safety, and the public is being asked to stay away. 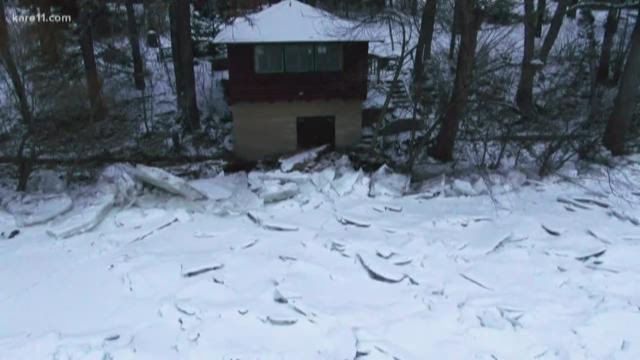 ANOKA, Minn. — The National Weather Service says an ice dam in Coon Rapids has caused flooding on the Mississippi River in Anoka, Minnesota.

The City of Anoka posted on its official Twitter account on Monday morning, saying that the river is overflowing its banks and causing flooding with trails in parks along the Mississippi and Rum Rivers.

"We're preparing for the absolute worst because ice jams are so unpredicatable," said Anoka Police Chief Eric Peterson. "This morning, the river was free flowing here in Anoka. Now it's packed up with ice."

According to Peterson, the river surged 8 feet in just 24 hours. Trails in several city parks are closed in the interest of safety, and the public is being asked to stay away.

The National Weather Service in Chanhassen issued a flood warning for the Mississippi River at Highway 169 in Champlin, affecting both Anoka and Hennepin Counties. The NWS believes ice jamming on the river has led to higher river levels.

In Coon Rapids, many homeowners along the river are more concerned about damage from the ice jam itself than the flooding threat.

Mark Brakke discovered a large tree and frozen chunks of earth pushed into the door of his boathouse by an ice chunk that measures more than 10 feet long.

"You'd have a hard time doing this with a big dozer," said Mark Brakke. "I've been here since 1975 and I've never seen an ice jam do something like this."

Chief Peterson says the threat from the ice is expected to slowly drop. The river reached one foot above flood stage on Monday. He says it won't endanger any homes unless it climbs another foot but he doesn't expect that to happen.

"I spoke to the National Weather Service and it has, at least for the moment, topped off," Peterson said. "But we'll be watching it closely all night long."

RELATED: Minnesota farmers ready to turn the page to 2020

"A gradual release of water is expected unless the ice jam breaks, which would result in a more drastic fall," the NWS said.

Drivers are asked to avoid flooded areas as well.

Credit: City of Anoka Twitter
Ice jamming on the Mississippi River is causing flooding in Anoka, according to the National Weather Service.