"It's a beehive. It will be an adrenaline rush tomorrow." 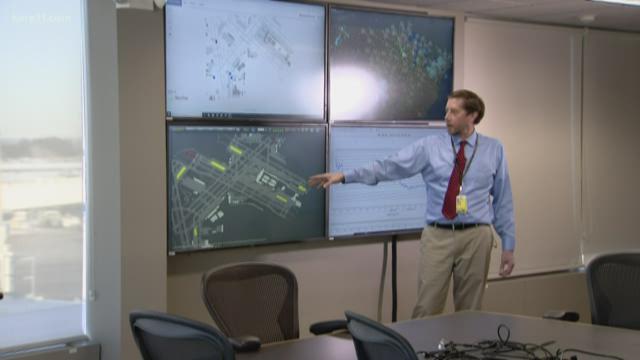 MINNEAPOLIS — With the first major snowstorm of 2020 set to descend on the Twin Cities, MSP Airport showed KARE11 how it will be coordinating its top-rated snow and ice response team.

MSP won a national award for snow and ice removal for its handling of record snowfalls in 2019, and this year the Airside Operations Center hopes to keep building on that success.

"It's a beehive. It will be an adrenaline rush tomorrow,” said Jeff Mattson, duty manager for the Airside Operations Center.

Mattson said he’s among 10 operations staff that will be monitoring the weather, coordinating with the FAA and local air traffic teams, and relaying information from snow removal teams.

“We have a GPS map for all our vehicles,” Mattson said. “Tomorrow it will be full because all of our maintenance vehicles are on there."

But even with 140 field maintenance staff rotating shifts throughout the storm, Jeff says plows and planes will still likely have to trade between two runways if the forecast holds.

“We could see an inch of snow per hour,” Mattson said. "We could be back and forth on here for five or six hours."

And if that happens, instead of 60 planes landing an hour, Mattson says they’ll be lucky to land 20-24 an hour.

"We're planning three hours out, so that the airlines can keep their planes on the ground safely at each coast,” Mattson said.

Though a lot of people will be working to keep planes moving, he says the priority is the passengers.

"I think of it as, if my family is on that plane, I want them to be safe,” Mattson said. "And if it's a situation that is not safe, we're not going to go down that road."