The system moved into western Minnesota mid-morning, creating difficult road conditions from Marshall in the south all the way to Fargo in the northwest. 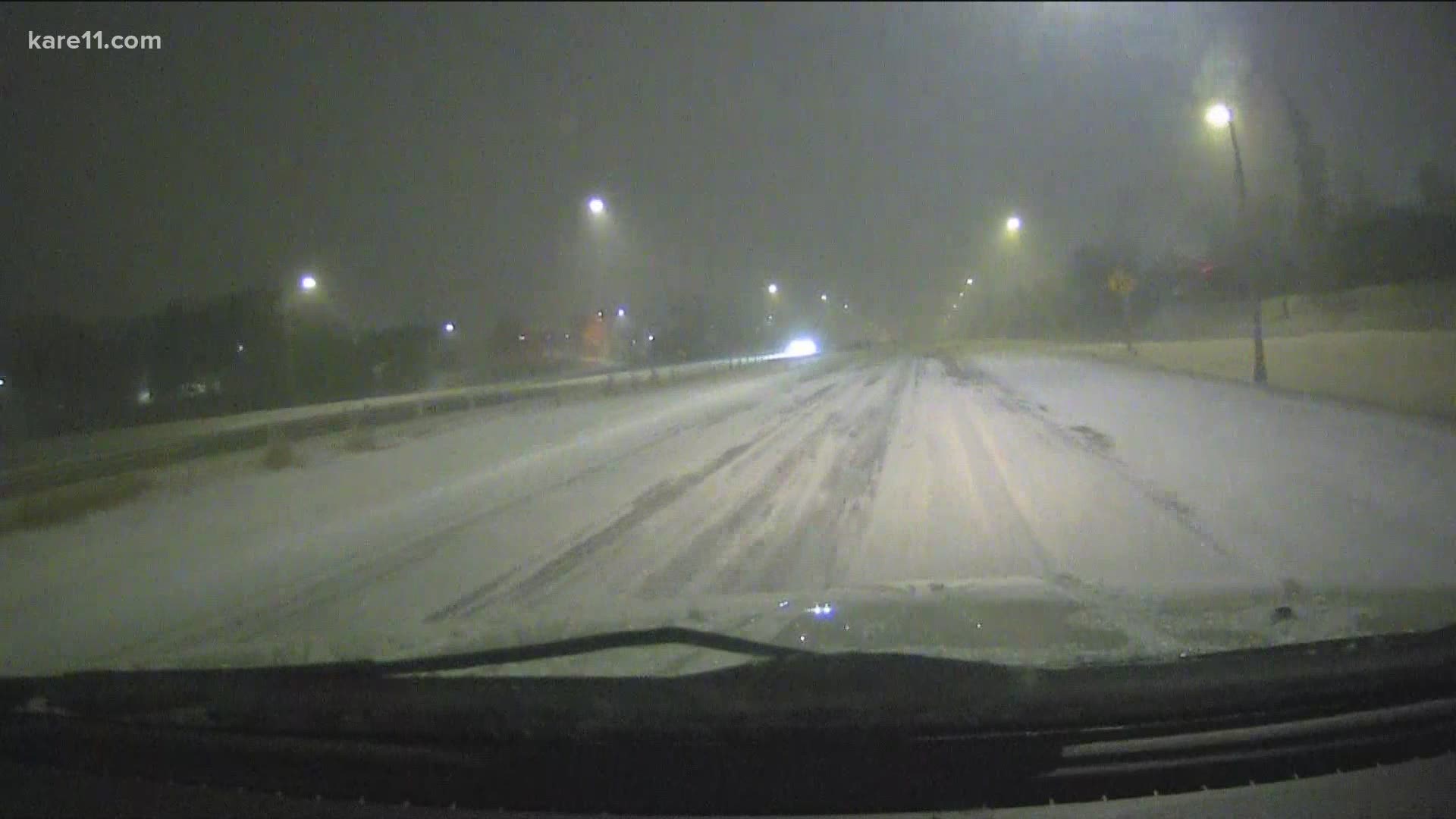 According to a news release, the National Guard has been activated in Renville and Martin counties already, and will be available in other parts of the state if needed.

The National Guard announced it is opening its armories in Olivia and Fairmont to provide shelter for stranded motorists in southern Minnesota.

The Minnesota Homeland Security and Emergency Management organization said in a Facebook post that the National Guard will use its small unit support vehicles (SUSV) to help rescue any stranded motorists in the Martin County area.

According to the Minnesota State Patrol, troopers responded to 59 crashes overnight across the state, and another 153 incidents of vehicles spun out or off the road between 9 a.m. Wednesday and 6 a.m. Thursday.

That follows a chaotic day on the roads Wednesday during the heart of the storm, with 376 crashes reported resulting in 51 injuries, all believed to be non life-threatening. Troopers also responded to 417 vehicles that have needed assistance after slipping off the roads as well as 30 jackknifed semi trucks.

The State Patrol said one trooper was injured Wednesday while trying to push out a vehicle that was stuck in the snow. Authorities did not provide details of the injury but said it was non life-threatening. The trooper was taken to a hospital. No further information has been released.

MnDOT said it has 800 snow plows, and 1,800 operators working 12 hours shifts, but they're facing a lot of challenges with this storm. 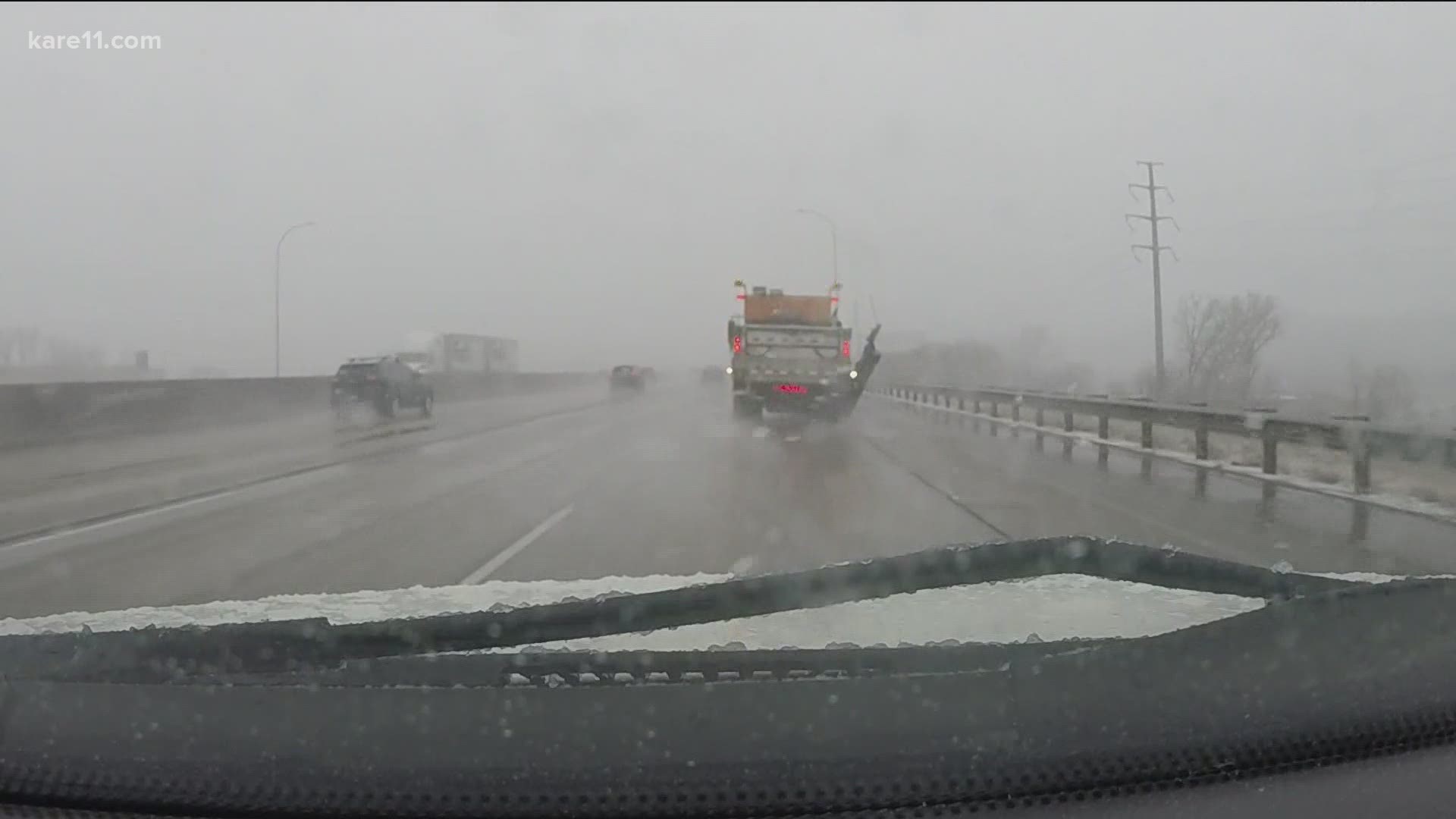 At the request of the Renville County Sheriff's Office, the @MNNationalGuard has opened its armory in Olivia to provide shelter for stranded motorists.

The Chisago County Sheriff's Office is reporting snow plows getting pulled off the road because of the poor visibility, urging people in the area to stay indoors.

The Minnesota Department of Transportation is reporting that eastbound traffic on Interstate 94 near Monticello is closed because of a multi-vehicle crash.

Eden Prairie police reported on Twitter Wednesday afternoon just after 3 p.m. that they are responding to an eight-vehicle crash at Flying Cloud Drive and Charlson Road.

Xcel Energy reported multiple power outages across the state, impacting about 38,000 customers. As of 4:30 a.m. Thursday, Xcel was reporting less than 600 customers were still without power across Minnesota.

“We know it’s the holiday season and we thank our customers for their patience and understanding as our employees respond to power outages,” said Lee Nordby, director of control center operations, Xcel Energy-Minnesota in a press release. “Our employees are working hard in difficult conditions to quickly and safely restore electric service.”

The Crystal Police Department is reporting that the power outage has impacted some traffic signals, making travel conditions even more difficult with the significant snowfall and gusty winds.

The system moved into western Minnesota mid-morning, creating difficult road conditions from Marshall in the south all the way to Fargo in the northwest.

At 8 p.m. MnDOT lifted its no travel advisory for parts of west central Minnesota. The advisory included Clay, Traverse and Wilkin counties, and the northwestern corner of Otter Tail County. While the conditions have improved in the area, officials are still urging motorists to use caution while driving due to low visibility and blowing snow.

No travel continues to be advised on I-94 from Moorhead to Rothsay and Highway 10 from Moorhead to Hawley, as blowing snow is causing whiteout conditions. Visibility is poor, in some areas down to zero. Snowplows will continue to operate, but motorists are advised not to travel in this area until conditions improve.

Officers are out on a crash involving 8 vehicles at Flying Cloud Dr./Charlson Rd. Because of near white-out conditions, southbound Flying Cloud Dr. south of Pioneer Tr. has been closed so emergency vehicles can respond.

KARE 11 meteorologist Ben Dery says that as of 1 p.m. rain has changed over to snow as expected, and road conditions have begun to deteriorate in the metro. He notes reports of ice completely covering roads from just south of St. Cloud through Hutchinson all the way to New Ulm. "This is where temps were warm this morning, and water flash-froze into ice," Dery explains. "This is possible for the metro as temperatures continue to rapidly cool. On top of the ice will be quite a bit of snow. So a hard, crusty inch or two underneath a bunch of fluffier snow."

Snow covered roads across the state at this hour with road closures and no travel advisories in southwestern MN. If you don't have to, do not travel. Check https://t.co/yhtPwRf2sU for changing road conditions and traffic impacts. pic.twitter.com/fpqREaxkwF

Ben says blowing and drifting is already happening out west, and can soon be expected in the Twin Cities metro. Wind gusts between 40 and 60 miles per hour will create white-out conditions in some areas.

Snow emergencies are starting to be declared around the Twin Cities, including Minneapolis and St. Paul. Monitor your city's website for when these emergencies will expire and for any additional information regarding the city's street laws.

A check of the MnDOT 511 map shows travel alerts on dozens of roads, and State Patrol sergeant Jesse Grabow posted video of a vehicle off the road on Highway 10 between Moorhead and Glyndon. Blowing snow made it nearly impossible to see.

MnDOT posted that no travel is advised in the far northwestern part of the state, due to blowing snow and limited visibility. "Challenging road conditions across the state right now and this could be coming your way soon," read a post on the department's Twitter account, along with some blizzard-like pics from the cabs of snowplows in various parts of Minnesota.

Challenging road conditions across the state right now and this could be coming your way soon. Take a look at these images from our https://t.co/yhtPwRwDks snowplow cameras in Moorhead, Brainerd and Sioux Falls. Make sure you are checking road and travel conditions in your area. pic.twitter.com/u9Ot4oOoDT

If you do have to go out, the Minnesota State Patrol reminds motorists to keep these winter driving "must-dos" in mind.

We can’t emphasize these things enough. Please, take your time today and slow down! #mnwx pic.twitter.com/OTwmpMLk3K

KARE 11 will be monitoring conditions on roads statewide and will update this story with the latest developments.

RELATED: Travelers take to the skies for one of the busiest travel weekends of the year 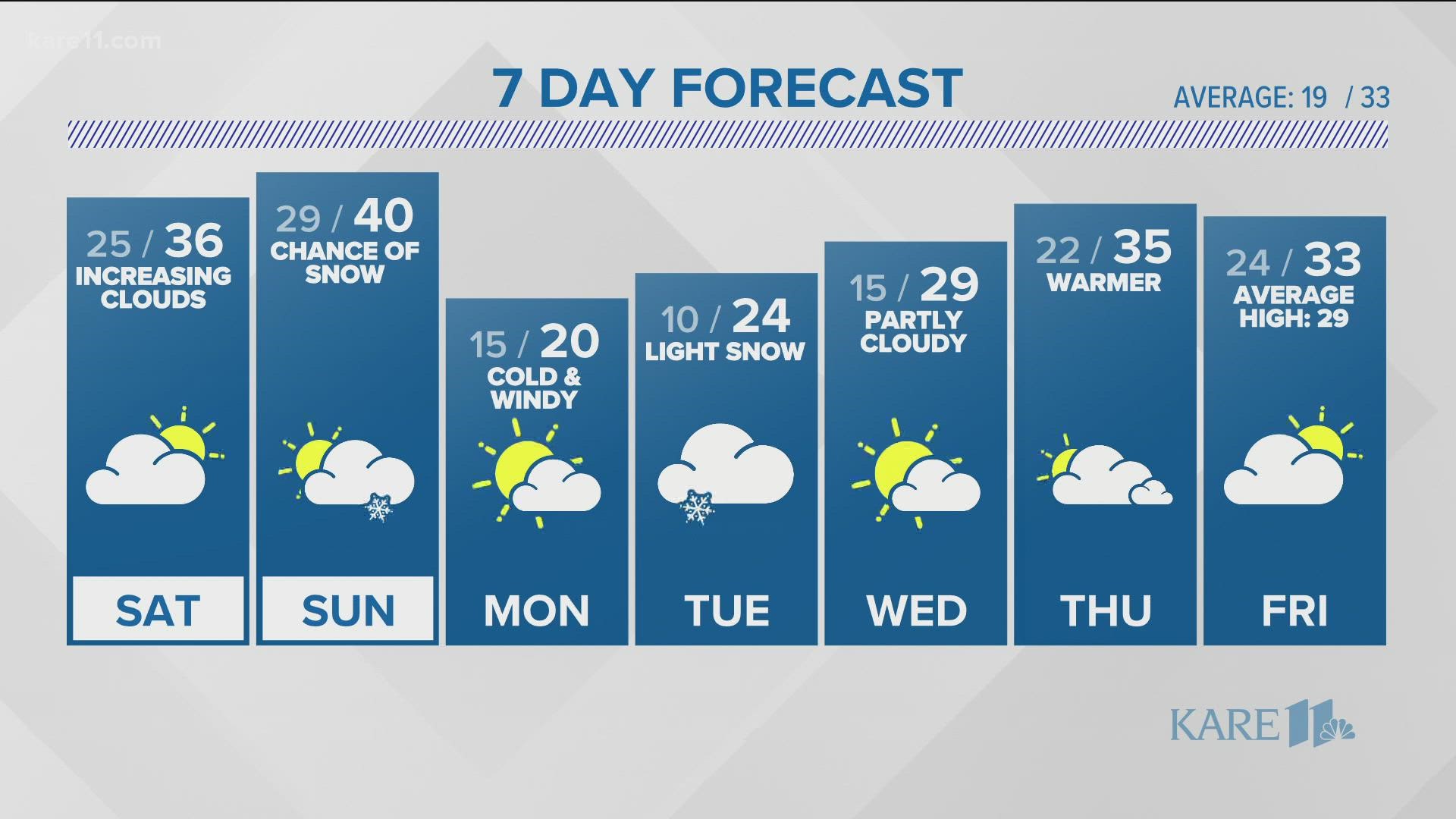