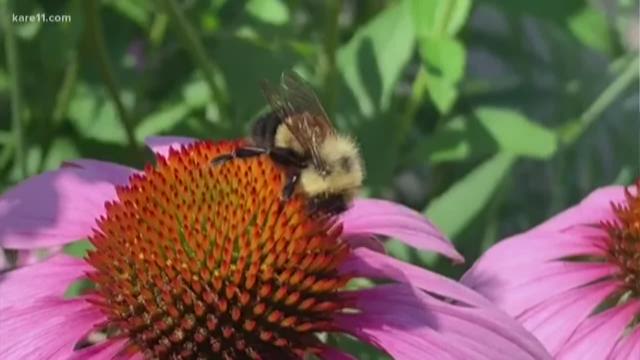 "Yes, we have many species of bumble bees!

We have a really great opportunity in the Twin Cities to help a critically endangered bumble bee- the rusty patch bumble bee, which also happens to be our state bee . We think they could be impacted by pesticides but they’re hanging on in the Twin Cities.

If you put in a pocket prairie, a tiny spot in your yard maybe a spot in your garden that’s not doing well, planting some native wild flowers & grasses.

The rusty patch bumble bee queens are the first to emerge in the spring & they’re out late into the fall. They really need a steady stream of blooming flowers. If people want some ideas on what a pollinator garden could look like in their yard they can come out to the Minnesota Valley National Wildlife Refuge in Bloomington, there’s lots of pollinator gardens by the visitor center & native habitat throughout. "

You can also help by getting involved with the U of M's extension service citizen science projects to identify and count rusty patch bees in addition to planting year-round native flowers. Information like these are available through the U of M & the National Wildlife Refuge in Bloomington.