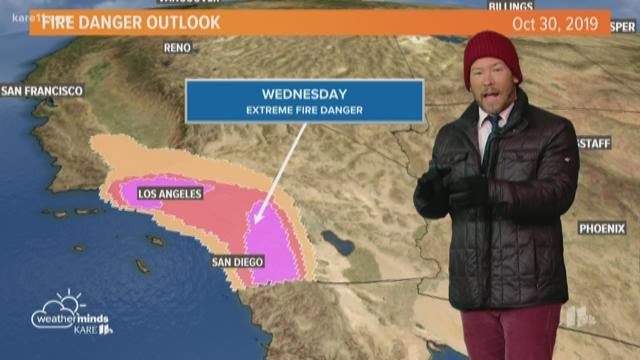 You've probably heard about the Santa Ana winds the last few days in relation to the California wildfires and if you haven't you will.

The Santa Ana winds are sometimes called the 'devil winds,' and it's easy to understand why. They are a typical wind developing sometimes in the Autumn when cool, dry high pressure sits over eastern CA or Nevada and pumps air outward to the south and southwest. These winds travel down from high elevations to coastal areas of California at rapid speeds.

The Santa Ana winds are a 'katabatibc wind' (which is Greek for descending). Very dry air from the desert dries even more by being pushed down the mountains. When air descends it warms (because the pressure increases). This creates a worst case scenario of high speed, hot, dry wind. Add fires to that, and things can get out of control quickly.

Santa Ana winds are expected to increase Wednesday along with a big drop in humidity which will be very dangerous for already raging fires throughout California. RELATED: WeatherMinds: September was the 12th warmest on record