Monday was the first day of fall. 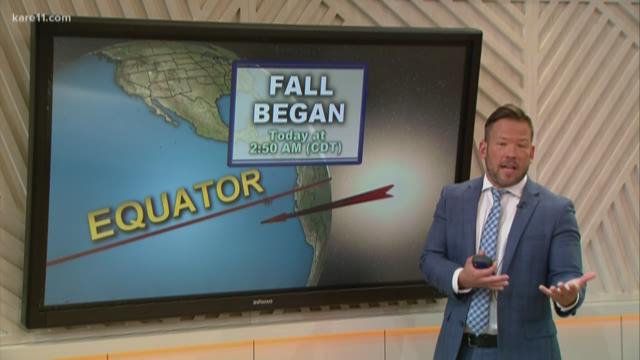 GOLDEN VALLEY, Minn. — While most of you were sleeping very early Monday morning the Autumnal Equinox occurred! What does that actually mean, though? Meteorologically it's been 'Fall' since September 1. We use 3 even months at a time for the seasons because it makes compiling stats easier, and frankly, it lines up better with that seasons' weather.

At 2:50 am this morning the sun's strongest, direct (90 degrees perpendicular to surface) rays crossed the equator into the Southern Hemisphere. You can think of it as the start of winter here really, or the beginning of spring in the Southern Hemisphere. Those direct rays will wander all the way to the Tropic of Capricorn by the Winter Solstice (Dec. 21) then start to march back north by late March.

To put it into perspective, obviously we sit right at 45 degrees latitude- the halfway point between the equator and the North Pole, so the highest sun angle we receive in June is 68.5 degrees. Right now it's about 45 degrees and by the winter solstice it's a very low 22.5 degrees. So roughly, the sun right now has 1/3 less intensity than it did when it was higher in June- but beware these sunny days, you can still get a burn if you're out long enough!