COVID-19 cases in Minnesota and Wisconsin continue to rise. 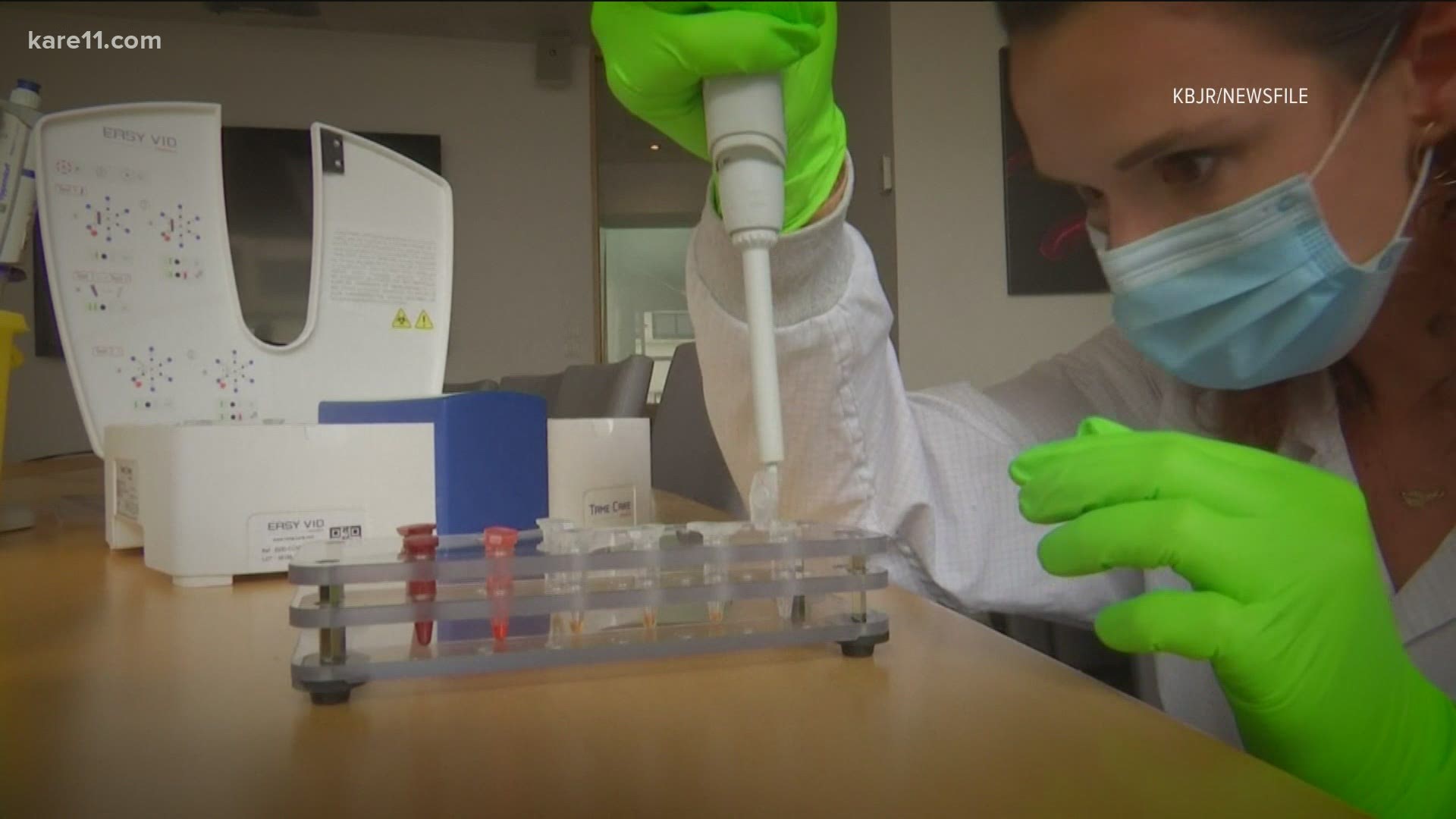 Walz highlighted the high rate of community spread in Minnesota, calling the upper Midwest a "hot spot" for coronavirus spread.

Once that happens, Walz said, the bad outcomes like hospitalizations and deaths begin to rise due to sheer numbers.

"We are certainly in a better place than our surrounding neighbors but that can change very quickly," Walz said.

The governor said that state leaders "have learned over seven months some of the things we can and cannot do that make a difference.”

One of the keys, Walz said, is testing and contact tracing to make sure that those carrying the virus, including those who are asymptomatic, can stay home and not infect others. Delays in testing and test results, the governor said, exacerbate that problem.

On Tuesday's call, Walz announced another step toward increasing that testing capacity and the speed with which people can get results back. He said two more saliva testing centers will open in Minnesota this week.

"It's not about anything other than breaking the transmission of this virus," he said. "States are getting this under control and Minnesota has done a really nice job of staying relatively stable, but ... you can go from stable and in a good position to building emergency hospitals on your fairgrounds like they did in Wisconsin."

On Wednesday, the second semi-permanent saliva testing site opens at the Winona Mall. On Saturday, the third site will open in Moorhead at the former Thomas Edison High School. The next site after that will be in Brooklyn Park, opening Tuesday, Oct. 20 in the Starlite Center.

You can schedule testing appointments from the list of locations as they continue to open, online.

“Ensuring our community has accessible health services is a top priority in Brooklyn Park right now,” said Mayor Jeffrey Lunde in a press release. “Thank you to the state and the county for making this COVID-19 testing site possible so we can ensure our residents and all Minnesotans stay safe.”

According to a release, these tests will be processed in Minnesota at the new Infinity Biologix (IBX) COVID saliva lab in Oakdale, which will open next week.

Later this month, two additional sites in greater Minnesota and four more in the metro area will be finalized.

"Cases are growing faster than testing is," said Minnesota Department of Health (MDH) Assistant Commissioner Dan Huff. "That is not good."

Huff said that the newest saliva testing lab will be able to process 30,000 tests per day, which would quickly bring Minnesota's capacity to 60,000 per day.

“I remember when 5,000 tests a day would seem like a high bar to reach,” Walz said. “COVID’s taken a lot from us but we’ve learned a lot.”

Huff said that the centers will bill insurance if the person getting a test has it, but "no bill will go to you."

"If you are uninsured or underinsured you will not receive a bill," he promised.

Duluth Mayor Emily Larson gave an update about the Duluth testing center, which has been open for about three weeks. Larson said her husband had to have two negative COVID-19 tests before being able to visit his father.

"We have had a hard time getting access to tests in other ways," she said.

Larson said her husband scheduled a test Friday and got his results Sunday morning.

"It's that kind of access that is game-changing for people," she said.

Larson said that being able to get a test easily helps people to have more confidence navigating the pandemic.

"We are all sacrificing in a big way and part of the frustration, I think, has been that we're making sacrifices and not even having access to the test to find out if we have it or not," she said.

Brooklyn Park Mayor Jeffrey Lunde said that with 20% of their population born somewhere other than the U.S., the city is launching a mobile health care initiative to take resources directly to people who struggle with transportation issues. He said that saliva testing will also help to accomplish this goal.

"Our residents form the backbone, the invisible backbone of the health care system. They're the people working at hospitals, they're the people helping to serve the rest of us," Lunde said. "And so that access to testing is critical so that we don't have people spreading it, so that we're all safe when we're being tested."

Lunde said that when he speaks with residents, he finds that they don't care about a "Republican solution" or "Democratic solution." They just want a solution.

"People just want to be safe, they just want to survive this, and hopefully they want things at some point to get back to normal," he said.

“One of the things we’ve learned over the seven months is to be more granular, to use the scalpel when we can," he said.

Walz said if Minnesota enacts any new restrictions, they would be "industry to industry" and more targeted. He pointed out that weddings and funerals are a large source of recent COVID spread.

“I think it would be dependent upon where the spread is coming from," Walz said, adding that people tend to get frustrated with wide-reaching restrictions.

Minnesota has recorded its sixth consecutive day of 1,000-plus new COVID-19 cases, a dubious mark that has state health officials concerned.

On Tuesday the Minnesota Department of Health (MDH) reported 1,150 confirmed cases in the past 24-hour reporting period, based on results from 19,444 tests processed in private labs. That brings Minnesota's coronavirus case total to 114,574 since the onset of the pandemic.

Seven more people have died of COVID-19, bringing fatalities to 2,151. Of those deaths 1,524, or 71%, have occurred in long-term care or assisted living settings.

MDH says 8,500 people have been hospitalized for treatment of the coronavirus, with 2,328 of them requiring care in the ICU. As of Tuesday 102,624 people who at one time tested positive for the virus have improved to the point they no longer require isolation.

Minnesota's largest grouping of fatalities involves those between 85 and 89, who account for 369 deaths in just 1,538 confirmed cases. That means 24% of people in that demographic who were diagnosed with COVID died from it.

Hennepin County has the most COVID activity of any county in the state, reporting 30,698 cases and 955 deaths, while Ramsey County has 12,532 confirmed cases and 335 fatalities. Dakota County reports 8,673 cases and 132 deaths.

Cook County has the least COVID activity of any county in the state with nine cases, while Kittson County reports 17 cases.

Minnesota health officials are giving a live briefing about the area's COVID-19 situation.

Health Commissioner Jan Malcolm said the United States' case growth seemed on track to surpass its rates from the spring. She said in Minnesota, the case numbers from the past week show COVID-19 is still a "growing problem" locally.

"There's a lot more disease out there than we have seen in the past," she said.

Ehresmann said officials are still seeing increases in cases associated with bars and restaurants, but that the increase has slowed. She said that might be due to restaurant and bar operators learning how to decrease transmission risk.

MDH Director of Infectious Disease and Epidemiology Kris Ehresmann said three Minnesota cases are associated with President Trump's most recent Duluth rally, two of which were in the same household. Three other cases are associated with Mike Pence's rally at MSP Airport, and four new cases said they attended Trump's Bemidji rally. That makes for 12 total cases from that Bemidji rally, with another four reported from a counter-protest of the same event in Bemidji.

A total of two cases were tracked to Joe Biden events, one from a Duluth event and one from a Brooklyn Park event.

Facilities will be determined as low, medium, or high-risk for COVID-19 transmissions, with different levels of visitation associated with each risk level. Outdoor visitation will continue.

Krueger said visitors need to follow guidelines, like masking and social distancing. The new rules go into effect on Oct. 17.

Officials were also asked about their role in creating COVID-19 guidelines for professional sports teams like the Vikings. Ehresmann said the teams often have their own internal guidelines, which can be more strict than statewide ones.

The Minnesota Department of Health (MDH) has reported another day of more than 1,000 new COVID-19 cases.

Just under 18,000 COVID tests were administered by private and state labs in Minnesota in the past 24-hour period - significantly lower than the previous four days, which averaged about 30,000 per day.

Three people have died of COVID-19 in the past day, bringing Minnesota's death toll to 2,144.

Over the weekend, the Department of Corrections (DOC) reported that Minnesota Correctional Facility-Stillwater is going into lockdown, with 90 new cases reported in the past week. The DOC says 115 of the prison's 1,273 inmates have tested positive, and all but two cases are from the same two living units.

As of Monday, MDH reported that there are 1,869 total known COVID-19 cases in Minnesota prisons, among staff, inmate and visitors.

Among Stillwater's cases, one 70-year-old is being treated outside the facility, and the rest have only mild symptoms or no symptoms, according to DOC.