Milder temperatures sticking around through early next weekend 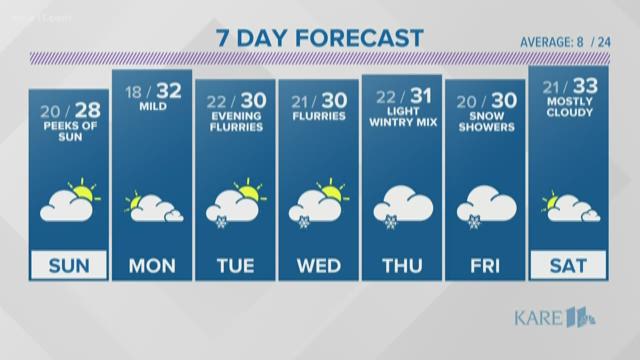 GOLDEN VALLEY, Minn. — Clouds will hang around during the overnight hours, and it should get a few degrees cooler to start the day off on Sunday with overnight lows near 20 in the Twin Cities and in the teens outside the metro.

After a cloudy start to the weekend, hopefully a few more peeks of sunshine will pass through with skies staying partly sunny to mostly cloudy throughout the day on Sunday.

Afternoon highs will dip a few degrees, topping out in the upper 20s, but still staying a few degrees above the average of 24. Winds will also remain near calm, which means the wind chill isn't going to really play a factor for Sunday.

Sunday night, we’re still staying mild with overnight lows in the upper teens. The average low is 8. And by Monday afternoon, we’re really just stuck on repeat with highs near 30 and mostly cloudy skies.

In fact, temperatures will stay near 30 for the afternoons all the way through the end of the week and into the weekend. We could see a few flurries Tuesday through Friday, with morning lows in the lower 20s.

Have a weather-related closing?

If you have a school, organization or activity that you would like included in the KARE 11 closings list fill out the form below.