"Here's all the pieces here, there is tread on this one," Chris said. "It's definitely emotional. Just imagine your son's head was inside of this." 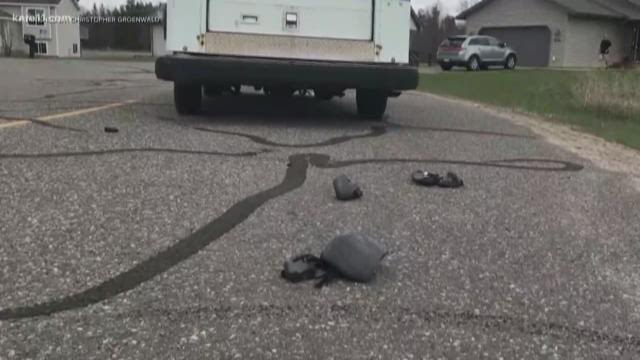 "I thank the lord that we had a helmet on him," Chris said, pointing to what's left of a bike helmet belonging to his four year old son, Cohen.

"Here's all the pieces here, there is tread on this one," Chris said. "It's definitely emotional. Just imagine your son's head was inside of this."

Chris doesn't have to imagine, because his worst nightmare unfolded on Saturday afternoon, as he walked to the end of the driveway to greet the US Mail truck.

"It just takes, a second," Chris said. "I got the mail and I turned around, and then I turned back around in time to see the front of the vehicle pop up a little bit. I heard, kind of a popping sound, which I assume was the helmet."

As the vehicle moved forward, Chris said he heard Cohen begin to cry.

"I remember seeing him come out that back end, between the two rear axels," he said. "There was just a little piece of the helmet still on him."

Chris, an EMT and firefighter, quickly ran to his son expecting the worst, but he couldn't find any sign of serious injury.

"It's definitely a miracle," said Becca Groenwold, Cohen's Mom. It still feels like a dream, like it didn't really happen because he's just so okay."

Becca was working at the hospital in Brainerd when her son arrived in an ambulance. She too, was stunned to find nothing but minor bruises on his head and scrapes on his body.

"He's already pretty much healed, he's just a rockstar," she said. "People don't just get run over and turn out okay. Wear your helmet, no matter if it's in your driveway, or just right around the block. Wear your helmet at all times. Anything can happen in a moment."

Baxter Police Chief, Jim Exsted, says the driver of the mail truck isn't facing any charges related to the accident, though he says the driver could face an unrelated citation.

A spokesperson for the US Postal Service tells KARE11 they are still investigating the incident, but they say their immediate concern is with Cohen. They "wish him a full and speedy recovery".