"Residents currently are not being asked to evacuate. Residents are asked to stay away from the immediate area of the fire." 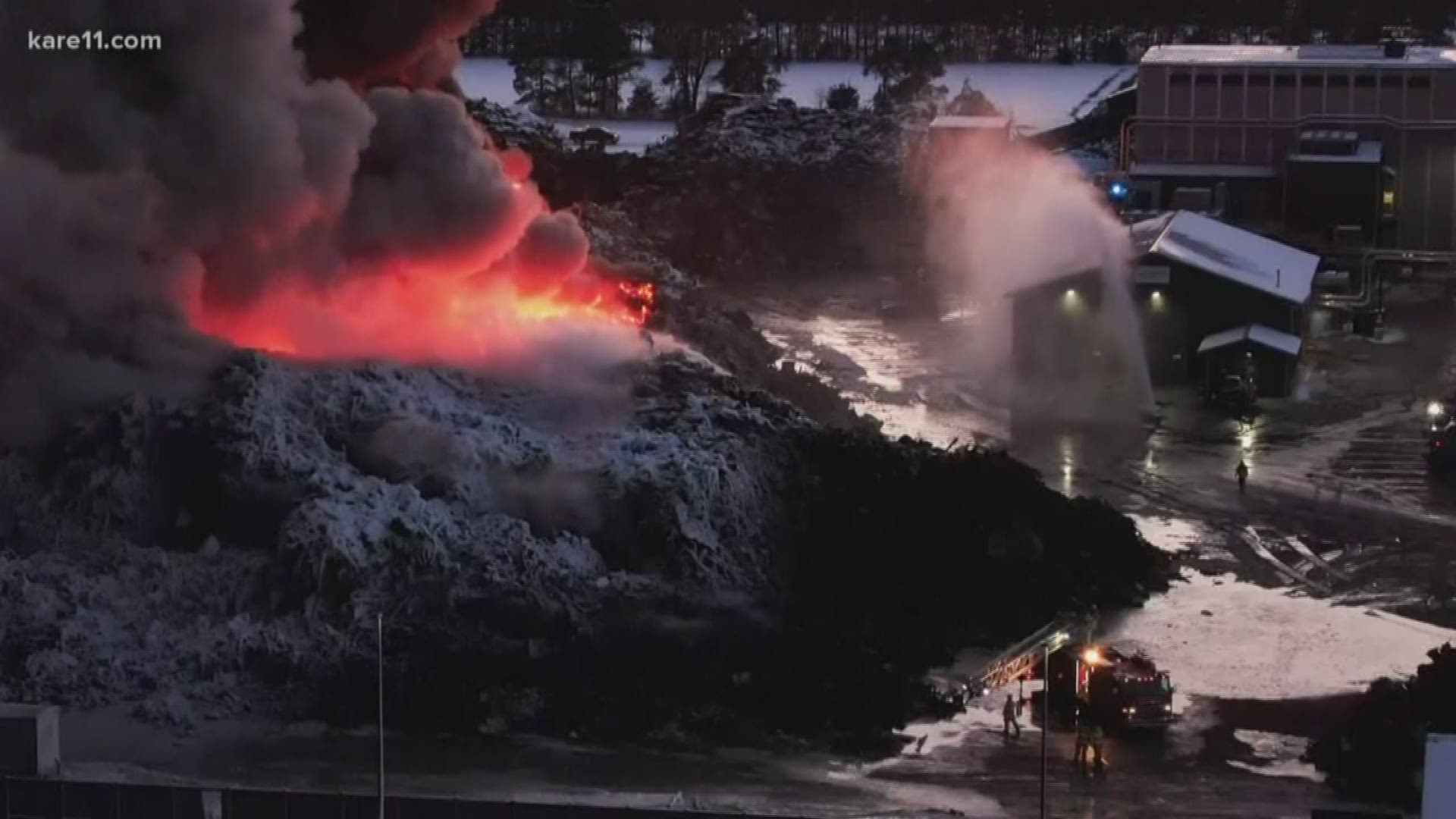 BECKER, Minn. — Police say a fire at the Northern Metal Recycling Plant in Becker, Minnesota could last "several more days" as concerns continue to rise about air and water quality.

The fire was first reported by a passerby at about 2:25 a.m. Tuesday. Becker Police Chief Brent Baloun said the fire appears to have started in a pile of "crushed up vehicles" in the Northern Metal lot. Officials have now decided to separate part of the burning vehicle stack and "let it burn itself out," according to police.

"Never seen such a thing," resident Kevin Baragar said. "You can hear all the explosions and stuff going on in there. Yeah, I'm worried."

In an update posted to Facebook on Wednesday, police said 18 fire departments were continuing to assist in the firefighting efforts overnight and into the early morning hours. The Minnesota National Guard has also been assisting. Fire investigators now believe that the fire could last several more days.

Police said water quality testing is being completed on site. "The state has provided advice on how to prevent firefighting runoff from reaching surface waters," police said in a news release Wednesday. "There is no concern about contamination at this point."

Local officials also called in personnel from the Minnesota Pollution Control Agency and the Minnesota Department of Health after receiving "numerous inquiries" about air quality due to the large amount of smoke and the chemical smells that smoke was carrying.

Becker Police said Wednesday that testing is being done on air samples, and based on the work of the MPCA and MDH, "residents currently are not being asked to evacuate. Residents are asked to stay away from the immediate area of the fire."

"The Minnesota Pollution Control Agency and Minnesota Department of Health recommend that people who have concerns about their health should seek advice from a medical care professional," police said in a news release. "In the meantime, advice to shelter in place or move away from the source of the smoke is the right advice for nearby occupants."

“I’m pretty concerned for my wife who is pregnant, my kids, my neighbors," said Blake Schreder, who can see and taste the smoke cloud from his driveway 10 miles away in Big Lake. "It’s varied, from plastic, to electrical, to almost what you would smell on a farm, when someone’s burning tires.”

Big Lake Police posted on Facebook Wednesday afternoon saying that they have been fielding many air quality questions as well, after a shift in the wind.

Big Lake Police Chief Joel Scharf wrote that the only information they have at this point "is the advisory that you should remain indoors if you have respiratory conditions or breathing difficulties." 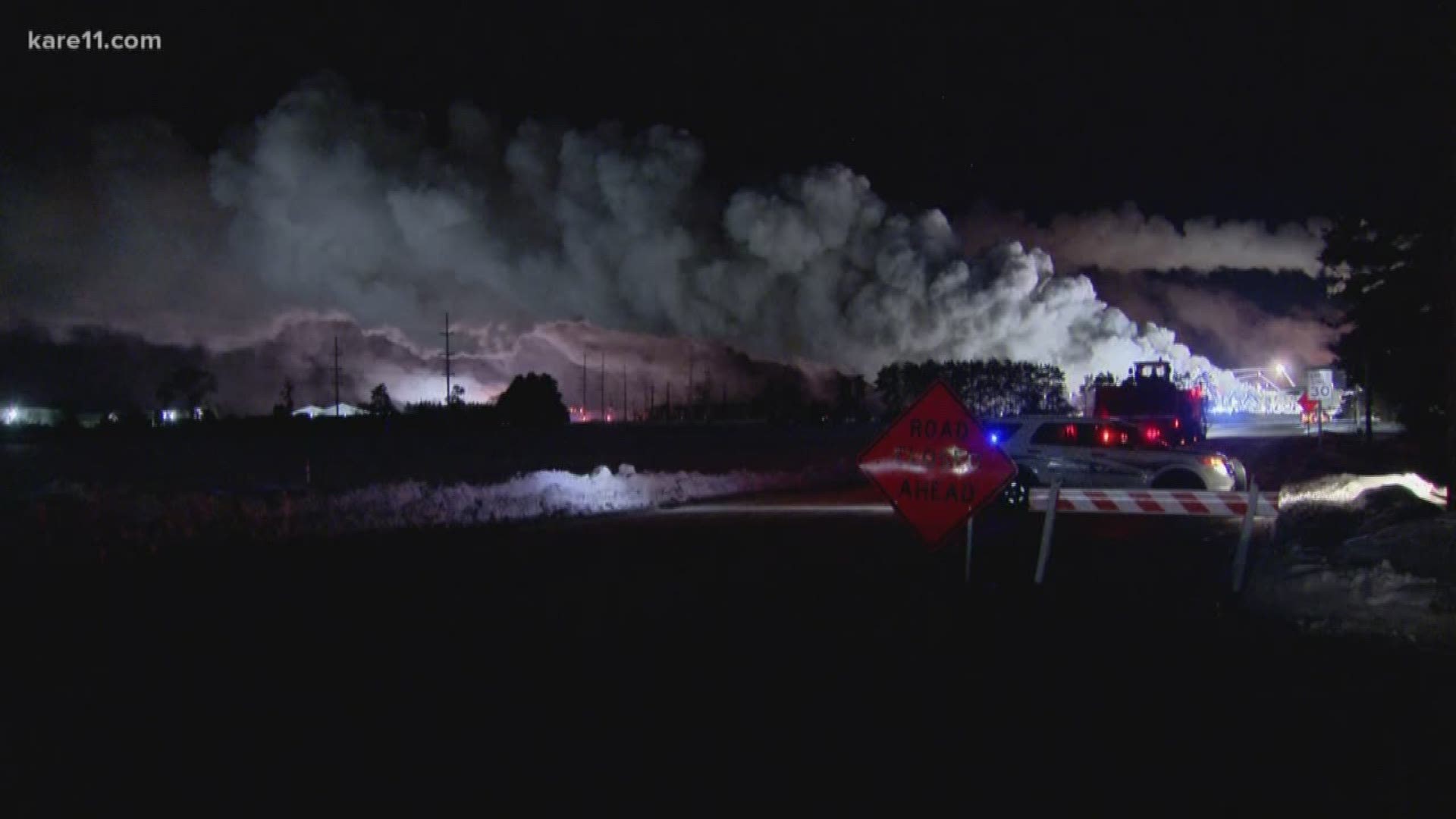 Fire crews from Becker, Clear Lake and Big Lake initially responded to the fire. Northern Metal employees helped the fire departments get access to the location, and assisted in moving debris around.

"It's sad. It's a lot of work. And I hope everyone just stays safe," Milissa Johnson said as she watched the flames, which are being fought by her firefighter brother. "He's been on the ladder, on the ground, running the water line."

No one has been injured and no buildings were involved in the fire.

The Northern Metal plant is located at 12432 Energy Drive, in the Becker Industrial Park. Northern Metal moved its shredding operation from Minneapolis to Becker last year after the Minnesota Pollution Control Agency (MPCA) ordered it shut down due to high levels of air pollution and inaccurately recorded pollution readings.

RELATED: The Press Bar in St. Cloud a 'total loss' after fire