Minnesota Democrats reflect on one year since George Floyd's death 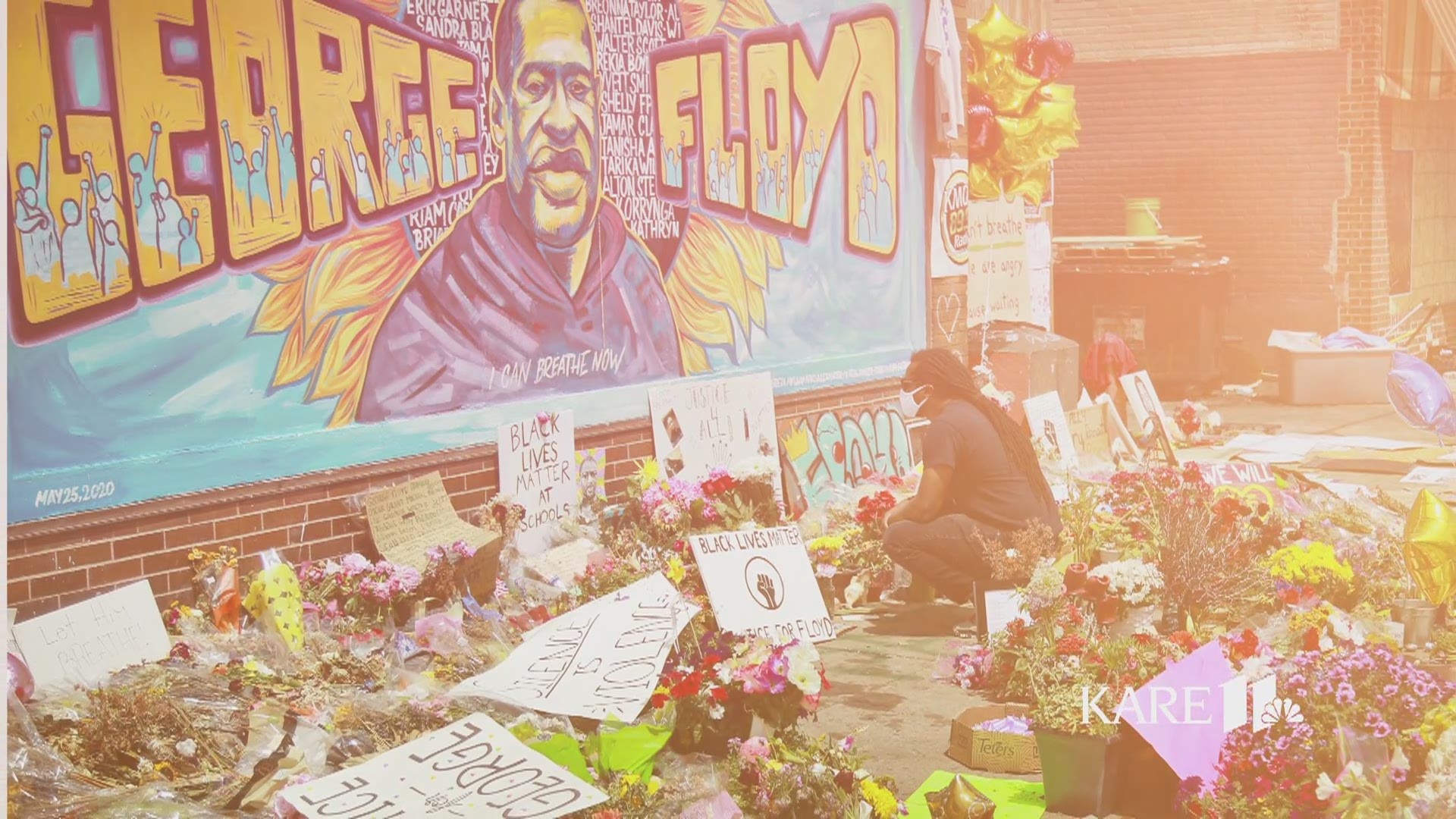 ST PAUL, Minn. — Minnesota Democrats from the federal, state and local level have released statements reflecting on the one-year anniversary of the death of George Floyd in Minneapolis.

"Today, we honor and remember George Floyd. In the days following his murder, Minnesotans raised their voices and called for real, meaningful change to prevent this from ever happening again. Those calls for action spread across the world as his memory sparked a global movement. George Floyd didn't ask to be an international symbol of the pain that Black Americans have faced for generations, and yet, in the words of his daughter, he changed the world.

"We must honor George Floyd’s memory here in Minnesota by ensuring all people—particularly in our communities of color—are respected and protected by law enforcement. Let us recommit ourselves to seeking meaningful police reform and working together to make lasting change in Minnesota. The calls for action from Minnesotans across the state and people across the world cannot go unanswered.

"To those who were closest to George, to his family, his friends, and his little girl, I know the pain of your loss will never fully subside. As you carry your grief forward, know that George will continue to be a catalyst for change, and together, we will ensure that his legacy leads to a better Minnesota for future generations to come."

"George Floyd should be alive today.

"Since the day he was murdered by Derek Chauvin, we have been confronted with what many Black Minnesotans and Minnesotans of color have known for generations: Too often, your race and identity determine your safety in our state. The injustices in policing and public safety that people of color – especially Black people – face in Minnesota were exposed for the world to see for 9 minutes and 29 seconds. We heard the grief and anger and cries for justice in streets across the globe. It is our collective responsibility to move past ‘Minnesota Nice’ and push through our discomfort; to listen and to act.

"We took the first steps toward meaningful police reform in the Minnesota Legislature – but that can only the beginning. We have more work to do to ensure that every person in Minnesota is safe, valued, and protected in their communities. We have more work to do to ensure that this does not happen to anyone else’s father, brother, cousin, friend, neighbor, or child. We must re-imagine how we approach the issue of public safety overall. I am very clear that if Minnesota is safer for the Black community, it is safer for all of us. We are linked – our pain and our joy, our futures are woven together, and we must support each other as relatives.

"My heart is with the Floyd family and with Minneapolis. No amount of legislation or convictions will bring George Floyd back to his loved ones – to his little girl, Gianna. But his daughter was absolutely right when she said that her daddy changed the world. Now it is up to us to change our hearts and to do the work."

"Today marks one year since George Floyd was murdered by a Minneapolis police officer. One year later, as the world knows and says his name, Ma’Khia Bryant, Breonna Taylor, Daunte Wright, and so many taken from their families, the greatest impact is felt by the daughter who lost her father. A family that lost a brother and son. A community that lost Mr. George Floyd.

"As we look ahead, Black Americans, including those residing in Minneapolis, are still too routinely denied justice. It’s impossible to course-correct centuries of systemic racism and anti-Blackness in any one single effort, but that doesn’t lift the responsibility to deliver results that match the precision of the harm inflicted over generations. It is unacceptable to say Black Lives Matter only after a Black person has been murdered. We need to show it in our actions every day. We need to work together towards real systemic changes and that’s exactly what we intend to do."

"One year ago, George Floyd was murdered. He was murdered on videotape -- the whole world saw it happen. While Derek Chauvin’s conviction brought some accountability, it did not bring us true justice.

"To confront the systemic racism in our justice system, we must work towards systemic change. It is past time for Congress to move forward on police reform and pass the legislation named in George Floyd’s honor."

It has been one year since George Floyd’s murder. While Derek Chauvin’s conviction was a first step towards accountability, it did not bring us true justice. As lawmakers, it’s on us to make needed change.

The Senate must pass the George Floyd Justice in Policing Act.

"George Floyd loved people and had the love of people all around him — especially the love of his family that was always there for him. Everyone who knew and loved him misses him to this day, and always will.

"None of the people who stopped and raised their voices one year ago — people of all backgrounds — even knew George Floyd, but they knew in their bones that what they were seeing was wrong. They knew it was their duty to care for Floyd in any way they could and bear witness to his death, even though they didn’t know him.

"Floyd’s death one year ago today sparked a worldwide movement because it didn’t happen in the flash of an instant: it took place over nine and a half excruciating minutes before people armed only with cell phones, who made sure it played out in front of the world.

"African American communities have been gaslit by people in authority for 100 years: they have been repeatedly told that state-sanctioned violence in their communities is their fault and that they are the criminals, not the ones committing the crimes against them. But this time, the witnesses to George Floyd’s death and everyone in the world who watched their videos refused to be gaslit. They believed their eyes.

"After 100 years of tragic incidents of police-involved deaths of African Americans and others, all fair-minded people want to fix the problem — but as James Baldwin said, “Nothing can be changed until it is faced.” We must face that for 100 years, we have been caught in a cycle of state-sponsored violence that leads to uprising and protest, that leads to commissions and studies, that dead-ends in inaction, that leads to more state-sponsored violence. Noted African American psychologist Dr. Kenneth Clark made exactly this point to the Kerner Commission in 1968, more than 50 years ago.

"We can break this cycle. The moment for making meaningful change is now.

"The time for legislators at every level — federal, state, and municipal — to act is now. As the person who is leading the prosecution in the death of George Floyd, I know that guilty verdicts are important, but are not the total change that we need. I call on Congress to past the best version of the George Floyd Justice in Policing Act that can be passed, as soon as possible. Lives are depending on it.

"The time for prosecutors to commit themselves to equal justice for anyone who commits a crime whether they wear a badge or not, and to the proposition that no one is above the law and no one is beneath it, is now.

"And the time for all Americans of all backgrounds to do the hard work of ending racism and white supremacy once and for all is now.

"For a century, and despite the best efforts of many, America has chosen inaction over climbing this mountain. But the other side of this mountain is better — not only for African Americans, but for everyone.

"Finally, my thoughts today are with the Floyd family as they mourn their beloved 'Perry.' Every day during the recent trial, they came to the courthouse to bear witness in the spirit of justice and accountability. They stood not with vengefulness, but with dignity and respect for each other and all people. They faced their worst fears and have turned their loss into hope and optimism for a better society. When we all become more like the Floyd family, we will find the courage to climb the mountain and make the change we all need."

For 100 yrs, we have been caught in a cycle of police-involved deaths that➡️uprising & protest➡️ commissions & studies➡️inaction➡️more death. We can break this cycle: the moment for making change is now. My stmt on the anniversary of George Floyd's death. https://t.co/eYpkyqJiAa

"One year ago, our community watched in horror as a police officer murdered George Floyd. His death ignited a movement to affirm and uplift Black lives around the world. As we commemorate the anniversary of his death, we must continue to push for progress and not let our cries for justice echo unanswered.

"Let this be the moment we implement sweeping reforms to our criminal justice system. In Congress, I have worked to change policing by helping pass the George Floyd Justice in Policing Act in the House. We now must push the Senate to vote on this critical piece of legislation and keep the provision to end qualified immunity in the final bill. To see lasting justice, we need accountability. Last month, I also reintroduced a package of bills to address continued police brutality and misuse of force.

"Today, we remember George Floyd and uplift all who loved him. Now is the time to address centuries of brutality. Let's seize it.”

Today, we remember George Floyd and uplift all who loved him.

Now is the time to address centuries of brutality. Let's seize it. ✊🏽pic.twitter.com/YQ9r3xFg7p