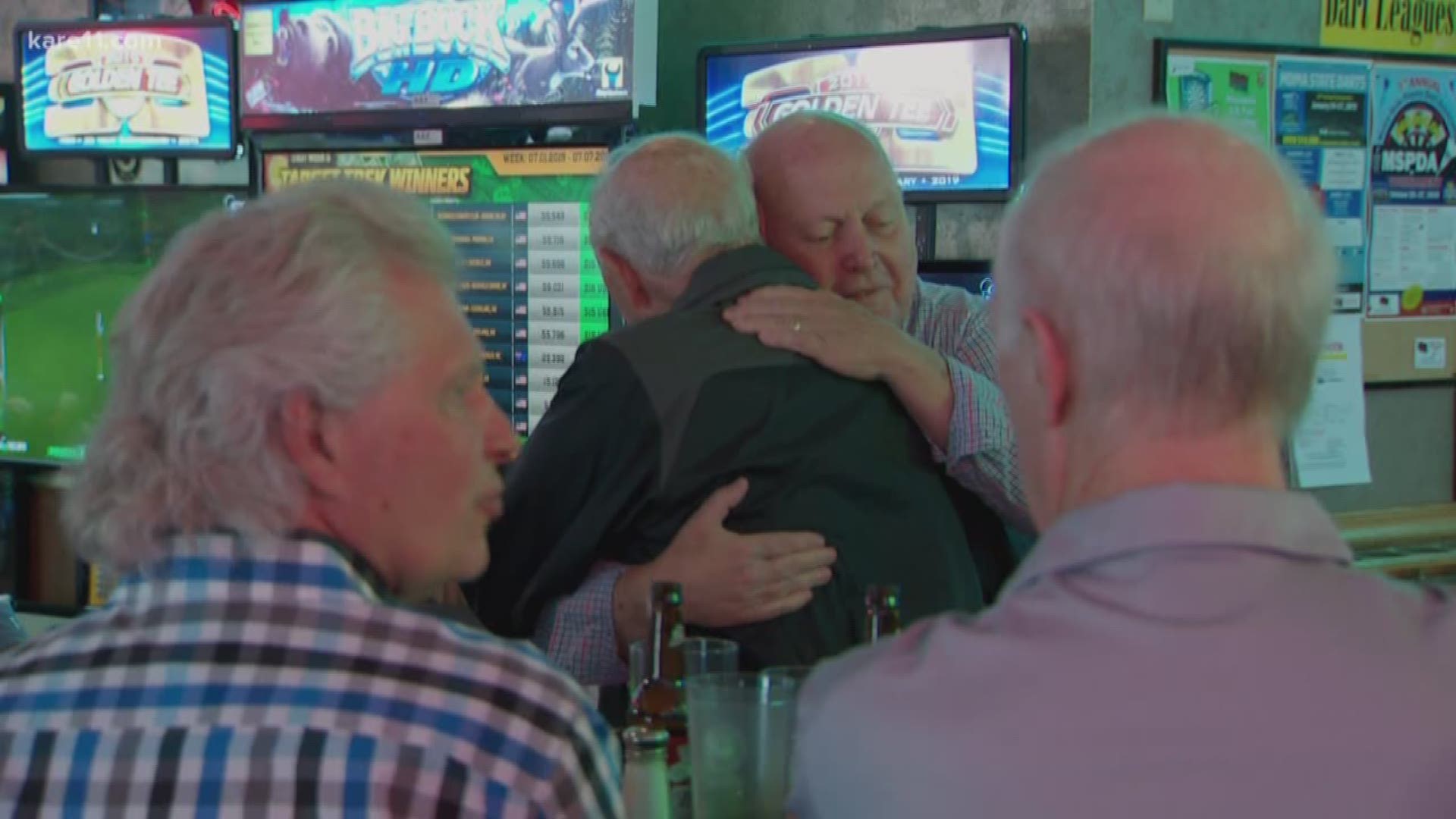 VADNAIS HEIGHTS, Minn. — It’s the kind of gathering that men pushing 70 might hold to toast a beloved high school coach after his passing.

The coach of the ’67 and ’68 St. Paul Johnson High School hockey teams is still enjoying the company of the players saluting him.

“This is all about the family,” coach Lou Cotroneo tells his skaters, most retired and some now walking on replaced hips and with canes.

Cotroneo repeats himself in case anyone missed it the first time. “This is all about the family.”

The monthly lunch meetings bringing together high school skaters from the 1960s with their 88-year-old former coach started nearly four years ago.

Scott Frantzen, class of ’68, organized the first and has summoned the team every month since.

Like most of the attendees, Frantzen still refers to Cotroneo as “Coach.”

“I don't have the courage yet, at almost 69, to call him Louie,” Frantzen says with a laugh.

In truth, the title remains in front of the name more out of respect than fear. “He’ll always be the coach,” Frantzen said. “We just all enjoy being with him.”

The ’67 and ’68 Johnson Governors had an impressive run: just four losses in two seasons, one of them in the state championship game.

But Cotroneo planted seeds beyond the winning records, from which his players have reaped their whole lives.

“The being a good person,” is how Jimmy Proulx, class of ’69, describes it.

Out-of-town tournament over a Sunday: Coach Cotroneo would see to it that every player was delivered to the church of his choice – sport coat and tie mandatory.

Everyone at the “family” table Proulx has had set at his Vadnais Heights bar has a story.

“Senior year, halfway through, I had a heart condition that took me out of the game, and he was first person to call me that night I got home from the doctor,” Neil Johnson, class of ’67, says.

Johnson continues, “He let me go in the locker room, he took me on the trip to Roseau, he introduced me at assemblies as a part of the team and he just made me feel like I was part of the team. I’ve never forgotten it.”

Horton’s mother passed away in 1965 during his 9th grade year.

“I remember vividly when at our mother’s visitation the funeral home’s doors opened and the entire Johnson Hockey Team filed in wearing their dress blazers led by Coach Cotroneo. I was a mess, but was so awed by it all, I knew I wanted to be in their league and be an influence as they were.”

Credit: Chad Nelson, KARE
Former Johnson High School hockey coach Lou Cotroneo (back to camera) gets a welcome hug from Scott Frantzen, one of his skaters.

Horton says his family life was tumultuous during his high school years, with his mother gone and his father working extra jobs to make ends meet.

“But being part of the varsity hockey program was a stabilizing sanctuary that I thank Coach for,” Horton said. “Coach became, in essence, my guardian during my time away from home. The rules, guidelines, and expectations certainly kept this one heading in the right direction.”

When Cotroneo took a player under his wing, it was for life.

Proulx says much in a few words: “Just like he's your second father really.”

Credit: Boyd Huppert, KARE
The monthly lunch gathering by the members of the '67 and '68 Johnson High School hockey team with their coach Lou Cotroneo.

Coach Cotroneo hoisted their last trophy more than half a century ago.

He still hasn't let them down.

“Hey, I'm as close to you as the telephone,” Cotroneo tells one of his “kids” as he hugs him goodbye.

Later this year the former coach will turn 89.

“If you ever need anything give me a holler,” the coach tells his skater.