At the store's request, the couple was issued a notice of trespass by Marshall PD. 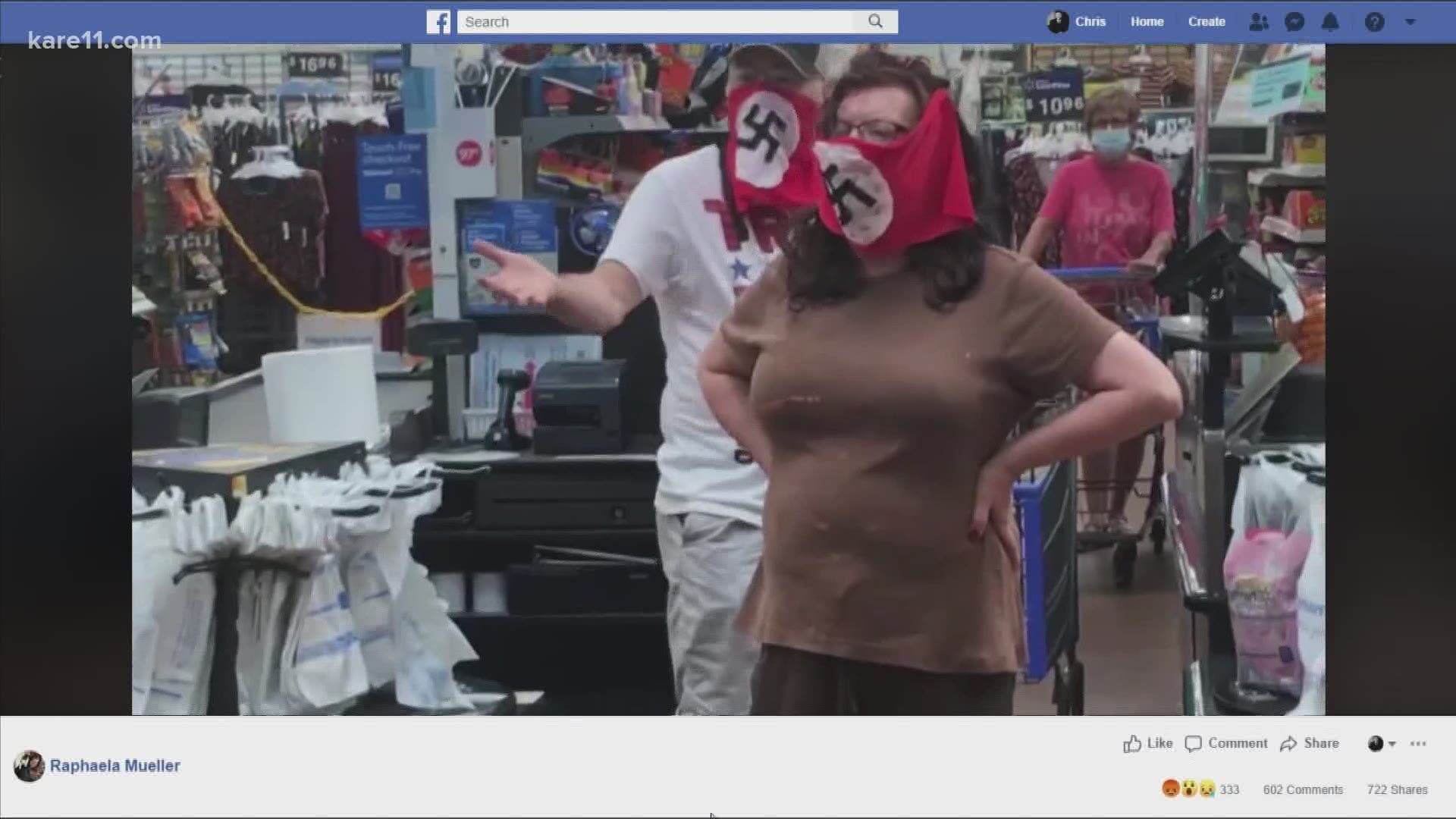 MARSHALL, Minn. — Walmart officials have confirmed a store in Marshall, Minnesota was the scene of an incident Saturday when two individuals entered their store wearing swastika masks.

The 59-year-old man and a 64-year-old woman confronted another group of shoppers who recorded the incident on their phone. Video on social media subsequently went viral.

In the video, the swastika-wearing duo is confronted by bystanders offended by their use of imagery associated with Nazi iconography employed during WWII.

Marshall PD says they responded to the incident around noon on Saturday, on reports that the couple's masks were causing a disturbance.

According to Marshall PD Sergeant Jason Buysse, his department issued a notice of trespass to the two shoppers.

WARNING: The following video contains language and imagery that viewers may find offensive or disturbing.

This couple wore Nazi flags around their faces inside a Walmart in Marshall, MN to protest the statewide mask mandate that took effect today. I confirmed with a store manager. Video was posted to FB by Raphaela Mueller pic.twitter.com/t3v96PKh25

In the video, other customers announce their disgust over the masks.
The woman in the video says back to one of them quote "If you vote for Biden, you are going to be in Nazi Germany."

Police were called and tell us they issued notices of trespassing to the 64-year-old woman and 59-year-old man, a warning basically, at the request of Walmart. Police say the pair were cooperative and left the store.

“What happened today at our store in Marshall, MN is unacceptable. We strive to provide a safe and comfortable shopping environment for all our customers and will not tolerate any form of discrimination or harassment in any aspect of our business. We are asking everyone to wear face coverings when they enter our stores for their safety and the safety of others and it’s unfortunate that some individuals have taken this pandemic as an opportunity to create a distressing situation for customers and associates in our store.”

Walmart says the trespass notices issued to the couple prevent them from visiting any Walmart facility for at least one year.

The Minnesota chapter of the Council on American-Islamic Relations, CAIR, released a statement on Sunday night, condemning the incident and calling on Walmart and public officials to reject the hate they felt was displayed in the customer's actions.

“We denounce this hate symbol and all hate speech targeting the Jewish community and stand in solidarity with those impacted by the bigotry these individuals displayed,” said CAIR-MN Executive Director Jaylani Hussein. “All Americans must work to dismantle the systemic racism that continues to target minority communities.”