A draft ordinance presented to the Minneapolis City Council on Tuesday would require all employers to raise the minimum wage to $15 per hour gradually over the next five years. 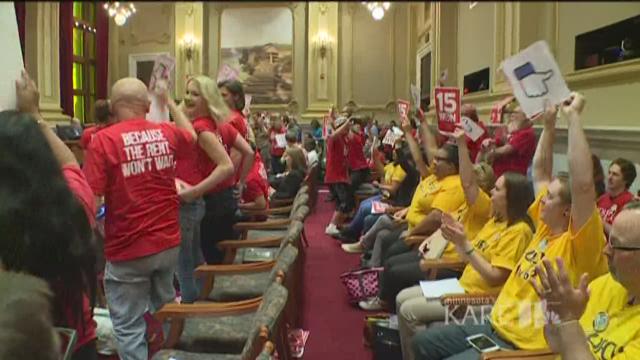 MINNEAPOLIS - With a near unanimous vote, the Minneapolis City Council has adopted a $15 per hour minimum wage.

The vote of 11-1 means all employers in the city will need to raise their minimum wage to $15, gradually over the next several years.

"A lot of people called us nuts, bizarre, dreaming, even crazy, but look at us today," said fast food worker, Guillermo Lindsey, after the ordinance was passed.

"For 71,000 workers, this is a new day and a new opportunity. This is a day to be celebrated and I'm glad we're here," Mayor Betsy Hodges said.

The lone city council member to vote against the measure, Blong Yang, said his main concern is with small businesses and whether they'd be able to stay afloat with such a large portion of their revenue going to wages.

"What I'm concerned about are small businesses, independent businesses, minority and immigrant-owned businesses, and their ability to sustain $15 an hour," he said.

Several restaurants were also concerned by the city's proposal, saying a larger wage without including tips will force them to increase prices and potentially cut staff.

The new ordinance adopted Friday does not include tip credit.

Jennifer Schellenberg, a Minneapolis resident and bartender at Red Rabbit, issued a statement in response to the council's move.

"The city council has failed tipped restaurant workers in Minneapolis. We took the time to advocate for a solution that would empower all workers in Minneapolis. Instead of listening to our concerns, the council moved forward with a proposal that will put our income and our jobs in jeopardy. We won't give up the fight but we remain disillusioned about how our concerns were dismissed for the sake of campaign politics."

The Minnesota Restaurant Association conducted a survey earlier this month that found that tipped restaurant employees in Minneapolis average $28.56 an hour based on their hourly wages and tips. The survey also showed that cooks average $13.89 an hour.

However, workers without tipped wages, welcomed the change. Lindsey, who is paid $10/hour at McDonald's, said in a released statement:

"Fifteen an hour has officially arrived in the heartland! It wasn’t easy, but after years of going on strike, taking to the streets and raising our voices for higher wages, we have finally won the raise we need. Getting paid $15/hour will help us pay for groceries, make the rent, and cover the basics without relying on public assistance. We’re proud that Minneapolis is the first city in the Midwest to pass $15/hour, but we promise it won’t be the last. This movement has momentum that can’t be stopped, and we’ll keep on standing up and speaking out until everyone, everywhere is paid at least $15/hour and has the right to join a union."