The bill includes a $216 million grant program for businesses such as bars and restaurants, and a 13-week extension on unemployment insurance for jobless workers. 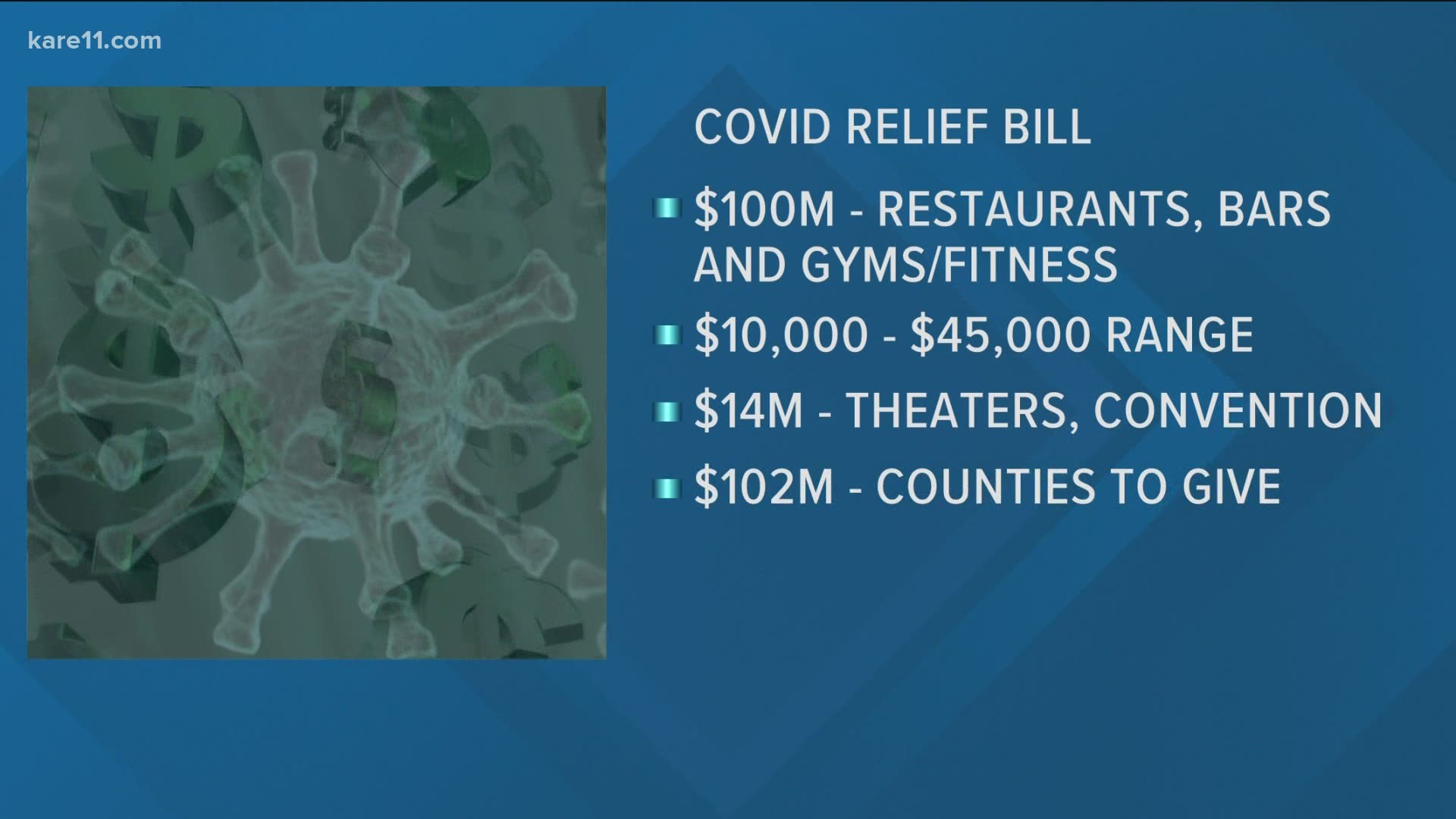 MINNEAPOLIS — A COVID-19 relief package is headed to Gov. Tim Walz's desk after the measure cleared both the Minnesota Senate and House Monday by overwhelming majorities.

The package of coronavirus relief measures is aimed at businesses and workers who took the biggest hit from a four-week “pause” ordered by Gov. Walz last month.

The Senate voted 62-4 to approve the bill and send it to the House, which then passed it later Monday night by a 117-13 vote. The bill now goes to the governor for his signature.

The $216 million bill includes three "buckets" of grant money, and a 13-week extension on unemployment insurance for jobless workers. It will be distributed as follows:

The unemployment benefits will only kick in if Congress fails to act before federal jobless benefits expire Dec. 26.

“Although we are hoping the federal government will take the kind of action they need to and provide the kind of substantial relief that Minnesotans need, we’re stepping in at this moment to provide a package that will help workers and businesses and families,” House Speaker Melissa Hortman (DFL-Brooklyn Park) said at a pre-session news conference.

Walz plans to announce Wednesday whether he'll extend the “pause” past Friday, December 18.

While the relief bill enjoyed broad bipartisan support in both chambers, the floor debates turned into a forum on the governor's use of his emergency powers. Republicans asserted that all of the affected businesses would be better off if Walz simply removed most restrictions on restaurants and bars and trusted them to regulate the spread of coronavirus.

“Retail stores are packed now for the holidays. There’s a lot of commerce going on and a lot of folks are just going nuts by sitting on the sideline by not being able to participate with that. And it’s causing a lot of heartburn and concern. … Today’s a good day for business relief," said Rep. Dave Baker (R-Willmar) at a Monday morning news conference.

The Governor has said he's trying to balance the needs of small businesses on main streets across the state with the need to contain the spread of COVID. Family gatherings, bars and restaurants have been trouble spots for transmission of the virus, according to the top disease experts at the Minnesota Department of Health.

The GOP-controlled Senate once again passed a resolution that would end the governor's special emergency powers.  A similar measure failed in the DFL-controlled Minnesota House early Tuesday morning, after an impassioned debate.

Nearly 160 businesses have signed a pledge on Facebook to defy the governor's order if he extends the restaurant and bar restrictions past Dec. 18. The administration is also facing a lawsuit by a group of high school athletes and parents who want to see youth sports resume.