Mike Schultz's rise to the top of the Para-snowboarding world is a fascinating one. 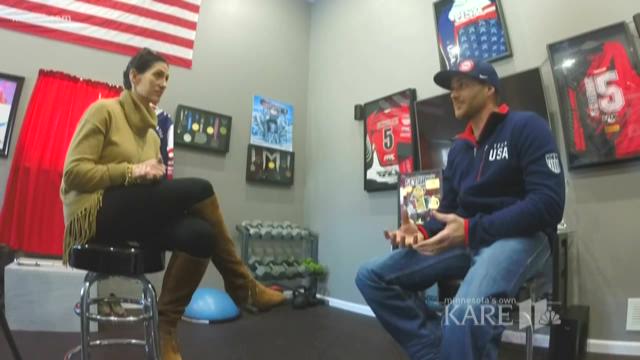 ST. CLOUD, Minn. - Minnesota has three athletes that will represent Team USA at the Paralympics in Pyeongchang, South Korea.

One of them is St. Cloud’s Mike Schultz. Schultz’s rise to the top of the Para-snowboarding world is a fascinating one.

We sat down with him before he left for the games.

“This dream has been in my sights for almost four years now,” Mike says with excited anticipation.

The reality of the games has finally set in. Not that he’s nervous. With as many medals as Mike Schultz has won, you’d think he was born on a snowboard.

“It was a steep learning curve because I didn’t learn snowboarding until after I become an amputee,” he says.

In 2008, the profession motocross and snowcross racer suffered a severe injury after he was thrown from his snowmobile. The accident caused a compound fracture of his knee.

“At no point did I think I was going to lose my leg over it. I knew it was bad, extremely bad, and after a couple of days in the hospital, surgery after surgery, we realized that kind of the only option for me to move forward was for me to amputate my leg,” Mike explains.

He and his wife Sara had only been married a year. It was a tough time for the young couple who didn’t know what would happen next. A new normal. And, if you know Mike, you know that just wasn’t going to do.

“I set out to build my own leg. I call it the moto-knee. It uses a mountain bike shock in it,” he says.

Yep, Mike built his own leg and foot and started racing again.

“I went to the X Games seven months after my injury on a leg I created in my garage and I won a silver medal. And, that moment there was so powerful. There was so much that needed to happen for me to get there,” he recalls.

As the medals stacked up, Mike noticed something. The other athletes didn’t have the same kind of equipment, so he started a company called Biodapt, making legs and feet for his competitors.

“The feedback that I get when I’m working with an amputee that tires it for the first time, and has that moment where he’s like, “I can ride again, and I can ride well,” and just seeing that excitement and happiness is priceless. It’s just so motivating for me and rewarding, and you know, to me that is worth more than winning medals,” says Mike.

Ah, but competitive nature called, and so did the USA Paralympic Snowboarding team. So, Mike got on a board just four years ago. There have been ups and downs, but let’s just say, he’s peaking at the right time.

“I ended up winning both the championships in Boarder Cross and Banked Slalom. I’m ranked number one in the world for both of them, so yeah, this year is going good,” he says almost sheepishly.

He plans to ride that wave of success into the Winter Games, but what about all the other athletes from around the world using the equipment he developed? Mike Schultz isn’t too worried.

“I really enjoy helping these other athletes and trying to give them the tools to perform the best they possibly can, and then I’m competing against them, so it’s a catch 22. So, I’m like do I want to give them all my secrets? Um, no. I’ve always got a little secret of my own on my own equipment,” he laughs.

We don’t want to jinx anything, but let’s just say a guy who’s name rhymes with Bike Boltz, is an odds-on favorite to stand on the podium more than once.

“My goal is to get there and perform, be focused 100 percent, and be able to put down my best race runs up to this point, and if I do that, the medals will come. If I come home without a medal? No, I won’t be satisfied at all. I might have to do this journey for another four years. I don’t know,” he says.

Well, let’s just take this one race at a time. And, if having a cool nickname helps…

“My real nickname has always been Monster, but this year with the red, white and blue leg, my team calls me Captain America. I’ll take it. I’ll take,” Mike laughs again.

Go get ‘em Captain America. The whole state of Minnesota is cheering for you.

Side note: Mike’s teammates chose him to carry the American flag for the opening ceremony of the games. He says he’s both excited and honored.