Despite a series of heart surgeries as an infant, Ali Fish pulled off an impressive feat to help families in need. 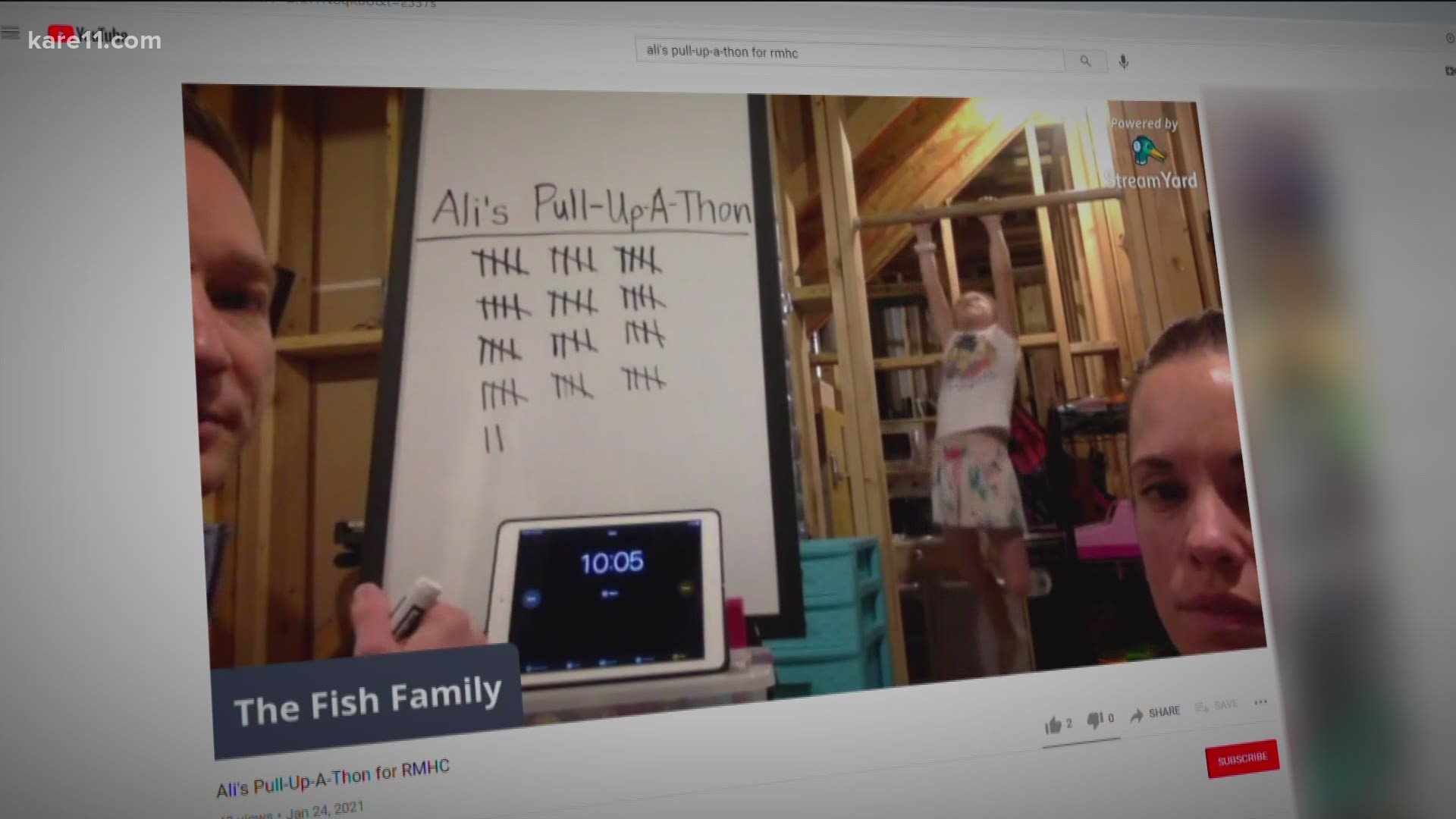 MINNEAPOLIS — Identical twins Ali and Lucy Fish, love playing together, but the 7-year-old girls don't share a common love for pull-ups. When Ali recently came up with an idea to see how many pull-ups she could pull off in an hour, Lucy was happy to cheer her on from the sideline.

Last week, Ali, with the help of her parents, Brian and Heidi Fish, pulled off her feat of strength. She live streamed her "Pull-Up-A-Thon" and racked up 83 pull-ups in an hour, and raised some serious money for charity in the process.

"I wanted to help families in need," Ali said.

After days of collecting donations and pledges, Ali raised nearly $84 per pull up, for a grand total of $7,000, which she decided to donate to the Ronald McDonald House in Minneapolis.

"It makes me very proud that she is aware of, at such a young age, that there are people outside of her that she can help," said Heidi Fish. "I think that she somehow, subconsciously, knows that she's been on the receiving end of that."

"We really believe that she is strong because of what she has gone through," Brian said.

The twins were born 11 weeks early due to a complication known as Twin to Twin Transfusion Syndrome. Lucy weighed two pounds, ten ounces, and spent 52 days in the ICU. Ali weighed just one pound, eight ounces, spending 101 days in the NICU.

"We also found out that Ali had congenital heart defects," Heidi said.

"That's where our journey really began," Briand said. "It turned into a series of surgeries over a seven week period where we were literally at a home away from home at the Ronald McDonald House in Milwaukee. She just had to fight and be strong as a very frail, small baby, and I just feel like that has just carried through."

Ali still has a pacemaker, which may be the only thing that kept pace with her during the Pull-Up-A-Thon last week.

"I didn't seem that tired," Ali said. "But I was pretty tired from doing all of them."

One week, and one really big check later, Ali says she feels great.

"We live in a world where we need a little more kindness and a little more love and to see young people involved in that kind of effort," Briand said. "It brings this light in kind of a year that's been challenging."

Ali's donation wasn't' just generous, it was timely. The money went to help stock the pantry at The Ronald McDonald House. Since most hospitals have yet to reopen their cafeterias, the house is now serving families three meals a day, instead of one.

OTHER NEWS: Mavericks goalie is comfortable and confident in net

OTHER NEWS: Coachella, Stagecoach 2021 canceled due to COVID-19