Here are the latest developments on COVID-19 spread and vaccine progress in Minnesota and Wisconsin. 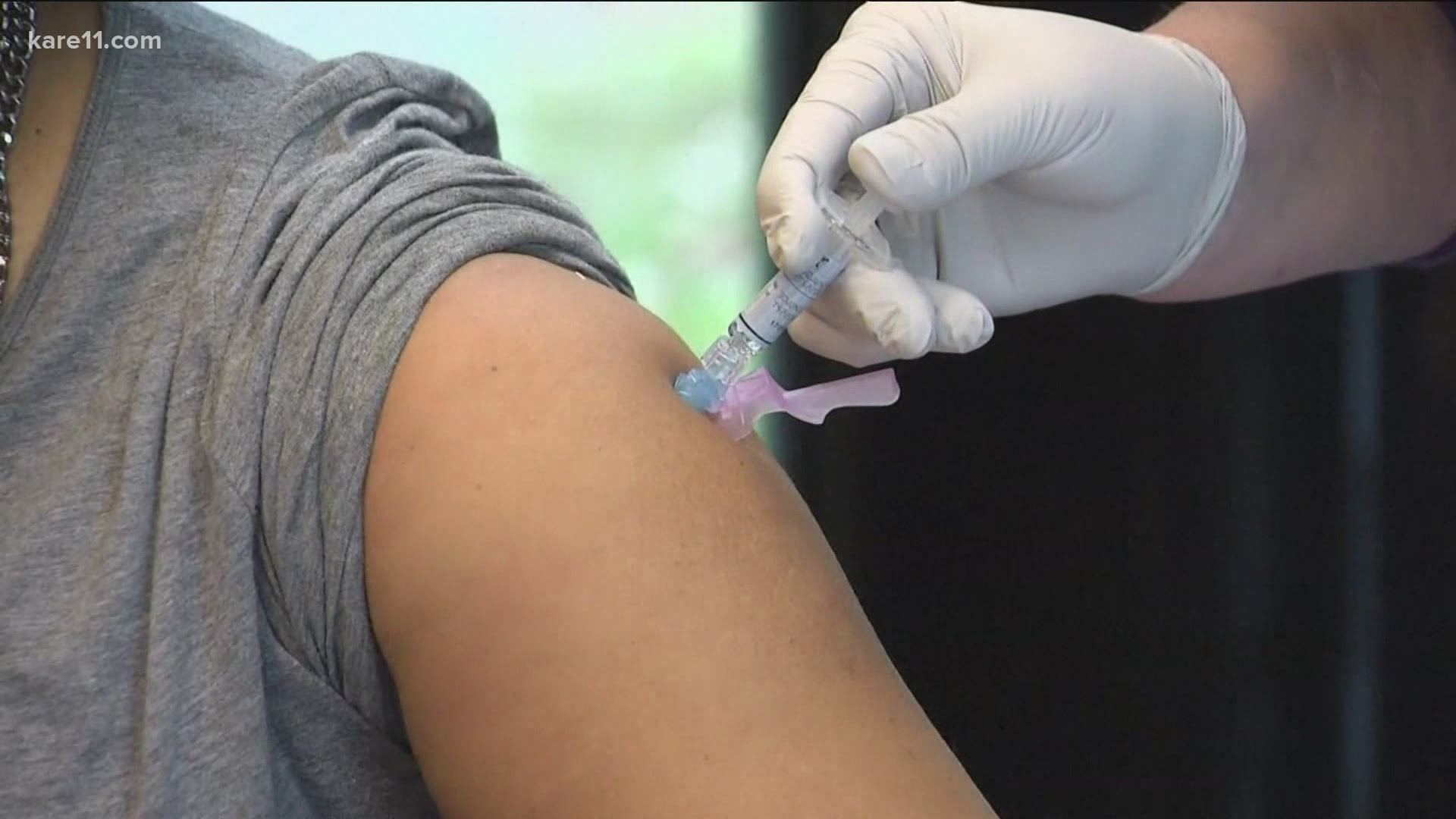 Hospitalizations related to COVID-19 are at a level not seen in the state since mid-January, according to data released Tuesday by the Minnesota Department of Health (MDH).

Reports from hospitals across the state say 676 people are being treated for symptoms of the virus on an in-patient basis, the highest single-day number since Jan. 11 when 692 were hospitalized with COVID. MDH says 159 of the hospitalizations reported Tuesday are being treated in the ICU.

MDH officials have stated in calls with reporters in recent days they believe the increase in hospitalizations is tied to the spread of the B.1.1.7 variant, which spreads more easily and triggers more severe COVID symptoms.

Total hospitalizations have now risen to 28,509, with 5,830 of those patients requiring ICU care. Health officials say 520,800 people who once tested positive for the virus  are healthy enough to no longer require isolation.

The state vaccine dashboard says as of Sunday 2,102,859 Minnesotans have received at least one dose of vaccine, 47.7% of those eligible to be immunized (age 16 and older). MDH says 1,435,224 people have completed their vaccine series, whether one or two shots, and are considered fully vaccinated.

State officials are advising health providers to follow the federally recommended "pause" on use of the Johnson & Johnson COVID-19 vaccine.

Both the U.S. Centers for Disease Control and Prevention (CDC) and Food and Drug Administration urged Tuesday that no J & J vaccines be administered while investigators review data concerning an "extremely rare" blood clot reported by six people who received that vaccine in the U.S.

Minnesota Commissioner of Health Jan Malcolm said Tuesday that until that process is complete, state health officials have advised providers to stop using the Johnson & Johnson vaccine out of "an abundance of caution."

“While this issue appears to be extremely rare, CDC and FDA are acting in a very cautious manner that underscores our commitment to vaccine safety,” Commissioner Malcolm said. “We will be closely monitoring the federal review process and use that information to help guide our efforts here in Minnesota in the days ahead.”

The state says the Johnson & Johnson vaccine represents only 6.6% percent of the total doses Minnesota has received to date, so the pause is not expected to dramatically slow the pace of vaccinations in the state.

While Minnesota officials say they are not aware of any serious side effects occurring among the more than 184,000 Minnesotans who have received this vaccine, anyone who was immunized with the Johnson & Johnson vaccine who develops severe headache, abdominal pain, leg pain, or shortness of breath within three weeks after vaccination should contact their health care provider immediately.

Anyone who currently has an appointment to receive the Johnson & Johnson vaccine is advised to watch for a notification from their provider about canceling, postponing, or rescheduling the appointment.

Vaccination appointments can be found by signing up for the Vaccine Connector, by using the state Vaccine Locator map, or checking with local pharmacies or your health care provider.

Federal officials are recommending Johnson & Johnson's one-dose COVID-19 vaccine be put on "pause" while the cases of at least six women who developed potentially dangerous blood clots are investigated.

The Centers for Disease Control and Prevention and the Food and Drug Administration confirmed the investigation in a joint statement, adding that reduced platelet counts have also been reported after receiving the Johnson & Johnson product.

U.S. federal distribution channels, including mass vaccination sites, will pause the use of the J&J shot and states and other providers are expected to follow. A White House spokesman downplayed the impact of the development on the nationwide vaccination effort.

"This announcement will not have a significant impact on our vaccination plan: Johnson & Johnson vaccine makes up less than 5 percent of the recorded shots in arms in the United States to date," said White House COVID-19 Response Coordinator Jeff Zients in a released statement. "Based on actions taken by the President earlier this year, the United States has secured enough Pfizer and Moderna doses for 300 million Americans. each week, and in fact this week we will make available 28 million doses of these vaccines. This is more than enough supply to continue the current pace of vaccinations of 3 million shots per day, and meet the President’s goal of 200 million shots by his 100th day in office - and continue on to reach every adult who wants to be vaccinated."

RELATED: J&J vaccine supply drops dramatically, how it could affect appointments in Minnesota

The Minnesota Department of Health announced that two community testing sites will close early Monday due to a curfew in the metro counties.

The Minneapolis/St. Paul Airport and Brooklyn Park/Starlite Center will close their testing sites at 5:30 p.m. to allow people to make it home before the 7 p.m. curfew. The restriction was put in place in Hennepin, Ramsey, Dakota and Anoka counties in anticipation of civil unrest after a Brooklyn Center police officer shot and killed a 20-year-old Black man, Daunte Wright.

Anyone who had an appointment scheduled after 5:30 p.m. will get a notification of the cancellation. They are encouraged to find another appointment, or to order an at-home test.

State health officials recorded 1,994 new infections in the last day, bringing total COVID cases to 544,046 since the start of the pandemic. The new cases were based on results from 24,001 tests (20,925 PCR, 3,076 antigen) processed in private and state labs. Health officials consider a positive PCR tests a confirmed COVID case, while a positive antigen test is considered probable.

Hospitalizations related to COVID continue to increase at an alarming rate, with 651 people being treated on an in-patient basis as of Sunday. Of those patients 161 are being cared for in ICU. MDH officials said last week they believe the increase in hospitalizations is due to the increasing presence of the B.1.1.7 variant, which has a higher rate of spread and results in more serious illness.

Total hospitalizations are now up to 28,255 since the virus arrived in Minnesota, with 5,781 people requiring treatment in ICU.

Two more deaths from COVID have been reported in the past day, bringing fatalities to 6,959. Of those deaths 4,319, or 62% of them are tied to long-term care or assisted living settings.

The most recent data displayed on the state vaccine dashboard indicates 2,084,627 Minnesotans have now received at least one dose of vaccine as of Saturday, 47.3% of the state's eligible population (ages 16 and up). Of that number, 1,420,318 have completed their COVID-19 series and are considered fully vaccinated (32.2%).