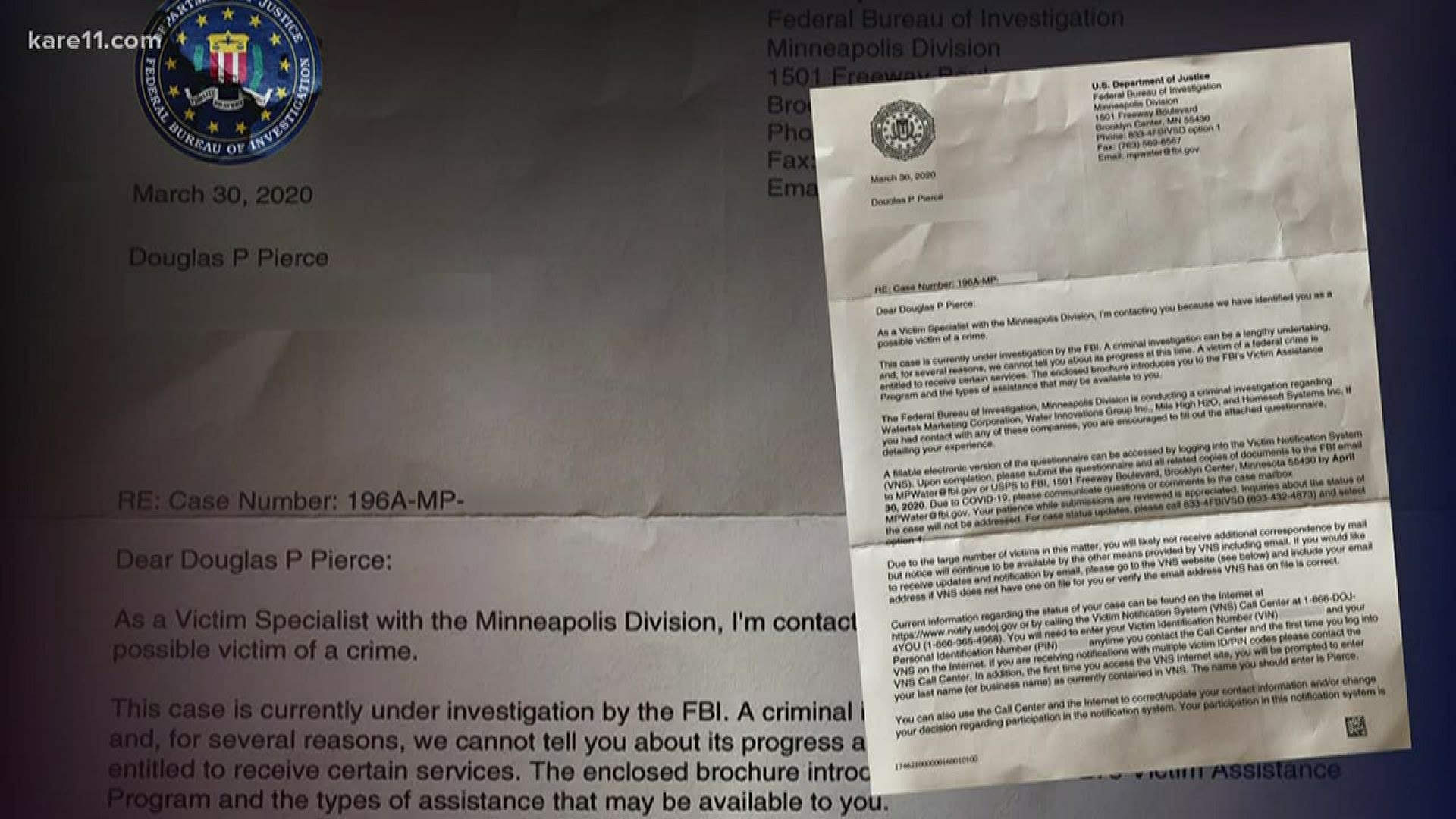 Last September, KARE 11 reported that unhappy customers from across the country claimed that Watertek and two other companies Fields created – Water Innovations Group and Mile High H2O – convinced each of them to pay thousands of dollars for home water treatment equipment that never arrived.

Getting that equipment was supposed to be the key to landing lucrative sales jobs.

But people from coast to coast complained the companies had failed to deliver the expensive water equipment – or the promised jobs.

Records show the companies continued to advertise sales positions – and accept money for the water treatment units – long after the complaints began.

In the wake of those complaints, KARE 11 has confirmed that FBI agents executed a search warrant on the home where Fields lived in Blaine.

In addition, the FBI has sent letters to victims saying they are “conducting a criminal investigation” of Watertek, Water Innovations and Mile High H20.

So far, no charges have been filed against Fields or the companies.

It all started with a job offer on Craigslist.

The ad promised a “$5k Monthly Base” plus “HUGE commissions” to sell a revolutionary water system.

”There was a $5,000 guaranteed salary a month,” said Jerry Cibley of Boston.

The company behind the ad Cibley saw last year – Mile High H2O – claimed to be acting as a distributor for K8 home water ionizing units produced by a Japanese-based company. The company touts the benefits of so-called Kangen Water. They say the ionized water is supposed to be better for you.

The only catch?  To sell the K8 machines, Mile High H2O said you needed to send them nearly $5,000 to get one.

So, last October Cibley sent a $4,980 check to Mile High H20. His contract with the company called it a “deposit” that would be refunded if the K8 unit was returned.

“I said, ‘Is it going to be put in an escrow account?’” Cibley recalled. “Absolutely!” Cibley says the company representative answered. “And we guarantee your money is safe.”

But Cibley told KARE 11 he never received a K8 unit.

And what about that promised monthly salary?  “Never received a penny,” Cibley said.

KARE 11 had already heard similar complaints from people across the country.

A month before Cibley sent in his money, a KARE 11 investigation documented how people from California to Florida claimed they had been taken in by similar Craigslist ads.

“How long did it take to get your water machine?” KARE 11 asked David Maddox of Nevada.

“Did you ever receive the machine?” KARE 11 asked Jay Brooks of California. “No,” he said.

"Never,” said Kevin Molway of Missouri. “I never got the machine.”

Time after time, people told KARE 11 they paid thousands of dollars for K8 machines that never arrived. And neither did the promised sales jobs.

Fields declined to be interviewed. In an email before KARE 11’s original report in September, Fields said he was "making progress towards taking care of all of the parties that we owe anything to."

Watertek: You must get a K8

People like David Maddox heard the company’s sales pitch. Records show he signed a contract with Watertek to sell K8 machines in February 2018.

The agreement required Maddox to pay several thousand dollars as a “deposit” to get a K8 unit.

“If you want to be a successful, a high-level successful distributor, it is a must that you get a K8,” a Watertek representative explained in a recording.

But on September 7, 2018, Watertek sent an email to its distributors announcing a decision to “temporarily suspend the Master Distributor program effective immediately.”

Credit: KARE 11
Watertek said in order to sell the water machines you need to buy one.

Maddox had been waiting six months for his K8 machine, but says he never received it. The lucrative sales position he had hoped for never materialized either.

“To pretty much get your dreams shattered, it was devastating to me.” Maddox said.

Water Innovations also claimed to be recruiting people to sell the K8 machines. Its contracts were nearly identical to Watertek’s, requiring new sales people to pay nearly $5,000 upfront for one of the K8 units.

In a voice message recruiting new sales representatives, a company representative can be heard assuring people: “We’re not like some, you know, company in a garage that just created a website and said, ‘Hey, send us money.’ That’s not what it is.”

In Nevada, Val Pedroza says he saw a Craigslist ad and signed up with Water Innovations.

Credit: KARE 11
Val Pedroza didn't know about complaints about Watertek when he signed up with Water Innovations.

“And it just kept going on to the point where I said, well okay, I’m going to have to request my money back, I’m done,” Pedroza told KARE 11.

And what about those promised refunds from money supposedly held in escrow?

Pedroza is one of more than two dozen people from across the country who told KARE 11 last September they hadn’t been able to get refunds either.

Even so, KARE 11 found evidence that the sales pitches continued – this time under another new name.

In Florida, a stay-at-home mom sent the company $5,000 a few months later, hoping she could make some money after her husband was injured at work.

When she couldn’t get a machine – or a refund – she says she decided to contact Enagic, the company that makes the K-8 water ionizer machine.

“Did Enagic say that these were legitimate companies?” Raguse asked.

“Unfortunately, Enagic told me that Mile High H20 were scammers. And I needed to report everything to the FBI,” she said.

In an email last July, Enagic told KARE 11 they had “terminated” the companies after discovering “unscrupulous and unauthorized business activities.”

Despite Enagic’s statement in July 2019 that it had cut ties with Mile High H2O, Jerry Cibley learned the hard way it was still taking money in October 2019 when he signed up to sell K8 machines.

“My money was deposited into an account, Mile High H2O Corporation controlled by Charles Fields,” he said.

Cibley provided KARE 11 with a copy of his cancelled check deposited in an account at Village Bank in St. Francis, Minnesota linked to Fields.

When he didn’t get a K8 machine either, Cibley began searching for news stories about the company.

Cibley says after he discovered KARE 11’s investigation about Watertek and Charles Fields, he decided to contact the FBI.Other people tell KARE 11 they also made reports to law enforcement.

Now, the FBI is investigating.

KARE 11 has learned that FBI agents executed a search warrant at Charles Fields’ home in Blaine on February 14. The warrant was sealed and authorities have not made any arrests.

In late March, the FBI sent letters to victims asking them for additional information. The letters stated the FBI's Minneapolis office was conducting "a criminal investigation."

“I hope they throw the book at him,” said Doug Pierce of Kansas City.

Some victims tell KARE 11 they eventually received refunds. But others – including Pierce - are still waiting. And the impact on families goes far beyond just money.

Pierce says he thought the promised sales job – with its guaranteed salary and an opportunity for additional commissions – would help pay doctor bills for his son who had a brain tumor.

Out money – and lost time – Pierce said he was so angry he also contacted the FBI, too.

“I just want my money back. I just want it over, done, and just put it so far in the past like it never happened,” he said.

After learning about the FBI investigation, KARE 11 reached out to Charles Fields again asking for comment. He has not responded.

Authorities warn that people should always beware of companies that ask for upfront payments just to get a job.

For other tips on how to protect yourself, check out this brochure about Work-At-Home Scams from the Minnesota Attorney General’s office – and this warning and informational video about Job Scams from the Federal Trade Commission.

Our investigation started after a tip from a whistleblower.  If you have a suggestion, or want to blow the whistle on government fraud, waste, or corruption, email us at: investigations@kare11.com