While a $1M lottery isn't likely, a free fishing license or state parks pass could be in the works. 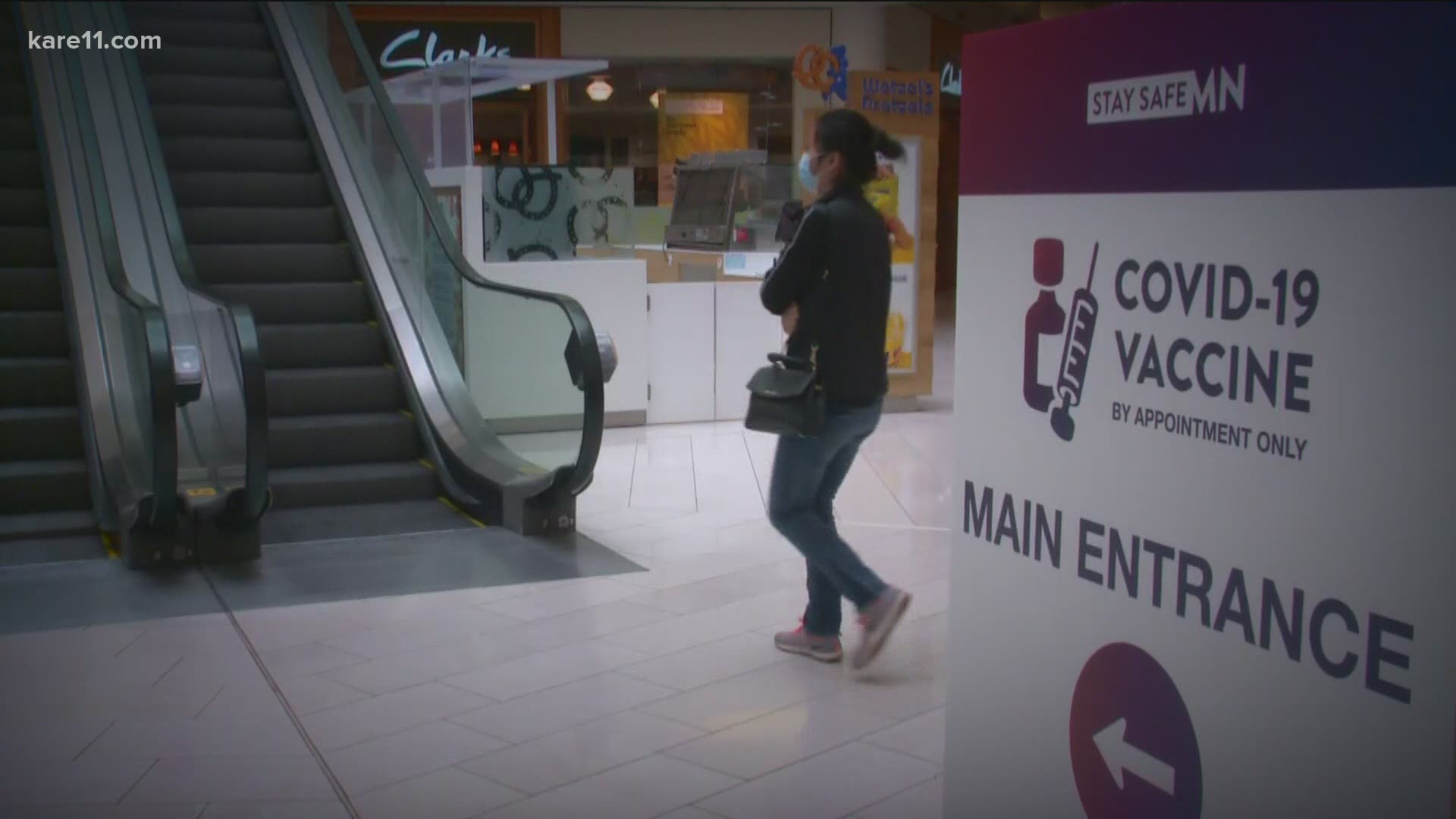 MINNEAPOLIS — If you're planning a trip to the Mall of America, state leaders hope you'll consider getting a shot while you shop.

"We're trying to tell folks, bring your children in, bring a neighbor in, bring friends in," said Gov. Tim Walz, during an event at the state's temporary COVID-19 vaccination site inside the Mall of America.

Though the event was meant to kick off the new "Roll Up Your Sleeves Minnesota Families" outreach campaign, which is focused on 12- to 15-year-old vaccinations, the governor spent Wednesday afternoon trying to sell all Minnesotans on the vaccine.

Vaccination rates among Minnesota adults have been on the decline, so Gov. Tim Walz says he's now thinking about sweetening the deal in a variety of ways.

"A gift card to go shopping after you get done," Walz said, discussing the ideas being considered. "It would be easier to bring your teen down here if they could go right into the mall and do something."

The concept of incentives is one that Dr. Beth Thielen, who specializes in Infectious Disease at the University of Minnesota Medical School.

"What we know from behavioral science is that people respond to little nudges in their behavior to kind of push the dial one way or the other," Dr. Thielen said.

As a researcher, Dr. Thielen says small incentives are common to help boost enroll in medical studies, but last week the state of Ohio changed the game. Governor Mike DeWine announced 'Vax-A-Million', a statewide lottery for anyone who received at least one COVID vaccine dose. Vaccinated residents can enter to win one of five drawings each worth one million dollars.

Though some have criticized the concept, arguing that federal COVID-19 relief money could have been spent differently, the state says that vaccine sign ups hit a three week high after the announcement.

"It can certainly motivate people, but my personal preference is I would like to see something a little more for everyone," Dr. Thielen said.

For example, she says she's encouraged by recent public/private partnerships, like a promotion offered by the St. Paul Saints that offered vaccines and free game tickets for fans. Lake Monster Brewing also offered a free beer and a shot promotion last week.

"To me, bringing vaccinations to the people and making it as easy as possible, is something that particularly comes to mind," Dr. Thielen said.

"I've said from the beginning, that for a lot of folks, this isn't about anti-science or anti-vaccination," Governor Walz said. "It's being super busy and it's about not having the ability to get right there."

Walz says employers, such as meat processing plants that offered vaccines on-site earlier this spring, have seen much higher participation rates. He says the state is trying to work with businesses to expand those offerings, while also getting creative with bigger incentives.

"We are really looking at it," Walz said. "Some of them are clever, I mean, we want people to be excited again about fishing licenses, which are at an all time high, state parks (passes). I've even seen where some colleges banded together and they're giving a free ride to one of their students."

Dr. Thielen says the idea is to focus on motivations over mandates.

"I think kind of working towards a space where it becomes something people want to do rather than are being forced to do, will be, in the long run, a much more effective strategy," she said.