The charges allege the eight officers were barred by supervisors from guarding or even being on the same floor as Derek Chauvin when he was booked into the jail. 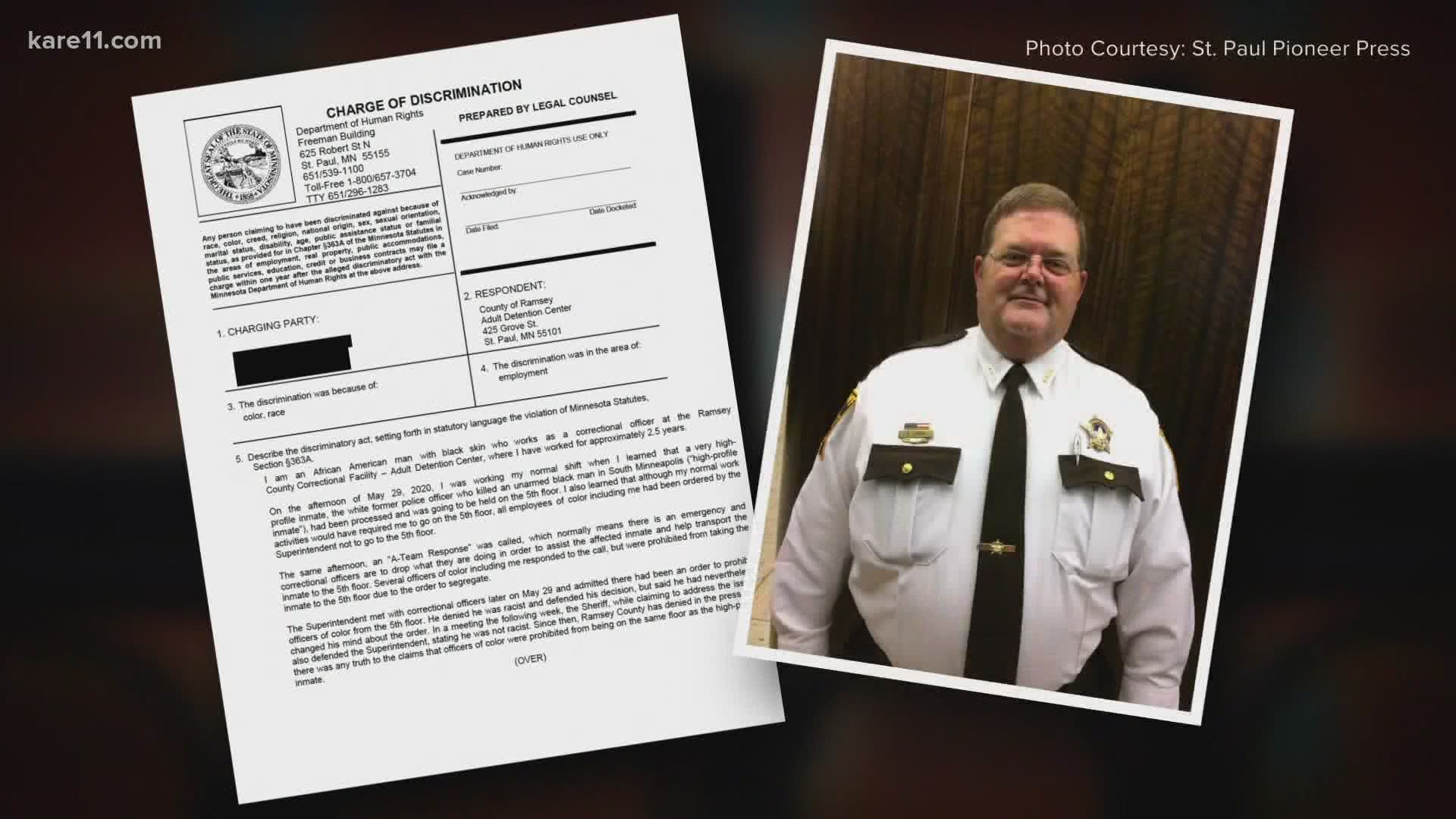 The charges allege the eight officers were barred by supervisors from guarding or even being on the same floor as Derek Chauvin when he was booked into the jail they worked at on May 29. They claim their supervisor did this solely because of the color of their skin.

KARE 11 has obtained copies of the charges, filed Friday by attorney Bonnie Smith, who is representing all eight correctional officers.

In the charges, officers detail their accounts of the orders to "segregate" from white correctional officers because they could not be trusted to carry out their responsibilities professionally around a high profile inmate because of the color of their skin.

According to Smith, in one instance, one of the correctional officers of color was patting Chauvin down during the booking process when he was allegedly told by the superintendent not to escort Chauvin any further, which the officer found odd.

When the officer raised concern up the chain of command, he was allegedly told by the superintendent that because he and the other officers were people of color, they were a "liability" being anywhere near Chauvin, according to Smith.

In one of the charges, an officer says he and other officers of color "were, and continue to be, deeply humiliated, distressed, and negatively impacted by the segregation order. The order and Ramsey County's failure to adequately address it has caused a hostile work environment for officers of color at the Ramsey County Correctional Facility - Adult Detention Unit."

"The employees affected by the order were hurt and upset that jail leadership did not trust them because of their skin color. These employees are highly trained professionals, whose job it is to keep each other safe, the inmates safe and the jail safe," Smith said in a press conference Sunday.

The Ramsey County Sheriff's office now acknowledges the segregation. But earlier this month, the news company Reuters ran a "fact check" of a report making the claims now proven to be true. And a sheriff's spokesperson denied it.

"There is no truth to the report," the Ramsey County Sheriff's spokesperson said to Reuters, adding a claim that black corrections officers were in fact "assigned to guard him as part of the regular routine."

According to Smith, the officers who filed complaints are African-American, Hispanic and Pacific-Islander-American.

Chris Hrapsky spoke with Smith briefly on the phone Saturday night. She told him, "we've chosen to file with the Department of Human Rights, because we think they are the best venue to seek justice and accountability for my clients. It doesn't foreclose a lawsuit in the future."

Smith says the complaints will soon be served to Ramsey County and will automatically trigger an investigation by the Minnesota Department of Human Rights, which is already doing a sweeping investigation into the Minneapolis Police Department over the death of George Floyd.

On Saturday, May 30th, 2020, Sheriff Fletcher received a verbal complaint from a union steward and a meeting was arranged for Thursday, June 4th at 2 p.m. after the riots had subsided.

On June 4th, Sheriff Bob Fletcher, Chief Deputy Dave Metusalem, Undersheriff Bill Finney, and Commander Suwana Kirkland met with Correctional Officers to hear their concerns.  At the meeting, it was alleged that some staff members, working in the Detention Center during Chauvin’s booking, later determined to be three, were reassigned to different posts within the facility for 45 minutes.  Following the meeting, Chief Deputy Metusalem conducted an investigation into the concerns.  The investigation determined the following:

On Friday, May 29th, Superintendent Steve Lydon was notified that the Bureau of Criminal Apprehension would be arriving to the Ramsey County Jail in the next 10 minutes and the Sheriff’s Office was to book and hold inmate Derek Chauvin. It is important to note that at the time, the Twin Cities had experienced three nights of rioting and chaos was taking place on the streets of Minneapolis and St. Paul.  Our staff were on alert to the possibility of mass arrests and community tensions were at unprecedented levels.

As a part of the investigation, Superintendent Lydon stated:

“Recognizing that the murder of George Floyd was likely to create particularly acute racialized trauma, I felt I had an immediate duty to protect and support employees who may have been traumatized and may have heightened ongoing trauma by having to deal with Chauvin. Out of care and concern, and without the comfort of time, I made the decision to limit exposure to employees of color to a murder suspect who could potentially aggravate those feelings.  Shortly after making the decision, Corrections staff expressed concern with the change and within 45 minutes I realized my error and reversed the order.  I then met with the individuals that were working at the time and explained to them what my thought process was at the time and assured them that the decision was made out of concern for them and was in no way related to a concern regarding their professionalism or Chauvin’s safety.  I realized that I had erred in judgement and issued an apology to the affected employees.”

Sheriff Fletcher is reviewing the matter to determine if any additional action is necessary.  It was agreed upon that an additional meeting with Correctional Officers would be held at the conclusion of the investigation.