The board in charge of Minnesota's Capitol complex began work on designing a process for people to formally object to outdoor monuments. 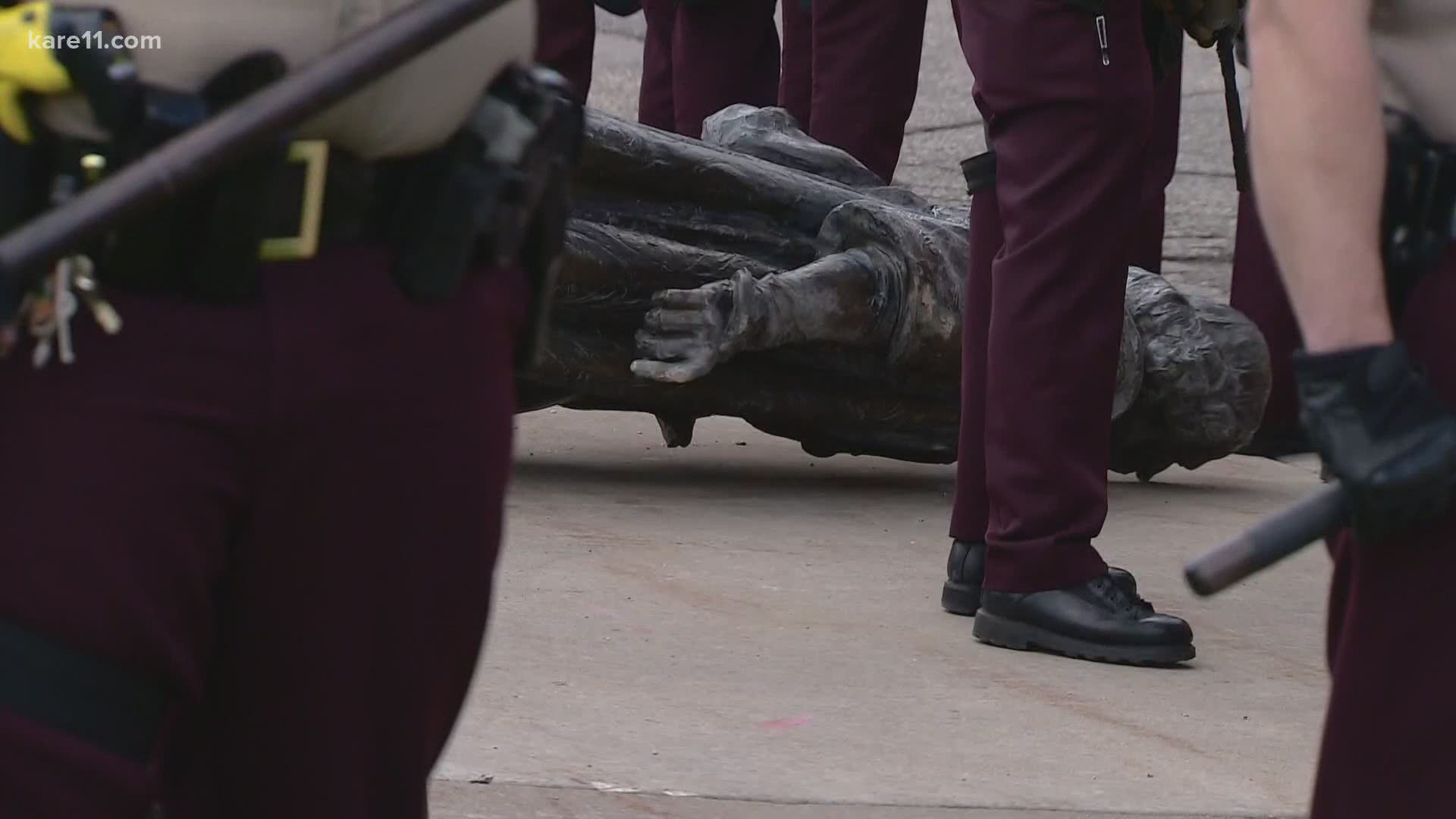 ST PAUL, Minn. — The toppling of the 1931 Christopher Columbus statue sparked a search for new ways for citizens to formally object to monuments on the Minnesota Capitol grounds.

That was the main topic Thursday when the Capitol Area Architectural and Planning Board, or CAAP Board, met for the first time since June 10 when protesters used ropes to pull the bronze likeness of Columbus off its pedestal.

"Folks have been wondering why nobody followed a process. And the honest answer is there is no CAAP Board process for if and how commemorative works on the Capitol Grounds can be removed," Lt. Gov. Peggy Flanagan, the Democrat who chairs the board, told colleagues.

There is a set procedure for lodging complaints about the displays found inside the 1904 architectural marvel, but no real avenue for people to pursue an orderly removal of art outdoors.

"We decided to focus today's agenda on exactly how this board can engage in a conversation that our state is having about representation, is about community and a shared vision of our future together."

The statue is currently being stored in an undisclosed, secure location. The state has received inquiries from people of Italian-American heritage who want to buy it from the Minnesota Historical Society, but that wouldn't happen until the CAAP Board makes a final decision about what to do with the monument.

Lt. Gov. Flanagan, who is a member of the White Earth Nation of Ojibwe, opposes the idea of reinstalling the Columbus statue because of the Italian explorer's destructive impact on the indigenous people of this hemisphere. She has also pointed to writings by Columbus, describing how he sold girls as sex slaves to the men working to colonize the Caribbean islands.

The CAAP Board is comprised of lawmakers from both sides of the aisle, experts and representatives of MNHS, which operates the National Historic Landmark as a museum. There's also a Capitol Preservation Commission that meets once a year, and handled the controversy over paintings that had been in the Governor's Reception Room for many decades.

Essentially, the CAAP Board must sign off on any changes in the Capitol complex with special attention to preservation and aesthetics. Even simple additions, such as special netting to prevent pigeons from roosting in the Capitol's loggia area, had to get the green light from the board.

Most recently, the CAAP Board approved a new statue of civil rights and labor leader Nellie Stone Johnson, which will be installed on the first floor of the Capitol in a prominent location after it is completed.

It will take at least one more meeting to create the process for weighing and ruling on disputed sculptures and statues, including Christopher Columbus. In the meantime, there's a new email address where you can send your ideas to the CAAP Board: caapb.input@state.mn.us

For more about exactly what the board does, you can click on this link to get to the CAAP Board home page.

Many Capitol Republicans are still very unhappy about the fact the Columbus statue was removed, and have blamed the Walz administration for not doing enough to protect the statue. Senate Majority Leader Paul Gazelka announced Thursday that the Senate's special government oversight committee will look into how the situation was handled.

Republicans on the CAAP Board wanted to use Thursday's meeting to sound off on the way the Columbus statue was removed.

"There's a big difference between lawful removal and vandalism and defacing Capitol property," Sen. Carla Nelson of Rochester said, asking that the word "lawfully" be added any new policy on removal of statues and monuments.

Sen. Nelson also criticized Flanagan for not using her role as CAAP Board chair sooner to begin a formal process of removing the Columbus statue. Flanagan became chair when she took office 18 months ago.

"Our current sensibilities and what we know to be true today about inclusiveness today, things we would not tolerate today but were part of our past," Nelson asserted.

"I don't believe we can remove our past by tearing down statues or removing paintings, but we can, and we should reinterpret that history."

Flanagan said much can be learned from the process the Bemidji community went through replacing the statue of Shaynowishkung, the Ojibwe man who settled the area and had become known as "Chief Bemidji" by white Minnesotans.

His descendants and other Native American residents objected to the original wooden 1950s statue as looking too cartoonish. It was replaced in 2015 by a bronze version by Gareth Curtiss, who used old photos of Shaynowishkung to create a lifelike resemblance.

It was a process that too six years, according Minnesota Public Radio News, and it included vigorous debate among local leaders about how the inscriptions would read.

RELATED: Statues toppled, defaced throughout US in anti-racism protests 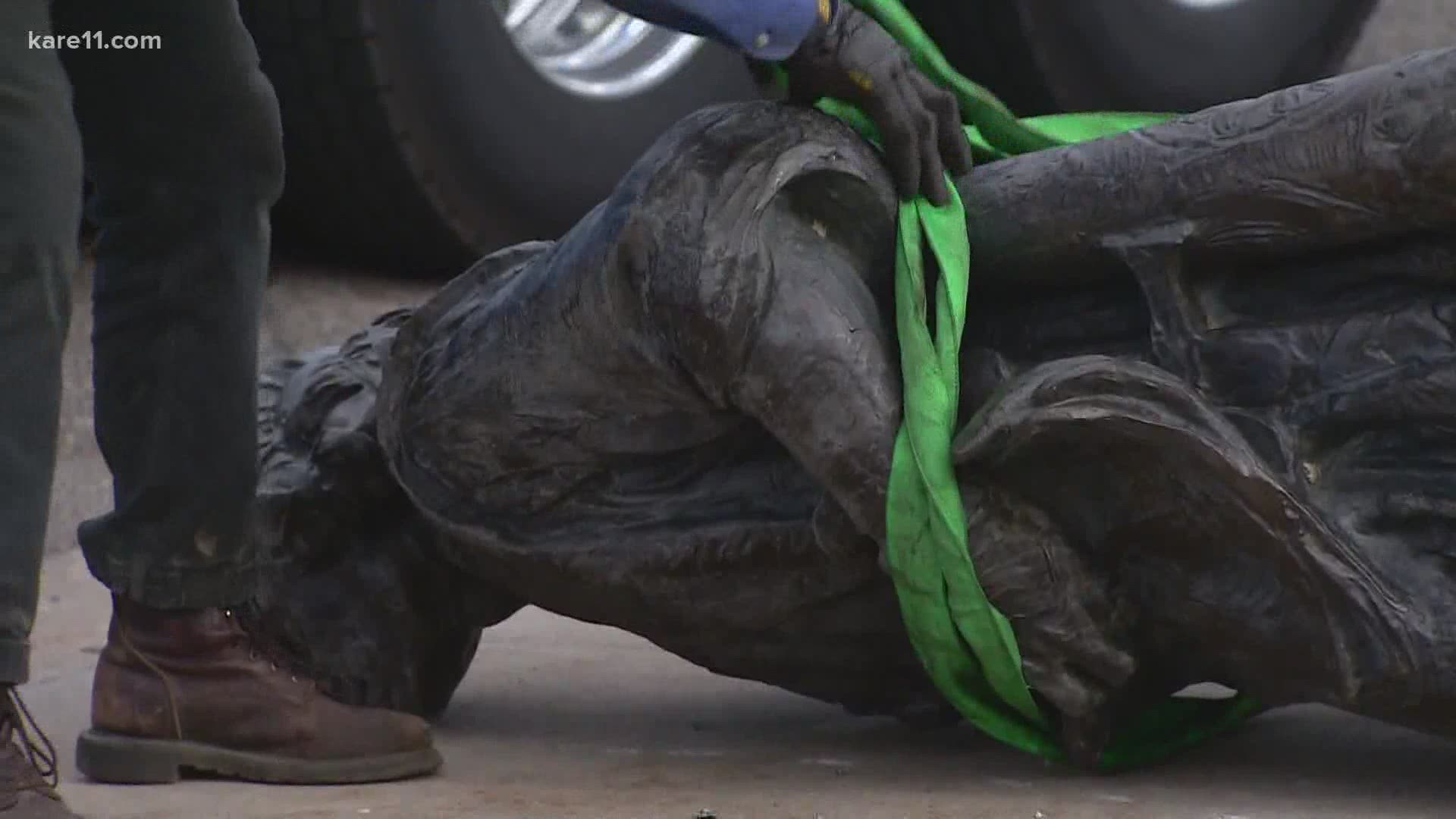