The move was anticipated following reports of threats of violence at all 50 state in the wake of the U.S. Capitol insurgence. 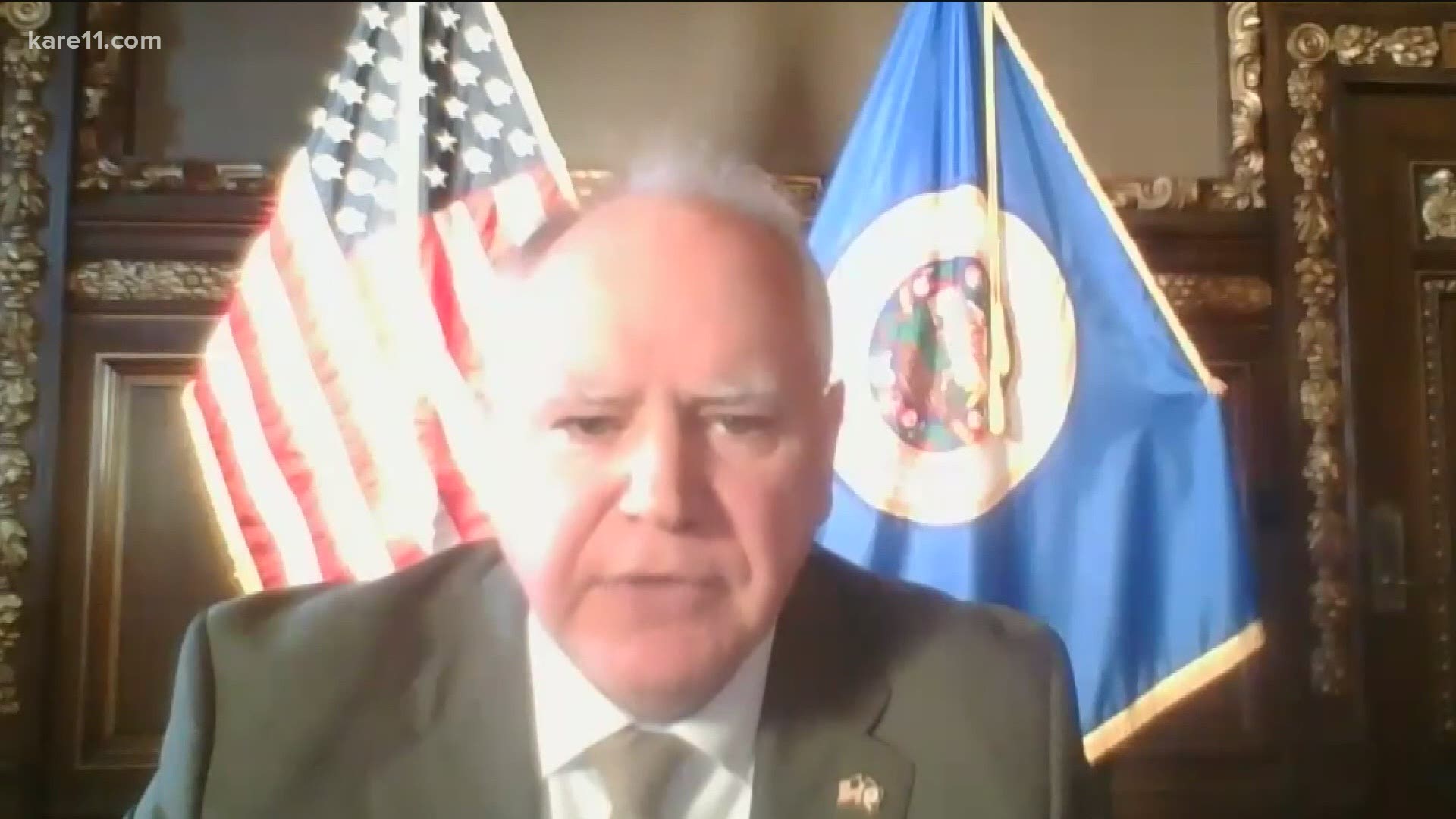 MINNEAPOLIS — Gov. Tim Walz activated the Minnesota National Guard Wednesday to assist state and local law enforcement in providing security at the State Capitol in St. Paul amid reports of armed protests potentially in the works here and across the country.

The Governor's office says National Guard personnel will work in conjunction with state troopers, Minnesota Department of Natural Resources (DNR) conservation officers, and officers from area police departments to "prevent unlawful entry into the building" at (the Capitol) and respond to various threats.

“We will always support Minnesotans’ First Amendment rights to peacefully protest, but anyone involved in violent, illegal activity will be held accountable,” said Governor Walz. “We are tracking reports and monitoring the situation closely to enhance our response and change tactics as needed.”

The governor said on Tuesday there will be an "appropriate presence" around the people's house. He added that a lot of the important work is being done before scheduled protests and rallies, with security professionals monitoring online activity and seeking out credible threats.

KARE 11 news partner MPR is reporting that the FBI says members of a far-right group that wants to foment a second civil war scouted out the State Capitol ahead of a pro-Trump rally planned for this weekend.

A memo to law enforcement from the FBI's Minneapolis field office says that "a few Minnesota-based followers of the Boogaloo movement" identified police sniper locations and said buildings with snipers would "need to be blown up" to protect Boogaloo fighters.

The Dec. 29 memo, first obtained by Yahoo News, says the group did not plot a specific attack, but would use violence if a fight broke out.

A spokesperson for the FBI in Minneapolis says the bureau doesn't comment on its internal discussions, but agents are identifying potential threats and are sharing the information with other agencies.

Fencing is already up around the Capitol grounds, and state troopers and other law enforcement professionals will be deployed to make sure things don't get violent, especially with talk of protestors coming armed.

"You will see a presence of folks protecting folks' First Amendment right to assemble and protest," Walz said.  "I would make the case you've got a pretty weak argument if you've got to bring a gun to do it, but that's some of what it sounds like will happen."

The governor spoke Tuesday as he kicked off a three-day journey across Minnesota this week, to call for residents to embrace a period of reflection, civility and peace in the wake of last week's violent uprising at the U.S. Capitol.

As a nod to his past as a high school history teacher, Walz will visit historic monuments across the state, encouraging Minnesotans to reflect on the "greater context that led to this dark moment in history."

Walz started Tuesday by visiting the Minnesota History Center in St. Paul, saying state and federal authorities are preparing to protect the State Capitol amid reports that violent political insurgents may be planning an attack similar to the one last week in Washington D.C. The governor confirmed he will use his executive powers to activate the National Guard on Wednesday, to help keep the Capitol safe.

Walz says it's not a coincidence he started at the state's largest repository for things from the past. He said he frequently looks down at the History Center from his office at the Capitol, and insisted that "everything we (lawmakers) do up on that hill ends up down here."

Walz encouraged everyone to take in exhibits that run the gamut from the origins of First Avenue and the Minnesota music scene, to the Dakota Indians who were here long before European settlers arrived. He says history is the frame we should look through, and that ignorance of what came before can lead to things like the Capitol insurrection.

The governor's office says during his travels around the state, Walz will urge Minnesotans to reflect on how "divisive rhetoric" has eroded democratic institutions over time, and will call on resident to come together "to restore democracy for all."

During the trip he will meet with reporters at a minimum of three sites:

The announcement of the governor's junket came just hours after he denounced Minnesota Republican leaders for refusing to clearly state that the presidential election was free and fair. The typically laid-back panel discussion on the legislative session, sponsored by Forum Communications, became tense as Gov. Walz reacted to statements from GOP caucus leaders.

The Democratic governor also disclosed that state troopers had to take his crying 14-year-old son to safety last Wednesday during a protest dubbed “Storm the Capitol” at the state capitol , which later shifted to the official governor's residence. That rally, which was peaceful, coincided with the deadly riot at the U.S. Capitol by supporters of President Donald Trump. And it was marked by some of the same sort of incendiary rhetoric as the insurrection in Washington.

The two top Republicans in the Legislature, Senate Majority Leader Paul Gazelka and House Minority Leader Kurt Daudt, both agreed that Joe Biden won the election. And they said they condemn all violence. But they stopped short of declaring that claims that the election was rigged are false.

"It’s my hope that there will be more people listening why people think the election wasn’t fair, why they feel like it was frustrating that the Big Tech companies and some of the media seemed to filter out some of the information," Gazelka told reporters, urging Democrats to try to understand why Trump supporters were so upset.

Walz said he was stunned to hear this rhetoric, this long after Biden was declared the winner and 60 lawsuits alleging fraud were rejected by the courts.

"This denial of the rhetoric that was pushed by the president, continues to be pushed, that there was a fake election to undermine our system, is simply beyond the pale," Walz remarked.

"And all of the talk about finding the common ground; how do we find common ground when we have we have people who will not say the election was fair?"

Minnesota Gov. Walz reacts sharply against the false equivalency GOP leaders are making between attack on US Capitol and last summer’s riots in Minneapolis pic.twitter.com/8DxgumnYr2

And the two Republicans drew equivalences between the riot in Washington and the rioting that followed the police killing of George Floyd in Minneapolis last summer.

"I’m amazed that one side can see nothing but flaws in the other one, and see nothing wrong with what happened on their side," Senate Majority Leader Gazelka told reporters.

Democratic House Speaker Melissa Hortman reminded Daudt that DFL leaders and the governor have roundly condemned the looting and arson that accompanied the protests last summer after Floyd's death. She said that can't be compared to what happened Jan. 6 in the US Capitol

"What we’re talking about is an attack on Democracy. The fundamental tenants of our society are respect for the rule of law, and free and fair elections," Rep. Hortman responded.

"There can be no equivocation that it is at all correct for anybody to turn to violence as a solution to the result of an election they don’t believe in."

Hortman said there will be an investigation into several Republican legislators who attended the "Storm the Capitol" rally staged at the Minnesota Capitol the same day the U.S. Capitol was under attack.

She also urged the crowd to keep resisting the mask mandate and other emergency orders by Governor Walz, pledging, "We are going to fight, we are going to go down, there's going to be casualties. I'll be the first casualty, I do not care."

That's why Walz was upset to hear Republicans defend the legislators for taking part in the Minnesota rally.

"I take real umbrage with the idea that what happened here at our Capitol on Wednesday was okay, because the result of that language, of taking the governor and his family prisoner and 'there may be casualties' resulted in the first time in the State Patrol entering the living quarters and removing my 14-year-old son to a safe location."

The leaders spoke at an annual legislative forum organized by Forum Communications.