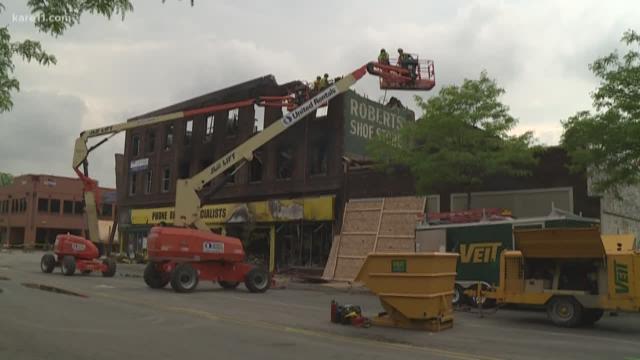 MINNEAPOLIS - Demolition work at the Roberts Shoes building created some collateral damage early Wednesday, when one of the walls collapsed onto the roof of a neighboring nonprofit service agency.

The iconic structure at Lake St. and Chicago Ave. was destroyed by a blaze that began Sunday night. Demolition began Tuesday after the Minneapolis Fire Dept. deemed the structure to be too unsound for investigators to enter.

The Minneapolis office of CLUES, or Comunidades Latinos Unidas En Servicio, was rocked after midnight as a brick wall from the Roberts Building crashed through the roof, showering a classroom with bricks and other construction debris.. pic.twitter.com/jj3wIRktVI

Ruby Azurdia-Lee, the president of CLUES, said it was fortunate nobody was in the building at the time the debris came crashing through. That office will be closed for six weeks, so CLUES will be looking for other spaces to continue services.

"We will try to make sure that our clients are still being served," Azurdia-Lee told KARE. "We have mental health services, financial education classes, English as second language classes, and other services we provide for on behalf of the county."

She said some clients will be directed to the main CLUES headquarters in St. Paul for the time being. People are invited to call 651-379-4200 for more information.

Roberts Shoes, an East Lake Street fixture, closed in 2014 after 77 years in business. Most recently, it's been home to a mix of apartments and businesses including a restaurant, dance studio, clothing store, hair salon and phone repair shop.

At the time of the building was home to a wireless communications store, a hip-hop clothing retailer, and studios for artists and musicians. There was only one full-time resident, the caretaker, who was not at home when the fire started.

The three-alarm fire started around 10:30 p.m. Sunday, and crews spent Monday morning battling the blaze. Everyone inside the building got out safely.

On Wednesday, Minneapolis Fire reported that the cause of the fire is still undetermined. Investigators were not able to get inside because of the danger of collapse.

At 11:00 Wednesday night, only about one fourth of the building had been torn down. Crews were removing the east wall brick by brick, to avoid damaging an adjoining daycare center.