The president tweeted the morning after the city council met to revisit whether or not they'll say the pledge before meetings. 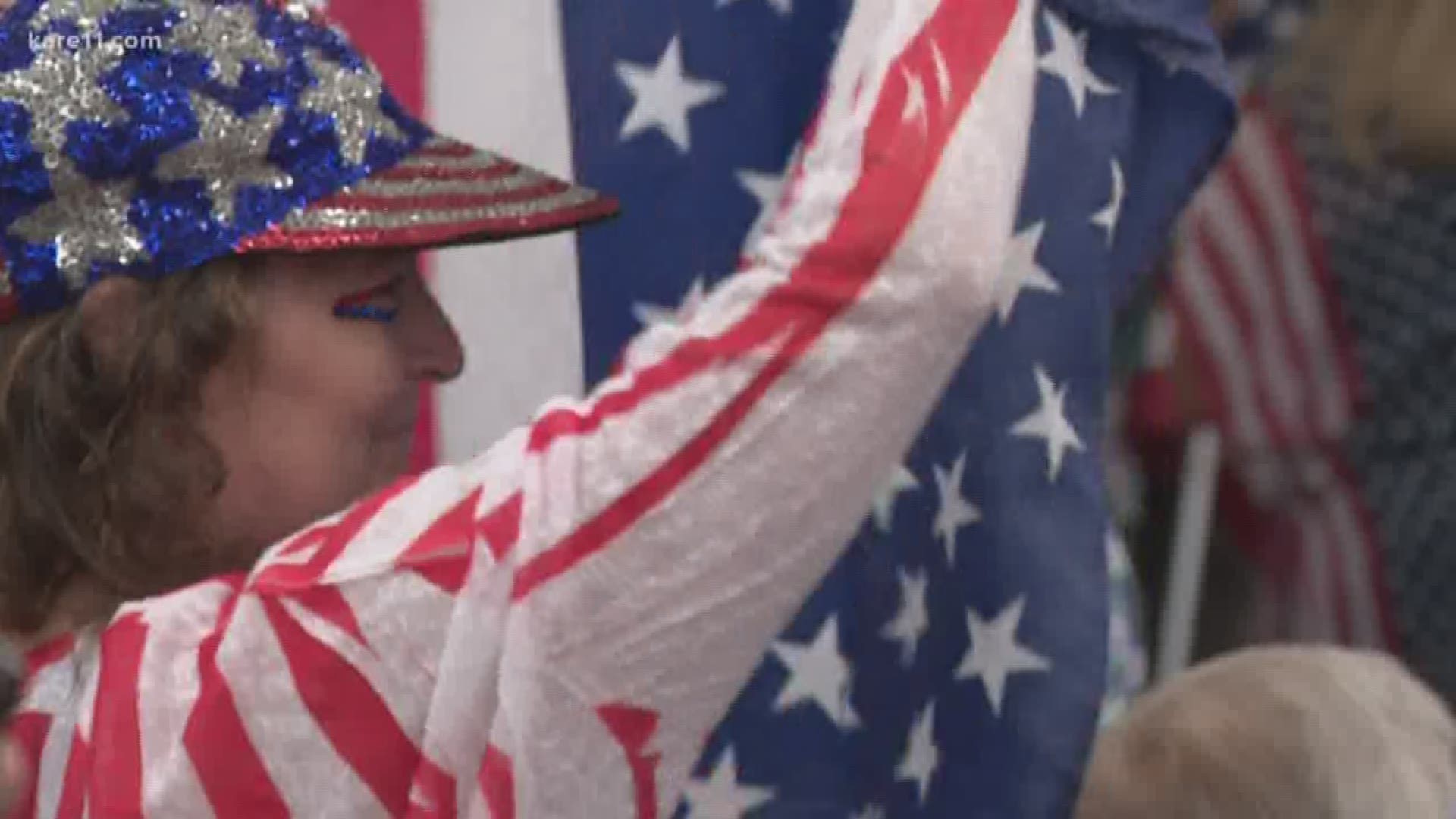 ST. LOUIS PARK, Minn. — President Donald Trump is weighing in on a controversy surrounding the Pledge of Allegiance in St. Louis Park.

On Tuesday morning President Trump tweeted, "Outrage is growing in the Great State of Minnesota where our Patriots are now having to fight for the right to say the Pledge of Allegiance."

His comments come after a Monday study session held in St. Louis Park City Council chambers exploded into confrontation. Protesters were taking aim at council members for voting last month to remove the Pledge of Allegiance from the start of council meetings.

The crowd, which included some military veterans, constituents and the chair of the Minnesota GOP, chanted "USA" and loudly recited the Pledge of Allegiance at least three times during a council discussion that lasted for the better part of an hour.

Although council members took no votes on Monday – it was not a regular board meeting -- they did acknowledge publicly they may have rushed into the decision to remove the pledge and began charting a path to gather community input about the topic. Initially, council members voted for removal because some argued the Pledge of Allegiance could discourage non-citizens from the political process (Anne Mavity, the council member who sponsored the original changes to the meeting protocol, previously told KARE 11 that non-citizens shouldn't have to say a pledge to do business with the city). However, the decision led to some backlash and even national media attention, including the president's tweet.

Mavity said she supports a detailed research process that incorporates feedback from constituents.

“We clearly fumbled by not anticipating the desire of our St. Louis Park residents to be in conversation about this,” Mavity said. “So, I want to make sure we get it right at this time.”

Though council members had some disagreements on Monday about how to move forward with the community input process, they seemed to reach a consensus that they should revisit the decision about the pledge in another study session this month.

Mayor Jake Spano said city staff will now work to find a time for that discussion to take place.

The mayor supports reinstating the pledge but was out of town when the vote occurred in June. On Monday night, he said council members “skipped a step” and should have taken more time to consider the community’s feedback.

“Let’s have a focused discussion (about the pledge),” Spano said in interview. “Whether or not that is in fact welcoming or unwelcoming and what does that mean? And how do we move forward as a group?”

Jennifer Carnahan, the chair of the Minnesota Republican Party and St. Louis Park resident, said she is pleased the mayor supports reinstating the pledge but that other council members’ votes were a “shock” to her.

“I’m a newer resident to St. Louis Park and also as an Asian-American I felt the decision was the opposite of inclusive. It was actually exclusive,” Carnahan said. “I’m really proud of America and everything the pledge and the flag stands for.”

It it not necessarily uncommon for a city not to say the pledge before a public meeting. Though the city of St. Paul and many suburbs do say the pledge (including Golden Valley, New Hope, Eden Prairie, Bloomington, Shakopee, Minnetonka, Plymouth, Richfield, Brooklyn Park, Maple Grove, Blaine, etc.), others like Minneapolis, Hopkins, Edina and Robbinsdale do not.

St. Louis Park, however, is the first municipality in the Twin Cities in recent memory to actively vote to remove the pledge from public meetings. To be clear, under city policy, the pledge could still be used during presentations like the Boy Scouts Color Guard.

Mayor Spano said that, as of now, the current no-pledge policy at the start of meetings remains in effect. However, following more discussion of the issue, Spano believes it is possible another vote could happen as early as August.

St. Louis Park officials said the mayor and council are aware of the President’s tweet and are focused on the work of the city. They added there aren’t any new developments since last night.