Retired Marine Richard Holly was disappointed with the cancellation of Twin Cities Marathon, but he found another, more personal reason to run more than 26 miles. 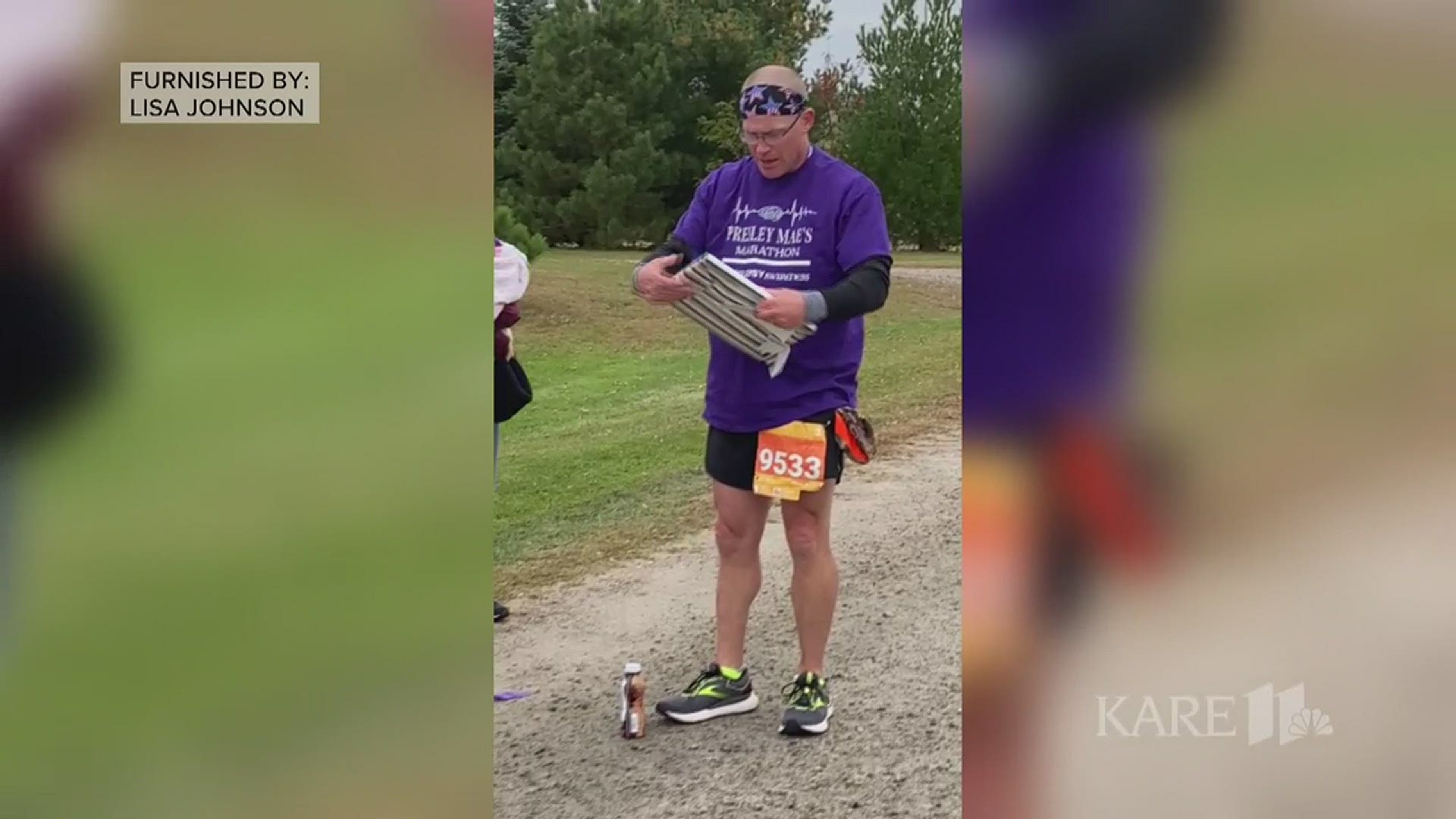 Completing a marathon is not a huge deal to Richard, as he's tackled four of them. The retired Marine, now a corrections officer at the Minnesota Correctional Facility at St. Cloud, didn't start running until 2012 and recalls barely making a mile the first time he laced up his shoes. Still, there was something about it he couldn't shake.

"Something inside me... I'm going to keep up with this and see how far I can go," he recalled thinking. "It stirs up something with you. Nobody else is going to cross that line but you, you've got to give it everything you've got... it's just inspiring."

But running, and just about everything else took a back seat in Holly's life last Christmas, when newly-arrived granddaughter Presley had a major epileptic seizure after coming home with his son Dylan and daughter-in-law Sheila. The tiny child was rushed off in an ambulance, first to St. Cloud and then to Children's Hospital in the Twin Cities, where Presley remained for weeks. It was clear that her situation hit Holly hard.

"Rick is the kind of guy that would give you the shirt off his back," wrote his son's mother-in-law Lisa Johnson. "When Dylan called him on Christmas Eve that Presley had a 35 minute long seizure and told him they were on the way down by ambulance to Children’s Hospital in St. Paul, he was in that car, drove there and spent the entire night and into the day Christmas Day to be there for her and them.  It was very touching. Great man."

Credit: Holly Johnson
Ricky Holly comforts his granddaughter Presley as she lay in the hospital following a major seizure.

In January, Rick was beginning to plot his training for TCM when he found new inspiration for this year's run: he would do it for Presley, and to raise awareness for others who live with epilepsy. "What better way to raise awareness, and signify something. She's just a baby, but somewhere down the road she'll realize Grandpa did something for her."

"She's my inspiration, a little child," he said, his voice breaking. "They want to wake up each morning, and to live."

The Twin Cities Marathon, like many iconic Minnesota events, was canceled by the COVID-19 pandemic and switched to a virtual format. Richard kept training, running mile after mile with granddaughter Presley on his mind.

When Oct. 3 came, the weekend TCM was supposed to take place, Richard Holly strode out from his home in Milaca on a 26.2 mile course he laid out that would wind over the back roads of central Minnesota, and end at Presley's home near Pierz. He physically ran alone... but in truth, he was not.

What Holly didn't know is that Lisa Johnson, his daughter-in-law Shelia and his wife Jeannette had organized a marathon support squad. They created a Facebook page to chronicle his mission, and on marathon day placed motivational signs and pictures of Presley every couple miles of the course.

And to Holly's surprise, they recreated the big Twin Cities Marathon final stretch, albeit on a much smaller scale.

"All of a sudden, half a mile left, I come to the top of the hill and I hear people cheering, music playing... it was my own finish line," he recalled. "TCM is dear to me, but this took the cake."

The crowd was wearing custom t-shirts that read "Presley Mae's Marathon." Richard was handed a framed print with the epilepsy ribbon on it and the slogan "life never gets easier... we just get stronger." Stuck to the print was a Post-It note written in the spirit of 11-month-old Presley. "Papa Rick, this is my chance to say thank you for doing this for me. One day, maybe I will be able to run with you."

His family also gave Holly a custom-made medal, which he immediately put around Presley's neck. "She's the one running a lifelong race," he said. "There will be some life-long things with this."

"It was truly  inspiring to see this grandpa at the age of almost 54 years old do this," wrote Lisa Johnson in a post that alerted KARE about the story. "The emotions were very high at the finish line for everyone. I wanted to share this because... here is something amazing that this grandpa from the small town of Milaca, MN did in honor of his granddaughter that is running her own lifelong marathon."

The fact that he spent his day off Tuesday volunteering to paint a church tells you a lot about Richard Holly. He makes it clear that the miles he endured were not about him or the canceled marathon he loves running, but about Presley and the journey that lays ahead for her. While he admittedly missed the beauty of the urban TCM course, the camaraderie shared with fellow runners and a crowd in the hundreds of thousands, the retired Marine wouldn't trade this year's experience for anything.

"Number one. Honestly, number one. It has more meaning and more of an impact than I ever could have imagined."

OTHER NEWS: 5-year-old reaches goal: visits 67 waterfalls after COVID-19 shuts down her preschool